While American eyes have been focused on the 2022 midterm elections, Russia has been conducting a civilian-targeted campaign in Ukraine, aimed at critical infrastructures such as the power grid and water utilities, with the goal of inflicting as much civilian misery as possible as winter returns to the region. 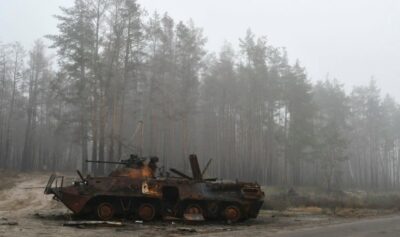 Russia has likely lost half its tanks, used up most of its precision-guided weapons and suffered tens of thousands of casualties so far in its war against Ukraine, the Pentagon’s top policy official said Tuesday. Image by The Hill.

But into the horror of this continued unprovoked war, Russia announced Wednesday that it was withdrawing forces from Kherson, a key city in southern Ukraine.  Ukraine and President Volodymyr Zelensky is skeptical and say they haven’t seen any movement yet.

If this is true, and it hasn’t been confirmed, it could spell a humiliating setback in Russian President Vladimir Putin’s attempt to expand his idealized version of the vanished Soviet empire. It would take Russian forces from defensive lines on the western banks of the Dnieper River, back to the eastern bank.

Ukrainian officials still aren’t sure if this withdrawal is true or not (which is why the West isn’t sure either). But if it is, it is the culmination of a weeks-long Ukrainian drive to take back Kherson (one of its most important cities) during which Russian troops began to relocate more than 100,000 Kherson residents (most against their will) further into Russian-held territory.

In an unusual announcement, Russian Defense Minister Sergei Shoigu made a televised announcement on Russian television that he was withdrawing 100,000 Russian troops from the eastern banks. He said that Gen. Sergei Surovikin, the overall commander of Russian forces in Ukraine, had proposed taking up defensive lines on the eastern bank of the river.

“We will save the lives of our soldiers and fighting capacity of our units. Keeping them on the right (western) bank is futile. Some of them can be used on other fronts,” said Surovikin.

Where those fronts are, he didn’t say. But it appears that ordinary Russian citizens are growing increasingly nervous about Putin’s war. After his announcement that he was calling up 300,000 men to add to the country’s troop strength, thousands of men left the country rather than be drafted into a military that they see as failing.