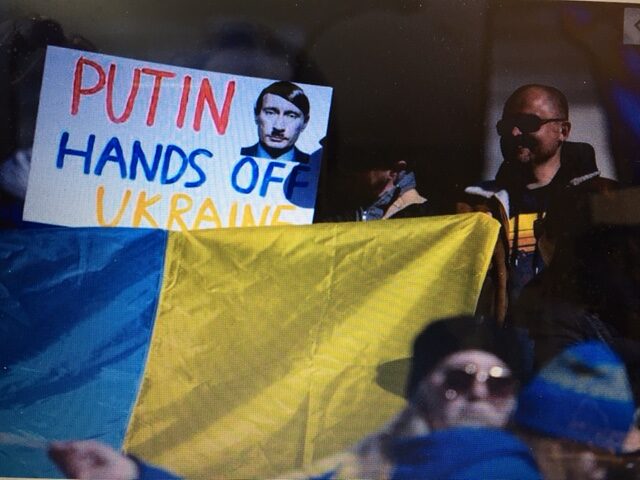 As a fact-based news media, Ark Valley Voice is aware and leery of social media disinformation campaigns. We source-check our information and try very hard to make sure that the truth has a voice. So today, when we received slanted information from questionable sources about the invasion of Ukraine by Russia, our antenna went out.

This happened only a few hours before we heard that today, Facebook has taken down dozens of pro-Russian social media accounts from Russian trolls and Russian bots, identifying them as part of covert influence campaigns. Many included fake images of cities of Ukraine surrendering. In the United Kingdom, platforms have blocked two major Russian propaganda sites; both Sputnik (a Russian government-controlled propaganda machine) and RT (Russian Times).

Russia is on day-five of an unprovoked invasion of its sovereign, democratic neighbor. According to Russia, Ukraine has no reason to exist. The Ukrainians and the world overwhelmingly disagree.

For most of us, disinformation is coming at us through social media. But this morning, we received two communications with a pro-Russian slant.

The first from something calling itself CODEPINK, claimed to be from a peace group (www.peaceinukraine.org)  that announced it would hold a peace rally this coming March 6 in several places across the U.S. Now peace organizations aren’t new, and we are surely in support of peace. But its stance wasn’t just peace; it promoted the idea that Ukraine and Russia fall back to the Minsk II agreement of 2015 and advocated no NATO expansion as if NATO pulling back would stop Putin’s drive for power. This might be entirely sincere. Or not.

The message, which said “What does Russia want and how has NATO responded?” was clearly dated from BEFORE Russia chose to invade Ukraine this past week. It too appeared to advocate that Ukraine and Russia fall back to the Minsk II agreement of 2015, and it also suggested that NATO do no more expansion.

This could be a coincidence. Or, as we suspect, it may be something more. At this point, all of us should question information coming at us from unfamiliar sources.

Minsk is the capital of Belarus, which has already aligned itself with Russia leadership. That 2014 and 2015 Minsk agreement was over the relatively small separatist conflict in the southeastern Donbas region of Ukraine — it set out a 12-point ceasefire deal that includes things like both sides removing their weaponry from conflict areas (Now how would that work? Would Ukraine send its weapons to Poland?) and both agree to an immediate bilateral ceasefire (Now what country wants to get in the middle of this and enforce a ceasefire? How on earth do they do that — tell Ukrainians to go home and set up the Russia troops in the town community center?)

This isn’t a civil war over a border region — it’s a wholesale invasion.

Just ten days ago, a helpful reader emailed me a link to Sputnik (a Russian government-controlled propaganda machine) suggesting that we should be wider-read and that we weren’t understanding the whole picture. We beg to disagree.

A week ago Ukrainians were sipping coffee in cafes, going to school, falling in love, playing with their children, taking walks, looking forward to the future. Almost overnight they have been transformed into a war setting making Molotov cocktails and laying down their lives for their families, their freedom, their homes, and their country.

“If Ukraine does not survive, we can be sure that democracy won’t as well.”

Featured image: Protestors demonstrate in support of Ukraine on the steps of the Colorado Capital on Feb. 24. Photo courtesy of Denver Gazette.