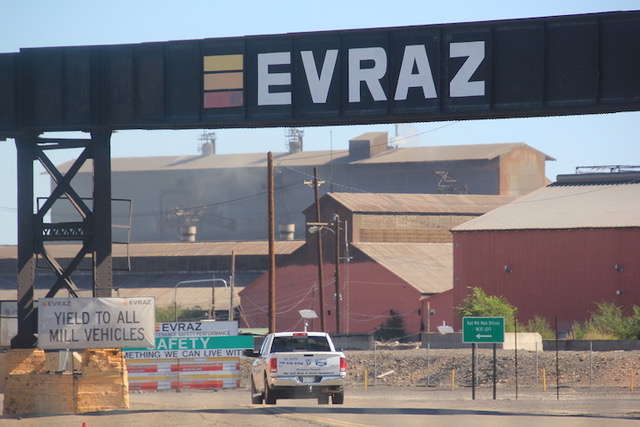 Putin crony Roman Abramovich’s ownership of London’s Chelsea soccer club has been crimped by sanctions levied by the U.K. The Colorado steel mill of which he is a major owner is operating as usual—for now.

In the early 20th century Pueblo’s steel mill was owned by American oligarchs, John Rockefeller Jr., the descendants of Jay Gould, and others. Might ownership of that steel mill—and Colorado’s largest solar array—revert to American ownership as a result of the Russian war against Ukraine?

Now called Evraz, the steel mill is owned primarily by Russian oligarchs, with Roman Abramovich having the largest stake.

The United States has not yet imposed sanctions on Abramovich, unlike the United Kingdom and Canada. That leaves his ownership stake in the Pueblo steel mill intact as well as his ownership of two houses in Snowmass Village.

In Pueblo, there are doubts that the mill could end up being cut off from its Russian owners because the product is for the domestic consumption, not for export.

But then Chelsea, the soccer club in London that Abramovich owns, is no longer selling tickets, the result of sanctions applied last Thursday by the United Kingdom. As long as Russia’s war against Ukraine continues, ownership of the plant in Pueblo will remain an active question. 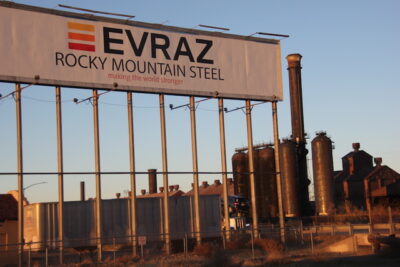 Evraz North America, which operates the steel mill, is a wholly-owned subsidiary of Evraz, a company incorporated under laws of the United Kingdom, with shares traded on the London Stock Exchange—until Thursday, March 10.

In sanctioning Evraz, the British government accused Roman Abramovich, the largest shareholder, of being a “pro-Kremlin oligarch” who has received preferential treatment and concessions from Putin and the Russian government and “is or has been involved in destabilizing Ukraine and undermining and threatening the territorial integrity, sovereignty and independence of Ukraine.”

The statement also accused Evraz of “potentially supplying steel to the Russian military, which may have been used in the production of tanks.” In response to a Financial Times inquiry, the company insisted it only made steel for the “infrastructure and construction” sectors, the Financial Times reported.

The Financial Times last Friday also reported that 10 members of Evraz had resigned after the United Kingdom’s action.

Canada last Friday also imposed sanctions on Abramovich, and on Tuesday so did the European Union.

Within hours of the Russian invasion of Ukraine, the United States imposed actions against several Russian oligarchs and institutions, but not Abramovich nor Evraz.

Five Russians own two-thirds of Evraz’s shares. Second to Abramovich in holdings is Alexander Abramov, a former scientist who founded it in 1992. The other three are also Russian oligarchs, reported the Pueblo Chieftain in a March 5 story.

An oligarch is defined as a very rich business leader with a great deal of political influence. An oligarchy is a country ruled by oligarchs. Forbes in 2021 ranked Abramovich as 12th wealthiest among Russia’s billionaires, with a net worth of $14.5 billion.

Evraz also has steel, mining, and vanadium operations in Russia, the Czech Republic, and Kazakhstan.

In the United States, Evraz has mills in Pueblo, which has 1,100 employees, and in Portland, Ore. It also has five mills in Canada, three in Alberta and one in Saskatchewan, according to its website. Evraz also has scrap operations, including one along the South Platte River north of downtown Denver.

Nowhere has there been even a suggestion that the Pueblo steel mill or other operations in North America have directly supported the Russian war effort.

The Pueblo mill primarily uses recycled steel to make its products, which requires a lower temperature than is necessary when using iron ore and other raw resources. Foundry operations became electrified in the early 1970s, the result of construction of the nearby Comanche 1 and 2 coal-burning units.

Early last November, a 298-megawatt solar farm was completed on land owned by Evraz between the steel mill and beyond the Comanche units. This allowed the steel company to proclaim that it had become the first solar-powered steel mill in the world, as Big Pivots explained. Financial and other details of that claim have never been made public.

The investment in the solar farm hinged upon plans to go forward with construction of a $500 million mill that will make quarter-mile rail segments that Union Pacific, Burlington Northern-Santa Fe, and other railroads want. The construction project may employ 400 to 500 people.

Jeffrey Shaw, chief executive of the Pueblo Economic Development Corporation, says the impact to Pueblo and the steel mill there appears to be nil.

“We have asked what the impact of the global geopolitical front will be to the facility, and the answer we have gotten back (from Evraz) is—consistent with what has been reported—that they are moving forward with the facility,” he says. He also points out that the market for the products of the steel mill is domestic, not foreign.

Driving by the mill, construction work continues with no evidence of slowdown. “We’re very optimistic that it will carry on” as planned, he added.

The Pueblo Chieftain story by editor Karin Zeitvogel reported no changes evident at the steel mill in early March. “We haven’t seen anything yet, and everything is just like it was a week ago,” said Eric Ludwig, president of the United Steelworkers 2102 Union, a week after the invasion.

The Evraz annual report for 2021 noted the cloudy global horizon, referring to Ukraine five times and potential for sanctions nine times. The report mentions the “worsening situation relating to Ukraine and heightened risk of the economic sanctions.”

In modeling, the company also described a “severe downside scenario” that could cause it to reduce capital spending by $500 million a year.

Might that include the work on the new Pueblo mill? No mention there.

Abramovich was the focus of a lengthy New York Times article on Sunday that explored his ties with the United States and other western countries. An orphan who grew up in a town along the Volga River, he dropped out of college and then emerged from the Red Army in the late 1980s just as the Soviet leader Mikhail Gorbachev was opening new opportunities for private enterprise. Abramovich, says the Times, thrived as a trader—of almost anything and everything, it would seem.

The big break for Abramovich came in the mid-1990s, when he and a partner persuaded the Russian government to sell them a state-run oil company for $200 million. In 2005, he sold his stake back to that government for $11.9 billion.

His holdings include the Chelsea soccer team in London, which he bought in 2003 and which he was frantically trying to sell last week before the UK sanctions. The sanctions prohibit the club from selling tickets to matches.

The Times said leaders of cultural, educational, and medical institutions, along with a chief rabbi, had sent a letter urging the United States not to impose sanctions on Abramovich, a major donor to Jewish and other causes.

A request to the American ambassador to Israel “reflects the extraordinary effort Mr. Abramovich, 55, has made over the last two decades to parlay his Russian fortune into elite standing in the West,” said the Times, going on to describe his houses, his artworks, his yachts, his private 787 jet, and more.

Abramovich’s name is also prominent in Aspen, reported Rick Carroll of the Aspen Times. Lettering on the outside of a synagogue on Main Street in Aspen suggests Abramovich and his now ex-wife Dasha were major donors.

Russia’s oligarchs have “used their ill-gotten gains to try to launder their reputations in the West,” Thomas Graham, a Russian scholar from the Council on Foreign Relations, told the New York Times. “But the message of these sanctions is, that is not going to protect you.”

Michael McFaul, an American ambassador to Moscow during the Obama administration, described disingenuous behavior on several sides. He told the Times that while Putin’s government claimed to despise the United States and its allies, his foreign ministry was constantly trying to help the oligarchs around him, including Abramovich, obtain visas so they could ingratiate themselves with the Western elite.

“On our side, we have been playing right along,” he said, overlooking ties of the oligarchs to Putin and welcoming them and their money.

Sources also told the Times that the relationship that Abramovich and other oligarchs enjoyed with Putin cut both ways. After Putin was inaugurated president in 2000, he quickly moved to dominate the billionaires who had profited from privatization, sending a message by jailing the richest and most powerful oligarch. Abramovich is one of the few early elites who remained in Putin’s circle.

Putin’s display of force, however, also gave oligarchs freedom to establish ties in the West—as potential places to land.

As for Pueblo, it’s had ups and downs in the last 141 years it has been making steel. The mill was a consequence of Pueblo having rail connections, water, and proximity to coal, iron ore, and limestone. Coal mines at Crested Butte, Redstone, and elsewhere supplied the smoke-belching mill that was then called Colorado Fuel & Iron (CF&I).

CF&I was owned by American-born oligarchs of their day. A smaller figure was John Cleveland Osgood and the larger names were John Rockefeller Jr. and Jay Gould.

There have been downsides for Pueblo, too, including a bloody strike in the coalfields south of Pueblo in 1913-1914. The strike culminated in the deaths of 21 miners and their families, including two women and 11 children in what is remembered as the Ludlow Massacre. In 1921, a flood killed at least 78 and likely many more while swamping the downtown district and other low-lying areas.

The steel mill at one time employed 12,000 people and, by the 1970s, paid handsomely and gave months-long vacations to employees with greater seniority. Going into 1990, CF&I teetered into bankruptcy. It was acquired by Oregon Steel in 1993 and the name was changed to Rocky Mountain Steel Mills.  In 2007, it and other Oregon Steel holdings were acquired by Evraz for $2.3 billion.

Featured image: Much of the old CF&I plant at Pueblo remains standing even as a new long-rail mill goes up. For now Evraz-steel-mill in Pueblo, CO. continues to operate. No one knows for how long. Photo by Allen Best.

This article by Allen Best has been published with his permission. Best focuses on the energy and water transitions underway in Colorado. His weekly postings can be found at BigPivots.com.

(See his full biography below.)