During a packed county commissioner meeting agenda on Feb. 4, the Chaffee Board of County Commissioners upheld the temporary moratorium on construction of any projects with a residential component within an area surrounding the Salida Airport, Harriet Alexander Field, voting unanimously to prepare a resolution extending the moratorium to Feb.4, 2021. Following that resolution will come a public hearing process, allowing the public to weigh in on the creation of a long term Airport Overlay District. 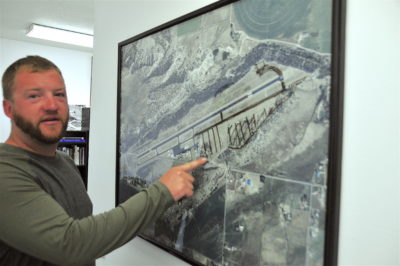 Airport manager Zechariah Papp indicates areas of potential expansion of the Salida Airport, especially after federal funding is secured for an expansion of the shorter taxiway at the field.

The airport is owned jointly by Chaffee County and the city of Salida. The moratorium exists to limit development that would endanger the airport’s funding from the Federal Aviation Administration (FAA). The possibility is not just academic. Last year a proposed live-work project in the industrial zone area to the south and west of the airport drew the attention of the FAA, which cautioned the county that it might endanger the federal funding the airport receives.

The FAA says that it discourages residential construction close to airports for some legitimate reasons. First, residential units near airfields and runways are a public safety concern. Second, allowing residential development near airports brings with it noise complaints. Even though it is obvious that building a home near an airport will expose residents to noise, residential density tends to garner complaints because of the noise of takeoffs and landing approaches.

Commissioners and staff discussed whether a study might be required.

County Assistant Attorney Daniel Tom suggested that a joint work session with the Airport Advisory Board, the Chaffee County Planning Commission, the Salida City Council and Poncha Springs Trustees would be wise. The combined group could discuss the protections offered by airport overlay districts and how best to proceed with creating a Salida Airport overlay district.

“After we adopt the overlay plan, then we can drop the moratorium,” said Tom. “Because the overlay would protect land uses within that zone. We could restrict those uses not compatible with an airport.”

Chaffee Board of County Commissioners approved the contract between the state of Colorado and Chaffee County to fund the 2020 Small Business Development sub-center (SBDC) in Salida.

While the main small business development center for the region is in Gunnison, in 2019 the state granted a work order establishing the sub-office in Salida to serve Chaffee, Lake and Park counties, its fifteenth full-time center. The center is hosted by Chaffee County and supported by the Chaffee County Economic Development Corporation.

Led by Jamie Billesbach, the office has been busy from the start. “We had 89 small business counseling sessions just in the amount of time the office has been in operation,’ said Billesbach. She added that some of the programming, such as a recent program on small business use of social media, has been well received in some of the counties. “We had 21 people attend it in Park County, but only eight in Lake County.” But she added that in Park County she has a rural opportunities person with whom to connect and encourage participation.

The motion to approve the $55,000 base contract (which was originally only partial year funding) was made by Commissioner Rusty Granzella, seconded by Commissioner Keith Baker, and passed unanimously.

Director of General Administration Bob Christiansen noted that as the year goes on, it is likely the dollar amount will be raised to $70,000 to 80,000 to cover the full year operation of the SBDC. The business development investment is shared by Chaffee, Lake and Park Counties, with Chaffee contributing 60 percent, and Lake and Park counties each contributing 20 percent of the operational cost.

For more about the SBDC visit: https://arkvalleyvoice.com/central-mountain-small-business-development-center-opens-in-salida/