An effort underway by the Salida Circus Outreach foundation aims to raise $2,000 in funds to underwrite the visit to Salida of Red Noses Palestine, planned for March 12 to 22. While the project has been in the works for the past 18 months, it is only in the last few weeks that a variety of hurtles, including visas, have been resolved to allow the group to travel to the United States for this special visit.

“This project has been a year and a half in the making because it is not easy for Palestinians to travel,” said Salida Circus founder, CEO and Development Director Jennifer Dempsey. “All the pieces have finally come together at the last minute. Therefore, I am doing a last ditch attempt at fundraising in order for their visit here to be a success. It’s important people know that all the donations received go directly to fund these free workshops and performances here in Chaffee County at our local elementary, middle and high schools, Salida Circus will receive nothing itself.” 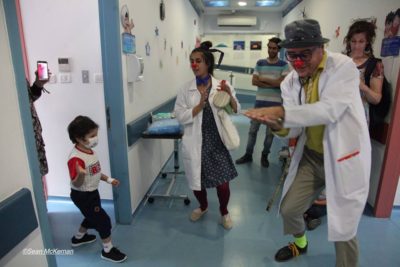 A visit by Salida Circus with Red Nose Palestine at the Beit Shala
Hospital in Bethlehem in June 2017. Photos courtesy of Sean McKernan.

Red Noses Palestine is a troupe of clown doctors who visit sick and suffering Palestinian people in hospitals, schools and refugee camps throughout the West Bank. The Salida Circus Outreach Foundation has received a travel grant from CEC Artslink, a New York-based foundation to underwrite their travel, which will bring their unique brand of clowning to the Chaffee County community. The free presentations will include not just at local schools, but Box of Bubbles and other community centers.

The collaboration between Red Noses Palestine and Salida Circus of Colorado seeks to dispel myths, stereotypes and misconceptions of a culture that is increasingly alienated from the western world perspective.“Red Noses Palestine’s workshop called “The Clown in You” will be brought to local schools and community centers, offering Colorado’s youth and adults a unique opportunity to work and creatively play with a group of Palestinian artists who live in a very different context, but employ the same social justice tools of art and laughter,” explains CEC Artslink in their grant award.

Dempsey said the association with Red Nose Palestine (which operates in a manner similar to the Patch Adams program that visits hospitals to lighten medical environments operating in difficult conditions in countries around the world) actually came about because of a Salida Circus visit to Jordan in 2016. They got into a taxi and discovered their taxi driver, who had no idea he was transporting Salida Circus members, was a member of Red Nose Palestine.

“I had the privilege of going with them to a hospital visit in 2017 to a hospital in Hebron,” said Dempsey, who described the grinding poverty and stark conditions of life on the West Bank. “Not only do their visits impact the sick and injured children who get up and dance and laugh, [but you could also] see the relief for the parents and the doctors. It was indescribable, to see their child happy. The doctors hugged them, ask their names, ask them to return. The hospitals are at a standard there that would shock Americans. These hospitals need this joyful spirit from these visits so desperately.” 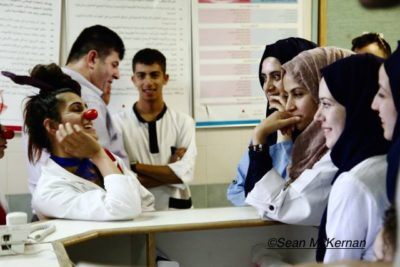 Dempsey said that the trust and long-term collaboration with this group is growing over time. Their artistic director Tarek Abzoun came to the Salida Circus 10th anniversary in May 2017, and she visited the West Bank hospitals in June 2017.”That led to Salida Circus being invited last October 2018 to the first Bethlehem International Performing Arts Festival. We were one of 13 International performing arts groups invited to it.”

Dempsey says that so far they have received $945 of the $2,000 needed to fund a base per diem for the group to perform in Chaffee County. They will stay in private homes. With her birthday looming, she’s asked friends and those who’d like to help underwrite the event to make tax-deductible donations to the 501(c)(3) nonprofit Salida Circus Outreach Foundation. The foundation’s purpose is to provide circus training to children and adults in Chaffee County as personal development, providing a creative play, community-building tool in a nurturing, non-competitive environment.

Donations should be directed to  http://thesalidacircus.com/donate.