During the Salida City Council’s regular meeting on Tuesday evening, it approved resolution 2021-07 which adopts the US-50 and CO-291 intersection control evaluation study that was done in partnership with the Colorado Department of Transportation and the City of Salida. 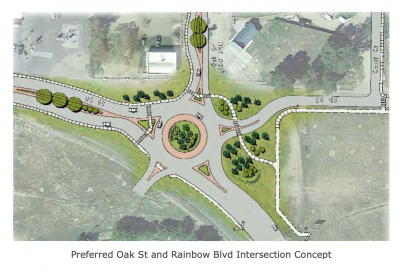 The consultant for the Colorado Department of Transportation (CDOT) did multiple comprehensive traffic counts as well as analysis based on growth and development plans as well as future projections for traffic at the intersection.

The most desired alternative intersection configuration is a five-legged roundabout. This roundabout will still accommodate large semi-trucks. Depending on funding, construction is predicted to start in 2022 with streetscape improvements predicted to begin this year.

That evening the council also voted to approve the designation of April as Child Abuse Prevention Month. Monica Haskell spoke before the council and brought along her daughter to show her how council meetings are run.

“This year is an interesting year. Our numbers have significantly increased for refers coming into child welfare, level of abuse has increased,” said Haskell. “With the pandemic stress is high and so I think it’s even more important now to put the word out there and to get people to come together to support everyone so that our kids can have a safe place in our community to live.” The council voted to approve the proclamation along with the display of a blue ribbon on “S” mountain.

During reports, Councilmember Critelli brought up complaints from members of his ward with traffic speeds around town. “Mostly they’re coming from F street or where the Monarch Spur trial intersects.” Council plans to discuss options to mitigate these concerns.