On October 5, the Salida City Council voted to approve Ordinance 2021-15 with amendments discussed by both the council and planning commission. This ordinance made amendments to chapter 6 and 16 of the Salida municipal code concerning short-term rentals. As Salida is currently facing a housing shortage, this ordinance is viewed as a step to help with this crisis.

According to the city, STR units have been shown in various studies (and via anecdotal evidence locally) to have direct and indirect impacts on both the availability of long-term housing as well as housing affordability. These impacts generally arise when existing units are converted from long-term rentals (or owner-occupied homes) to STRs, as well as when both new and existing units are sold at prices considerably higher than they would have been sold without the additional STR revenue potential. The financial incentive to build new units for short-term rentals, specifically, may also preclude the development of future long-term housing stock. 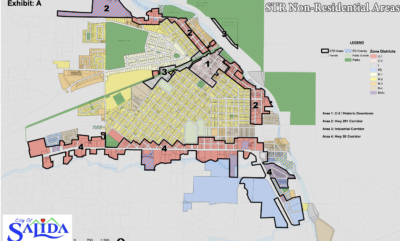 A map outlining non residential areas that are included in this ordinance. Image courtesy of the City of Salida.

The city also acknowledged that STRs are not the sole reason for the recent depletion of existing long-term housing stock. Sales of homes to those who work remotely, retirees, or vacation homeowners, among other factors, have also contributed to the reduction.

This was the final reading and public hearing on the ordinance where members of the public spoke both for and against the ordinance. Many encouraged the council to pause on the ordinance, while others claimed it would not make a significant dent in the housing shortage.

After the public hearing, council discussed the suggestions made by planning and zoning as well as some of their own ideas. They approved the ordinance with city staff and planning commission comments.

Changes to Chapter 6 of the ordinance:

Planning Commission recommended an exception to such area caps, similar to that for the residency requirement and per Council discretion, based upon the provision of substantial Inclusionary Housing units. City staff have been directed to fine tune the language for council to approve in the future.

“That works for now and that will bring us forward,” explained Mayor P.T. Wood in regard to the exception to these caps.

Changes to Chapter 16 of the ordinance:

Council decided that the clause about residency needed more attention and it was removed from the ordinance so staff could revise the clause and bring it back to the council at another time.

Also on the agenda was ordinance 2021-16 which extends a temporary moratorium on the submission, acceptance, processing, and approval of any application for a short-term rental license and declaring an emergency. Council voted to approve this ordinance which was extended until November 8.