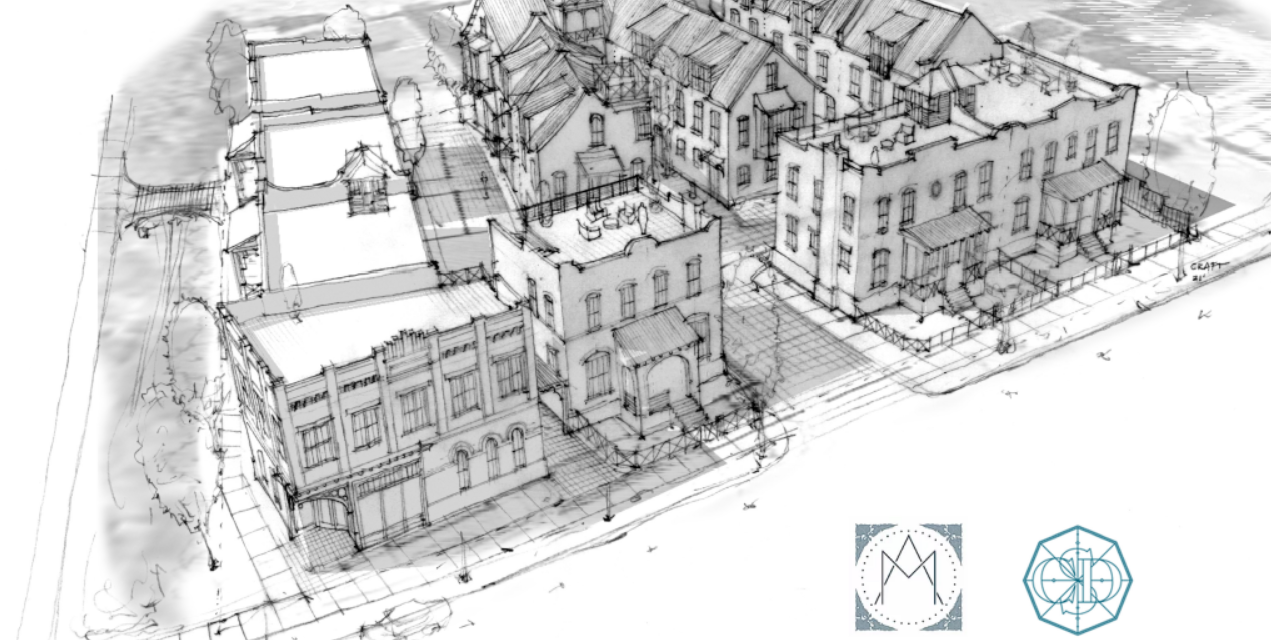 The Salida City Council will meet in regular session at 6:00 p.m. on Tuesday March 15 and the complete packet is here.  The consent agenda includes multiple special event permits, language modifying the “Measurement Focus and Basis of Accounting” in the City’s financial policies as well as a Bid Rejection for the Pasquale Springs Improvement Project.

The meeting continues with a new liquor license hearing, a first reading of two proposed ordinances and concludes with reports from Council, Staff and the Mayor.  The Treasurer’s report will include sales tax collections and commentary for the month of January. 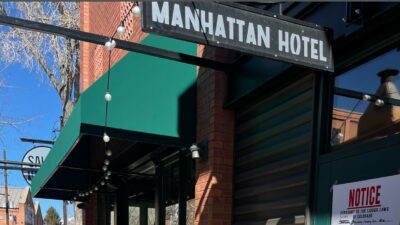 Sitting as the Liquor Licensing Authority, Council will consider a new Brew Pub Liquor License for the Salida Brewing Company (SBC), Inc. at 228 North F Street, Suite 200 for Ray Kitson. The license would permit SBC to make and distribute beer.

SBC will not be brewing the beer itself, but rather, have a 3rd party contractor brew it for SBC. The operation will be run out of office space as there is no need  for specialized space on F Street. Instead, the 3rd party brewer will make and store all products at their own facility, which will in turn be self-distributed in the Salida area.  The application does note the location of three (5-gallon) pieces of ‘home brew equipment’ in the 228 North F Street space.

Applicant Kitson currently holds other liquor licenses as separate entities and operates the Boathouse Cantina, Pizza Rio and other businesses out of the Manhattan Hotel location, along the Arkansas River and the F Street bridge.

Continuing the process of numerous meetings with stakeholders, staff and the Planning Commission, Council will take up a number of significant amendments to the Land Use Code.  Community Development Director, Bill Almquist says these “are intended to strike a balance between the great need for permanently affordable housing units of varying types and prices and the economic realities of developing property…” If approved at this first reading, a public hearing would be set.

Expanded tools in the City toolbox to substantially ramp up inclusionary housing would include, among others:

By the end of 2021, the median sales price of a home in Chaffee County was approximately $560,000—up from approximately $430,000 just a year prior (an increase of over 30 percent).  Accelerating the urgency for change, 2022 has shown no letting up thus far and anecdotal information and other data indicates that there is also an acute need for rental units up to approximately 100 percent AMI.

The proposed amendments to the LUC seek to address these needs with expanded definitions and availability. Planning Commission voted unanimously (7-0) to recommend approval of this ordinance with amendments from the original language. 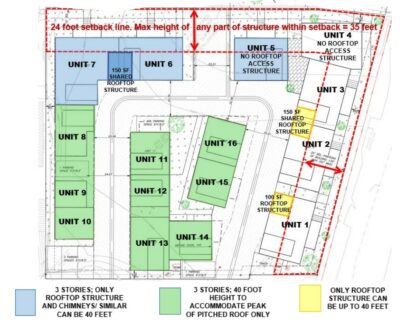 Illustration of Planning Commission conditions of approval for building height and stories deviation as agreed by the applicant and incorporated into the PD Plan. Image courtesy of City of Salida and applicant

This is a highly visible, dense, and complex, mixed-use project at First and I Streets at the Monarch Spur Trail scheduled for first read at the March 15 council meeting.  The site is the historic location of the Salida Bottling Works, currently leased to the City as an unpaved public parking lot.

As proposed, the project would include a Planned Development overlay and a 16-lot subdivision with one commercial unit at the eastern edge of the downtown Salida business core, with allowances for greater density and height. Fifteen townhomes and one residential condominium are proposed, all for-sale units. They range in size from approximately 800 -1,400 square feet and from 1-3 bedrooms.

Salida City Planner Kathryn Dunleavy will show the evolution of the project concept including modifications made since Planning Commission’s recommendation to approve (with major conditions); enhancements added since that approval on  February 8.

Overall, according to staff findings, “This is a transitional area between historic downtown, industrial, Highway 291 Commercial, and residential uses. The character of the development is in line with the character of the existing neighborhood by providing historically relevant and complementary architecture, enhancing the streetscape and pedestrian experience of the area, and providing a commercial space along with residential density appropriate to its location adjacent to downtown.”

Staff findings go on to say; “while The City of Salida does not have architectural design standards that apply to this location…the proposed architecture is intended to complement the existing, historic downtown in its building form, materials, and details. The siting of the building frontages, as well as the architecture are meant to relate to the Salida Bottling Works building that was formerly on this site.”

In addition to height and density beyond what would currently be allowed, one atypical aspect is that the developer seeks to provide private water and sewer facilities beyond the connection within Hwy 291 (as opposed to City-built).  This raised concerns from utility providers and necessitates, for safety reasons that all utilities be provided at one time. This translates to the fact that no additional gas lines will be allowed to be added after construction is complete.

Feedback from City department heads did not indicate any major concerns with the application beyond the conditions noted.  Within the context of this proposed planned development overlay for townhomes, staff may be asked about the potential use of any units as Short-Term Rentals (STR’s).

Viewscape studies looking east, west and south along First Street do not appear to indicate significant losses, however, the overall mass of the project, versus the current vacant lot may be “felt” by passersby.  If approved on first reading, a public hearing will be set for  April 5, 2022.

After registering, you will receive a confirmation email containing information about joining the webinar.

To simply watch the meeting “LIVE”, click on the City’s broadcast channel.