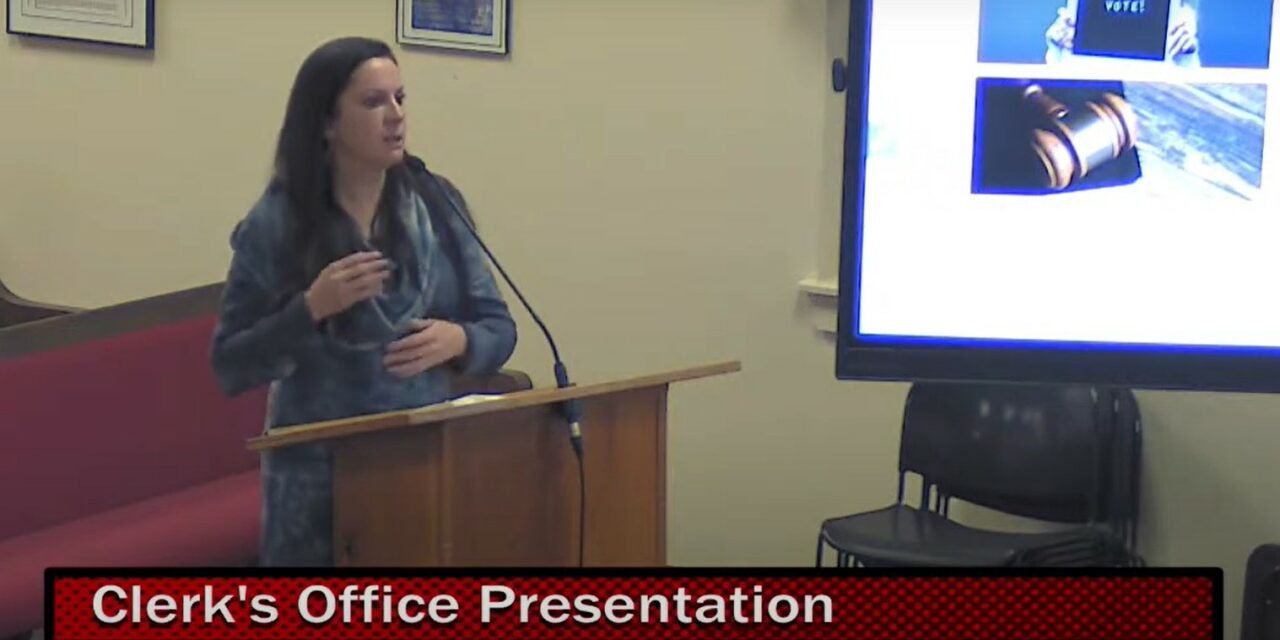 The Salida City Council met in a combined session on Tues. Nov. 1. While the regular session agenda seemed straightforward, with ordinance 2022-19 continued to Nov. 15 and another (a zoning clean-up matter) on first reading, considerable time was spent on a public hearing for an amplified sound permit.

City Clerk Erin Kelley and Deputy City Clerk Sara Law gave a brief slide show presentation during the work session on the functions of their office. Kelley began with some history of the role of the City Clerk (when they were called “Remembrancers”.) 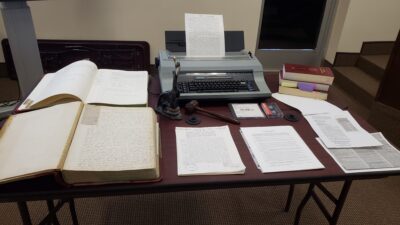 A display of tools, records and exhibits from Salida City Clerks over the years. AVV staff photo

Kelly displayed historic record books, an old city embossing seal, and page-marked volumes of the Colorado Revised Statutes (C.R.S).  She explained the progression of recordkeeping from the days of inkwell pens and cursive handwriting, through a quaint “correcting” typewriter to today’s computerized word processing and database systems.

While the tools have changed, “we secure the past so we can understand the future,” said Kelly.

The goal is to provide transparent, accurate, and timely information and, with the municipal court, to support the Justice system both fairly and efficiently. Deputy City Clerk Law handles short-term rental licenses as well as municipal court matters including traffic and code citations. Law said that the small number of juvenile court cases this year have had a 100 percent completion rate for the court-ordered classes through Full Circle Restorative Justice.

Asked to comment on the volume of transactions, City Clerk Kelly noted a five percent increase in the volume of Colorado Open Records Act (CORA) requests that were completed within the three-day turnaround goal. In addition, amplified sound permit applications are new this year; handling and tracking those takes significant time, but has freed council members from repeated public hearings for each venue.

Treasurer Merrell Bergin asked about any formal certification program for the clerks. Kelly highlighted a three to four-year program that both clerks are going through, offered by the International Institute of Municipal Clerks (IIMC). Their Certified Municipal Clerk (CMC) designation requires member-candidates to “affirm and practice” the IIMC Code of Ethics and complete a thorough set of requirements. This includes experience on the job as well as education points earned by attending training sessions and conferences offered by the Colorado Municipal League and state association.

In a small city such as Salida’s, the full-time jobs of both clerks come first; certification efforts require time spent after long days covering the office. 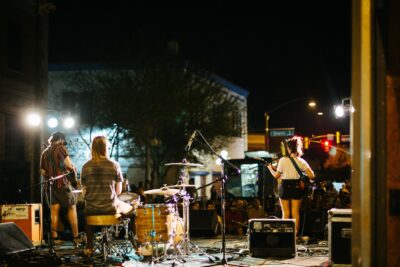 Tres Litros Beer Company at 118 North E Street had applied for an amplified sound permit earlier in the year and received administrative approval for a maximum of 60 events (the city maximum) during the season. Through October they had used some 50 of those events, but since they were asking for five additional outdoor events during November (outside of the “season”), this triggered the city’s public hearing requirement.

City Administrator Drew Nelson said that there had been discussions regarding a recent complaint trend (across several venues). After the 10:00 p.m. cutoff for music, venues have then had their doors and windows open, emanating music.

Nelson noted that the city does not regulate indoor sound levels for any establishment.

Tres Litros owner Nick Boyden acknowledged that they would have doors and windows closed after 10:00 p.m. “out of respect for their neighbors.”  He also said he had access to a decibel meter to check sound and was trying to cover all the bases.

A series of downtown residents then spoke expressing concerns about noise levels. Suzy Patterson, who lives further west on Sackett spoke for a friend who lives across from Tres Litros. She asked to see that “the businesses and the citizens enjoy it [Salida] together without getting at each other’s throats”.  She asked for enforcement of existing decibel levels and ordinances so people can enjoy their homes peacefully. “I don’t want to see Salida turned into another Las Vegas, she concluded.

Susan Spohn at 111 North E Street said that she and her husband Ralph Parker had lived there for thirty years. While her remarks exceeded the three-minute time limit, her main points referred to (noise) “trespass”.. that sound was invading the inside of her house, causing them headaches and lack of sleep. “Music should be contained in their establishment,” she said. “Residents are not given notice when permits are granted (unlike special events in years past).” She added that calls to Sheriff’s Dispatch were not responded to.

Patrick and Sarah Regan at 214 East First Street (around the corner from Tres Litros) said that they are trying to see both sides of the issue and asked about any plans for the number of permits allowed going forward. Susan Regan said that any sound travels due to dense downtown areas and the river.

Forest Whitman added that one neighbor had left the downtown area as a result of noise.  “How can we damp this down?  We can live with it, just not all the time … 60 events are a lot,” he said. 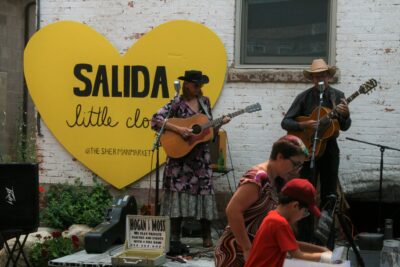 In support of the permit, local attorney Chris Scoggin at 12th and E Street said “it’s only 60 of 365 nights…not even 15 percent of the time..We’re a creative district and need to encourage it.”

BETCH Housing advocate “Salty” Riggs expressed concern that the council had earlier this year appeased local music fans, saying they would make it easy for outdoor event permits and are now frustrated that hearings were required.

Applicant Boyden responded “We are trying to be mindful of what our neighbor’s interests are. We are also citizens of Salida too and trying to make a living…trying to foster a great place for community.”

Administrator Nelson said that a maximum of 85 decibels is the sound limit and that law enforcement measures the levels on complaints. He asked residents to call  Sheriff’s Dispatch as needed to investigate, noting that law enforcement responds as their resources permit. There are no anticipated changes in the number of permits at this time.

In council discussion, members spoke of the need for balance and that the core of downtown (this area especially) is and has been primarily commercial. Council member Critelli said that adjoining businesses produced “the sound of people making a living…and he could not limit their prosperity.” He suggested the possibility of sound barriers as public art as one solution.

Mayor Shore expressed hope that conversations would continue between businesses and citizens. With council members generally in support of the current permit program, a motion to approve the permit, through November, 2022 was made by Justin Critelli and seconded by Harald Kasper, which passed unanimously.

It should be noted that given this summer’s experience with outdoor sound, cumulative events, and the challenge of self-regulating indoor sound that this may not be the end of downtown residents’ concerns. Some fine tuning of current ordinances may be in order.

According to the packet materials, the Planning Commission reviewed the request at a public hearing on October 24 and unanimously recommended rezoning the lots along the Arkansas from their current mix of R-3 and R-4 to R-3. The four applicants subsequently indicated (in writing) that they consent to rezoning the subject lots to either R-2 or R-3.

After minimal questioning by the council members, discussion focused on the completeness of the information and reports by city staff and planning. It was noted that single-family uses are also permitted by administrative review in that area and they may be best suited to the narrow, constrained lot geometry and the topography of this site. The motion passed on first reading to rezone to R-3, with a public hearing for November 15.

After hearing brief reports, council members made a motion to go into Executive Session “for the purpose of discussing potential development of city-owned property and related development agreement for affordable housing purposes.”