Meeting in a combined work session and regularly scheduled meeting, members of the Salida City Council moved swiftly through their agendas on Tuesday, Jan. 3, 2023.

Mayor Dan Shore first welcomed Abby Peters, newly hired Program Director for the EDC. Peters explained she would like to attend future Council meetings to listen and learn. Prior to Executive Director Jake Rishavy’s arrival, Peters previewed a look ahead at 2023 EDC initiatives and responded to questions from Mayor Shore.

Rishavy then gave a brief presentation outlining progress against their 2022/2023 Strategic Plan. He explained there are three primary focus areas in their plan – Startup/Scale-up Support, Talent Pipeline/Work-Based Learning and Public Policy Advocacy. Regarding the first focus area, he reported that a local group of 12, high-net worth individuals in the county have formed the Ark Angels investor network which is interested in supporting local business growth.

The group’s first three investments have been made, including one in DifferentKind a public benefit, “B” Corp, based in Buena Vista, supporting better outcomes in dental practices.

The local investors pooled funds with the Colorado Office of Economic Development and International Trade (OEDIT) and lead investor, the Greater Colorado Venture fund which specializes in rural economies. Rishavy stated that the new business is now up and running.

Rishavy went on to reveal a recent announcement by the Colorado Department of Local Affairs (DOLA). He noted that “an additional $150,000 grant [has been made] to the EDC to make direct technical assistance grants to participants in our [Chaffee County] business accelerator programs.”  The EDC provided a match of $30,000 in local investor money to receive this grant, providing all-new money in the local economy.

Also Rishavy said that the EDC business accelerator program (Central Mountain Ascent), is launching its second year with a soon to be announced, new cohort. The public is asked to save Jan. 19 for a planned event at the Salida SteamPlant which aims to connect local businesses with investors, partners, and thought leaders. 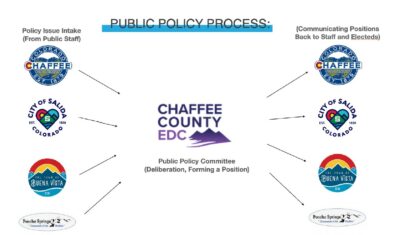 Rishavy announced that March 2 and March 3 have been set aside for a special “Powder Pitch” program at Monarch Mountain. In addition to formal sessions, entrepreneurs, investors and mentors will be paired up to literally “ride the lifts”, enjoy cat skiing and explore opportunities for mutual benefit.

Rishavy then touched on growing the local workforce from within, through the use of internships, apprenticeships, and skills-based learning. He noted that the EDC has received a $30,000 grant from Freeport-McMoRan and their Community Investment Fund to support bringing together the school systems, Colorado Mountain College and businesses to grow and develop the local workforce.

The EDC will use its public policy committee to regularly review public input for economic impacts, deliberate on it, form consensus positions, then feed that back to staff and elected officials.

Rishavy said that adding Abby Peters to the EDC staff with time to attend city meetings will help facilitate the cycle of input and output. Mayor Shore suggested that Peters should consider attending work sessions as well, as that is the forum where it is most effective, prior to formal council actions.

In the ensuing regular 6:00 p.m. meeting, while a quorum was present, council members Templeton, Critelli and Naccarato were absent due to travel conflicts. Seated members of the council passed the Consent Agenda with no further discussion.

During Public Comment, long-time resident and former council member, Cheryl Brown-Kovacic read a prepared statement, praising the proposed amendment to the Civility Invocation. The language, contained in Resolution 2023-02 later passed unanimously reaffirming the Invocation. It now includes: “We affirm our support for women’s rights, including equal pay, equal treatment under the law and in the workplace, and the right to determine choices that impact the direction and personal values of one’s life, including all individuals’ reproductive health choices.”

A pair of ordinances (2023-01 and 2023-02) were discussed regarding adjoining parcels owned by Lundberg and Sons Properties LLC and Virginia Castro at 601 Scott Street and 745 Scott Street, respectively. The request from both applicants is to annex their properties to the city, as a next step, following approval in 2021 and 2013, respectively, of pre-annexation agreements.

The companion ordinance (2023-02) requested that High-Density Residential (R-3) zoning be granted for both parcels. Both ordinances moved forward to a final reading and public hearing, now set for Jan. 17, 2023.

Both Resolution 2023-01 (an annual requirement to designate a primary location for the posting of public notices) and Ordinance 2022-26 (charging water and wastewater system development fees (SDF) on all Accessory Dwelling Units (ADU) with water and/or wastewater connections, whether available for rental or not) passed with no further discussion.

With no Council reports, the meeting concluded at 6:21 p.m.