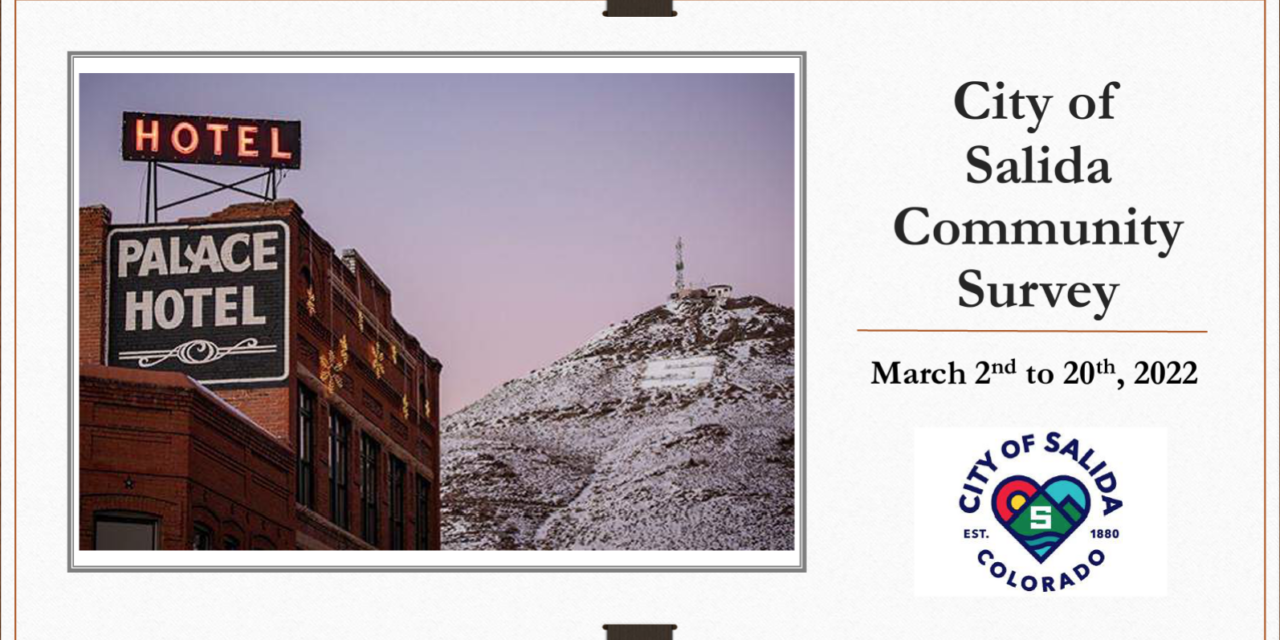 Affordable housing, managing population growth and development, and maintaining town character ranked among the top five issues, priorities, or problems that Salida’s residents felt the town should be addressing. The community survey, conducted in March of 2022, saw 1,222  responses, with responses weighted to be representative of Salida’s adult population.

When asked whether they feel the City of Salida has been moving in the right direction over the past five years, 41 percent said Yes, 34 percent said No, and 25 percent said they weren’t sure.

One respondent (Female, 18-24, born in Salida) pointed to “Massive growth and issues overcrowding, high-density living, etc.” as some of Salida’s biggest issues. “The city needs to evaluate building permits thoroughly before approval.” 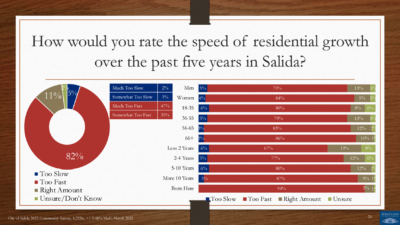 One respondent (Female, 36-45, living in Salida 5-10 years) suggested that an “Air BnB moratorium would provide more rentals for people who actually live and work here. Stop allowing entire developments to be all short-term rentals for Texans. It’s pretty simple really, allow a much smaller [number] of short-term rentals/investment properties.”

Another (Male, 46-55, living in Salida more than 10 years) suggested the city “Help developers by reducing some fees for high-density affordable housing,” while others suggested creating incentives “to convert short term rentals to long term rentals. Create a local property tax for non-residents to fund construction of affordable housing.” 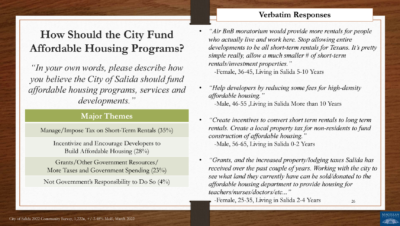 Courtesy of the City of Salida, Magellan Strategies.

Though residential growth was overwhelmingly marked as too fast, 36 percent said they found commercial growth to be too slow over the past five years, and 42 percent felt it is growing at the right pace. Only 16 percent felt it was growing too fast.

Salida residents also feel that the town could be dedicating more resources to transportation-related needs. 59 percent of respondents said they would want to see more resources dedicated to downtown parking, 58 percent pointed to bike lanes, and 56 percent said regional transportation needs more support. Respondents also expressed a desire for more resources to be set aside toward new sidewalks and improved streets, safe routes to parks and schools, and in-town shuttle services.

A strong majority (67 percent) of respondents were against implementing paid parking in the downtown area, and 76 percent were in support of downtown residential areas receiving free overnight parking permits. 85 percent of respondents listed a car as one of their major modes of transportation, with just over 50 percent marking walking and biking.

However, the respondents’ strong desire for more downtown parking also comes with 80 percent supporting the two-block F Street closure. The city has implemented the road closure to vehicles, transforming the area into a well-used pedestrian street, for the past two years, and has confirmed the closure for this year.

The survey results are available on the City of Salida’s website. For demographics, more detailed results, and other information, check out the available slides.

Editor’s Note: It should be pointed out that a stated goal in the Chaffee County Comprehensive Plan, is planning for housing density to occur in and immediately adjacent to the existing population areas, as opposed to sprawl into the rural areas outside the cities and towns. This goal is focused on maintaining the historical rural and agricultural character of the county.