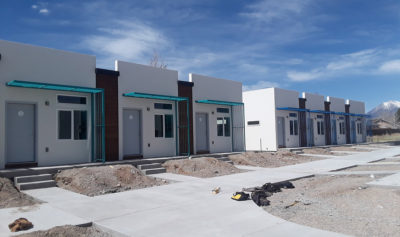 Construction of the BlueJay Apartments at 1030 J St. is complete, and landscaping is underway. For a limited time, developers Paige and Joe Judd are offering free rent for the first month for tenants at the new apartment complex (courtesy photo).

Salida City Council approved an agreement with Paige and Joe Judd that will facilitate affordable-housing units at the BlueJay Apartments, 1030 J St., by allowing the Judds to avoid up-front water and sewer tap fees.

The agreement is structured to reflect the commercial tap fees incurred by the Judds at the recently completed 505 Apartments on Illinois Avenue, specifically, $81,600 for five commercial ¾-inch taps to supply the BlueJay Apartments.

The Judds recently completed construction of the 505 Apartments, a near-identical 19-unit development for which the city issued commercial taps.

Approaching completion of the apartments at 1030 J St., the Judds said they expected the same fees for the BlueJay and experienced sticker shock when they were told they would need multi-residential taps.

The Judds have stated at multiple public meetings that having to pay those rates would limit their ability to offer rental rates that qualify as “affordable” under federal guidelines for Chaffee County. They have also pointed to the high rate of staff turnover under the previous council and the ensuing loss of institutional knowledge as a factor in the 330-percent increase in tap fees.

The agreement approved by city council contains several requirements, including:

• Nine apartment units will be rented (a) at rates appropriate for households earning 80 percent of average median income or less for 10 years and (b) only to people employed in Chaffee County.
• If the project is sold within five years or the nine units are rented above the 80-percent AMI within five years, the owners will reimburse the city the difference between the multi-family water rates and commercial rate.
• Three of the rate-restricted apartments must be leased to households earning 80-percent AMI or less. 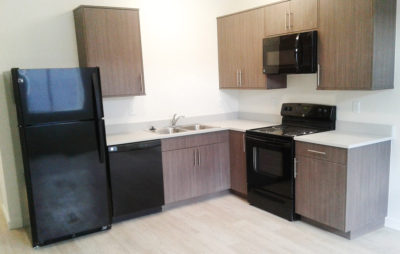 The kitchen of one of the BlueJay apartments is furnished with cabinets and countertops from Rocky Mountain Cabinets and Countertops and appliances ordered from the local Sears store. Altogether, Paige Judd said they have spent “about 85 percent of our budget with Chaffee County businesses” (courtesy photo).

When council members deliberated the resolution, Cheryl Brown-Kovacic said she believes the difference in tap fees, $192,760, “should come out of the Economic Development Fund. …

“One of the issues here is we don’t have $192,000 in the Economic Development Fund, but certainly that fund was set up as a way for us to reimburse the Water-Wastewater Fund when we did give an incentive to developers.”

Councilman Mike Bowers said he couldn’t support the agreement. “I think it’s foolish to go against what the ordinance was and open up more avenues for this ‘Let’s Make a Deal.’ I understand we need affordable housing. I’m not opposed to that, but I think this is the wrong approach to attain it.

“And I’m really getting a little bit tired of people wanting to use the affordable housing as a carrot … to get around some of these resolutions and ordinances that have already been passed.”

“We had the 505 Apartments. They ended up being commercial taps. Now we’re at the J Street and we’re consistent in what we’ve done. … I guess I have to stay consistent with the way we voted in the last two years.”

Councilman Dan Shore said he understands the “time crunch” on this agreement but expressed a desire “for us to be able to take a step back and focus more on long-range policy” and continue the conversation about “looking at this through the Economic Development Fund rather than the Water Enterprise.”

Brown-Kovacic added, “Pretty much the only incentives we have (for affordable housing) are impact fees … and the idea was we would use that Economic Development Fund to reimburse the city Water and Sewer Fund so that we would not short it.

Since approval of the project, the Judds have announced that they are offering the first month of rent for free for a limited time.