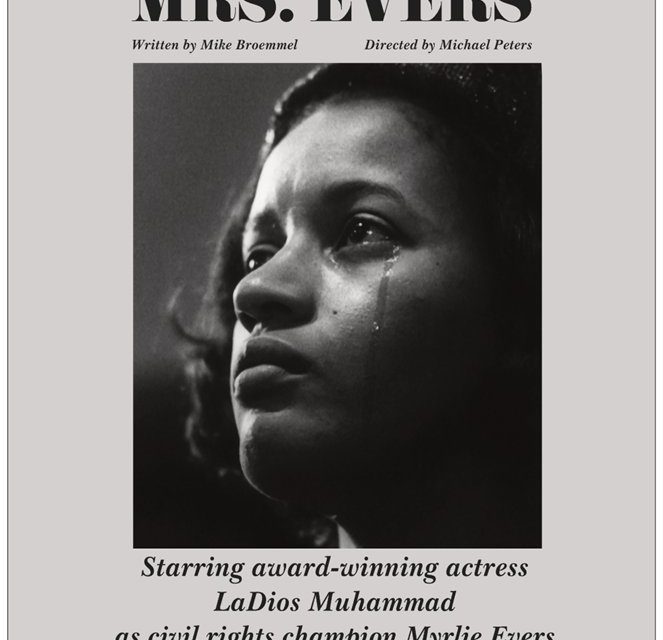 Call Me Mrs. Evers, a new play by Denver-based playwright Mike Broemmel, had its world premiere with performances for Salida middle- and high school students earlier this week and will have two repeat performances at Box of Bubbles in Salida: at 7 p.m. Friday, Feb. 15 and 2 p.m. Saturday, Feb. 16.

Call Me Mrs. Evers is based on the life and achievements of Myrlie Evers-Williams, the widow of civil rights activist Medgar Evers, who was assassinated outside their home in Jackson, Mississippi in 1963. At the time, Evers was the Mississippi field secretary for the National Association for the Advancement of Colored People (NAACP), organizing voter registration drives and civil rights demonstrations. The play tells the story of how she battled for three decades to bring her husband’s assassin (white supremacist Byron De La Beckwith) to justice. Her own activism in the political and civil rights arenas included serving on the board of the NAACP, and three years as its chairperson from 1995 to 1998.

Mike Broemmel wrote the one-woman play as part of his “Iconic Women’s Theater Series,” including another one-woman show, Stand Still and Look Stupid: The Life Story of Hedy Lamarr, which has also been brought to the Salida area by local performer and producer Jennifer Dempsey. Broemmel refers to both Lamarr, Hollywood actress and brilliant inventor, and Myrlie Evers-Williams as two of his heroes: “They both faced significant hardships – which for some would have been insurmountable – and they went on and accomplished meaningful important things.”

Broemmel had Denver actress LaDios Muhammad in mind for the role, and wrote it especially for her: “This is the fourth play of mine she’s been in,” he said, “and I thought she was perfect for Myrlie.”

Muhammad collaborated with director Michael Peters for over two months to bring the role of Myrlie Evers to life. Peters has a personal connection to the story of Myrlie Evers: his father, the Rev. James David Peters, Jr., was also active in the civil rights movement and marched with Martin Luther King, Jr. “He knew Myrlie Evers in passing,” Peters said, “and he told me stories about things.” Still, much of the history of Evers’s activism came as a surprise both to him and Muhammad as well.

“I knew nothing about Myrlie Evers,” said Muhammad. She said to prepare for the role, “I went through a lot of videos and read her autobiography. I gained an incredible amount of respect for both Everses.”

Both Muhammad and Peters see the play as an important tool for spurring dialogue about civil rights, race relations, and their respective roles in the telling of American history. Muhammad referred to the play’s reception at Salida High School as “an absolute joy”: “(We saw) people touched and crying and asking what we can do to make a change.”

Peters said that students of all ages asked the same question: “Why did they kill Medgar Evers?”

“They didn’t understand it,” he went on, “and we couldn’t explain it – the level of racial hatred.”

Peters sees the play as a way for audiences to gain some insight into, and appreciation for important but overlooked actors in African-American history, saying that people often have a reductive view of the heroes of the civil rights movement: “You have Martin the Peaceful and Malcolm the Violent, (referring to Martin Luther King Jr. and Malcolm X, respectively). We’re not talking much about (people like) Medgar.”

Muhammad concurred, saying that she didn’t learn about major historical figures in the abolition movement such as Harriet Tubman and Sojourner Truth until attending a historically black college (HBC). “There’s other people who contributed to our history besides Malcolm and Martin,” she said.

The play’s performances include a “talkback” with the actor and director after the show, about the issues it raises. Peters notes the importance of this part of the performance for initiating dialogue: “Racism did as much damage to white America as black America. (But) it’s hard to heal a person who denies he’s sick. America has to admit that this sickness needs to be addressed.”