SMT Board President Mike Smith explained “We are thrilled to have Jon take the reins at SMT. SMT has accomplished so much over the years thanks to incredible volunteers, and we’ll now be able to accomplish even more with a dedicated staffer.” 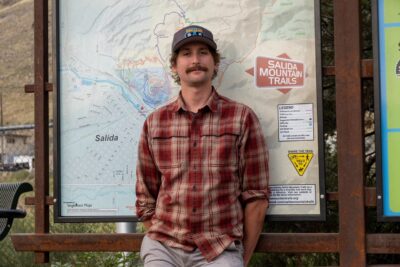 Terbush joined SMT over the summer and will be formally introduced at the organization’s annual member party and fundraising auction on Saturday, October 9. The event is being held outdoors at Hutchinson Ranch Wedding and Events in Salida from 5:00 p.m. to 8:00 p.m. Admittance to the event is free for SMT members.

“Salida’s trail network is the number one reason why I moved here. SMT has done a tremendous job developing this system, and I am truly overjoyed and honored to be tasked with stewarding it into the future,” Terbush said.

Terbush moved from Denver to Salida in January 2020. In addition to his role with SMT, he is the communications and development director for the Boston Cyclists Union, a nonprofit that advocates for bike lanes and promotes bike ridership in Greater Boston. He has previously worked as the communications manager for a bike share company, and in various reporting and editing roles over a decade in journalism. Born in Michigan, Terbush grew up in New England and lived in Boston for many years before moving to Colorado.