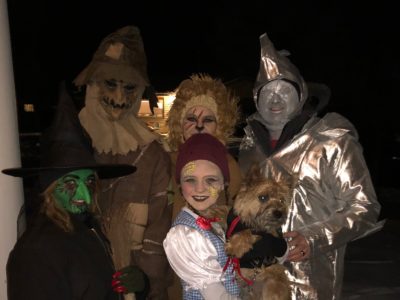 After a week of cold and snow in which temperatures barely reaching the 30s for most of the week, things warmed up a bit in Salida by Thursday, allowing Halloween trick-or-treaters to gear up to purse Halloween candy.

Salida reached nearly 50 degrees by mid-day Thursday. Although many wore their snow jackets under costumes as they went out that evening, the weather wasn’t enough to stop Salida locals from participating in the Halloween festivities.

The cast of The Wizard of Oz and the cast of Toy Story 4, all in search of Halloween candy, greeted Salida locals on their doorstep Halloween night. The two families shared their group costumes with Ark Valley Voice. 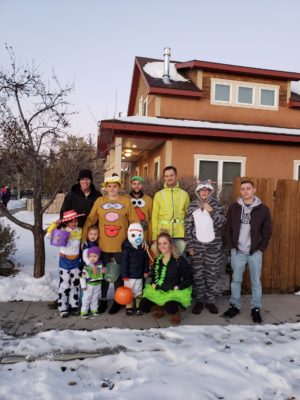 The Clinton family explained that they try to do something with a group costume theme every year. This year they dressed as the cast from The Wizard of Oz, while last year they went as characters from Alice in Wonderland. One house they stopped at along the way was that of the home of Salida artist Pat Smith, who’s dog, Fred, just so happened to be part of the theme, dressed as Toto.

Another Salida local family dressed as characters from the movie production Toy Story 4, showing what fun group costumes can be while trick-or-treating with family. Given the theme, there was no shortage of characters to choose from. Among their characters were Buzz Lightyear, Jessie, Little Bo Peep, Forky, and Mr. and Mrs. Potato Head.

The blankets of snow from the storm that took place on Oct. 27 and again on Tuesday, dropping several inches across Chaffee County, didn’t seem to put a damper on the town’s Halloween celebration.

Costumed kids in search of candy roamed the downtown area during late Thursday afternoon stopping at participating Salida Business Alliance retailers who were handing out candy, many others making a stop at the Community Center for treats. Others, such as these two families, spread out across the community, in what appeared to be a safe and happy Halloween.