On June 2, Fun Street Arcade unveiled its new youth-driven mural. This project began in 2019 but due to COVID-19 was put on hold. The project was made possible by Mothers Against Drunk Driving Colorado (MADD), Rise Above Colorado (RAC), FYI, and Chaffee County Youth Alliance.

Jonathan Judge of RAC explained “Rise Above Colorado works with young adults across the state and we’re upstream prevention so murals like this really speak to community building. It’s important to us to have youth and their voices integrated into the project, start to finish.”

Josie Anderegg, one of the teens who participated in the local mural project explained, “Our vision was to encompass what the town meant to the kids and what we wanted our mural to look like because this is our arcade where we hang out. We picked a couple of things that matter most to our town and he came up with a cool design.”

Rebecca Green of MADD explained  “Mothers Against Drunk Driving Colorado was looking at their youth outreach program and wanting to engage young people differently around the state and realized that this generation of young people can really use their voices in ways no previous generation has. We kind of decided to look at ways for young people to share their voices in their own communities and this mural project idea popped up.”

“We have a state office in Denver but much as we provide services to everyone, we don’t have small offices in every community. So, we wanted a way to let people know that there is support out there but to let young people take the lead on what they want their community to be known for and what they want to share with their own spaces,” she added. 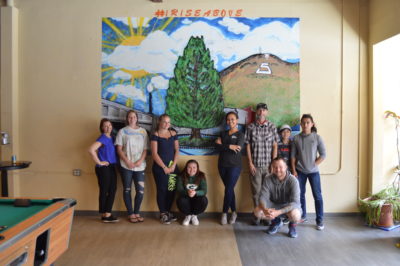 Green continued “We found Rise Above Colorado; they have been amazing and able to do the heavy lifting. The whole project is funded by State Farm. We’re really excited to finally have this project done. It’s been a long time coming.”

“So, it began as Rebecca said, with that brainstorming, creating a concept, turning that concept into a design, getting feedback and showing up and making sure the youth have the opportunities to step into a really friendly environment, regardless of skillset, have some ownership over the process. We had the ability to do that thanks to Scotty [Hughes], local nonprofits, and most importantly the youth that are showing up and giving of themselves,” added Judge.

Anderegg then explained the various elements depicted in the mural “The F Street bridge because it’s one of the bigger parts of town, the tree which is in one of our parks that we hang out at all summer, downtown because it’s touristy and it’s what most people come here for and then S Mountain.”

Alexia Wilkins, another teen who helped paint the mural said, “Most of us have been here all of our lives so these are three, four monuments that everyone can see that actually has a deeper meaning behind it or has a memory tied to it.”

“It’s super awesome especially for our group in general because we have a huge group, it’s not even friends at this point, it turned into a family,” said Wilkins. “They’re my family and it’s awesome. This is where we come and hang out.”