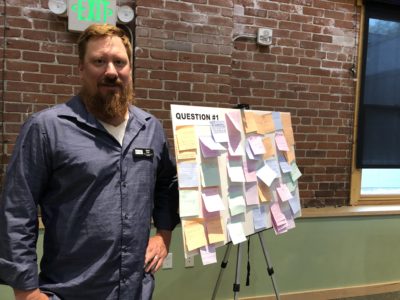 First on the agenda for the new Salida Parks and Recreation Director, will be the development of a new Parks, Recreation, Open Space and Trails (PROST) Master Plan. A plan that Post calls a “Fully community-invested Master Plan.”

Post worked in education for 15 years and is the former principal of Chaffee County High School in Buena Vista. He holds a degree in Parks and Recreation from Penn State. His new position, says Post, is a throw back to what he calls being “in his element.” Post doesn’t just talk recreation, he has had an active role. Earlier in his career, Post spent time as a rafting guide in Arizona, California and Colorado.

Post says he is excited about the minimal commute and no longer facing challenges in getting to work like he had in commuting to Buena Vista to lead Chaffee County High School.

Post said he’s looking forward to leading the Recreation Master Plan effort. He stressed that it isn’t just a staff exercise. ” We need all citizen input…in the hopes of getting as many thoughts, hopes and opinions by getting people to the table…that’s my job.”