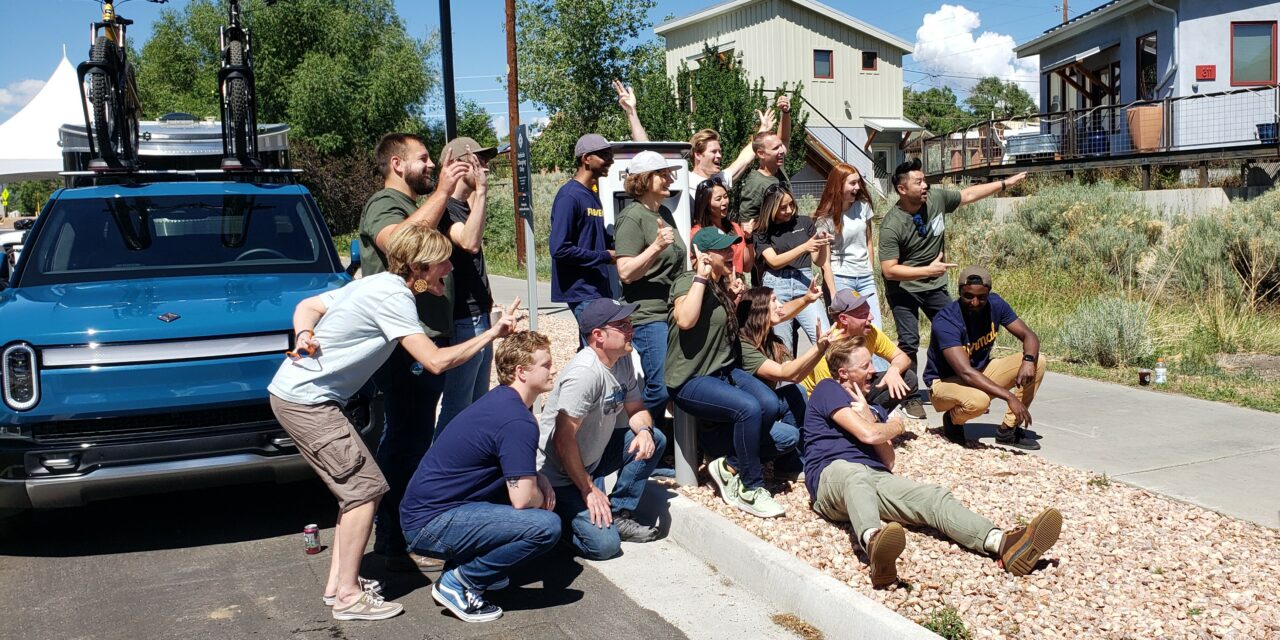 Under crystal blue skies, a small, invited crowd from Rivian and the city mingled between the Safeway store and the Monarch Spur Trail  Monday morning, along with passersby on foot and on bikes. At 11:00 a.m. on June 27, history was made when the first Rivian Adventure Network charging site in the world opened to the public.

The site on the west side of 232 G Street features four high-speed Rivian chargers, including a pull-through charger to accommodate vehicles towing trailers.

Rivian’s Senior Director of Energy and Charging Solutions, Trent Warnke delivered inspiring insights about the company’s holistic mission, answering the questions many have about the immediate and long-term costs and benefits of EVs. Beyond just making leading-edge, sport electric vehicles, Rivian felt they needed a complete system solution: their own charging stations and beyond.

Warnke said that their vehicles are emission-free of course, but “we need to go further and do more. Our charging networks are powered by 100 percent renewable energy. All of the electricity supplied to these chargers on an annual basis is procured renewable energy.”

With a nod to Salida’s rich railroad history (near the very spot where the charging site is located), American electric vehicle maker Rivian is bringing a new era of clean transportation to the 21st century. The invited guests at the unveiling seemed to concur that there couldn’t be a better location, than in the “Heart of The Rockies” in Salida where locals and visitors are always geared up for adventure travel with their dogs, bikes, kayaks, and campers. One lucky family (who recently arrived in Salida) already has what is believed to be the first resident vehicle in town.

The site also hosts four “Level 2” Rivian Waypoints chargers, which are available for use by any electric-powered vehicle (EV) – not just Rivian vehicles – through the Rivian smartphone app.

Located just one mile off the major east-west U.S. Hwy 50, Salida’s “Rainbow Route”, the site is at the gateway of Salida’s Historic and Creative Districts at the Arkansas River. Only one block away, Salida offers many things to see and do, including the arts, dining and maybe even a short hike or bike ride while charging.

The history of the project goes back some three years when former Mayor P.T. Wood was approached by Rivian. The firm felt that thanks to its natural beauty and abundant nearby recreational opportunities, Salida would be an ideal location for Rivian’s first, fast charging site. At the same time, Rivian was planning and building the R1T (Sport Truck) and R1S (Sport Utility) vehicles, as well as developing commercial fleet delivery vehicles for Amazon and others.

“I could see the impact of EV charging on the future of Salida,” said Wood. “I wanted my community to be at the forefront of that transition from (from gas to electric power).” 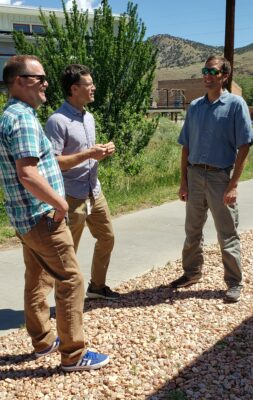 Working with City Administrator Drew Nelson, Public Works Director David Lady, Planning Director Bill Almquist (all on hand for the launch on Monday), the concept evolved into a multi-year lease with Rivian for a portion of the city-owned parking lot. Lady noted that Rivian Construction Manager, Ashley Broek “was very organized, did her homework and made it easy” for staff to package up a presentation to Council (which was quickly approved).

Then came winter 2022, with worldwide supply chain issues to deal with. Final work on the launch has been completed in the last two weeks, just in time for the best of summer travel. The project was accomplished through the hard work of a team from Main Electric Ltd. (Pueblo, CO), with the oversight of HTS EV from Ohio, the premier installation contractors of electric vehicle charging stations.

What It Means To Salida and The World

In Monday’s ceremonial launch, Salida resident (and Rivian employee) Diane French introduced current Salida Mayor Dan Shore who was quick to note “he was in the right place at the right time”, thanking former Salida Mayor P.T. Wood (2017-2021) for his leadership and vision to create a real economic driver with Rivian. 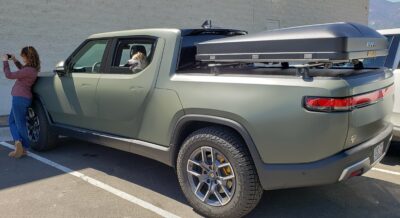 “It’s an opportunity for people to get off the highway so they can really see the true essence of this country and get back into the wild,” said Shore.

Adding to the large turnout from the city were: Council Members Harald Kasper and Alisa Pappenfort, Treasurer Merrell Bergin, Parks and Recreation Director Diesel Post, Arts and Culture Director Michael Varnum, Finance Director Aimee Tihonovich, and Planner Kathryn Dunleavy. Members of the Salida Police Department dropped by earlier to admire the assembled group of still-rare vehicles commenting … “just make sure that they were in good hands.”

“We are working with others to put new renewables on the grid to make the grid cleaner as we go along,” said Warnke.  “There’s even a wind turbine at our factory in Illinois. So the very first charge of every single vehicle will be with 100 percent, on-site renewable energy.” 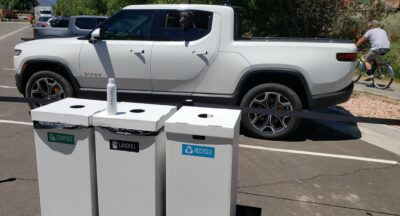 As their press release said, “integrating these (vehicle and charging network) solutions into a company-wide sustainability strategy is a foundational step on our path toward net-zero carbon emissions.”

For many of the Rivian staff and support teams, this was their first visit to Salida. Arriving from remote work sites and bases in Southern California to Illinois and  Michigan, they appeared impressed with the area and especially with the community’s welcome. “My family will be back” Warnke said, echoing the talk among the diverse group of largely young and active Rivian team members who were clearly excited to be on hand.

Happy Campers ready to set off on new adventures in an R1T Sport Truck with camper accessory. Merrell Bergin photo

Rivian expects that Colorado-based Rivian owners (there is a lengthy waiting list of course) will soon make the journey to Salida to be among the first to use the new Adventure Network. A friendly, aficionado Rivian “cult” of sorts exists already and rumors that “Rivian Dad” from YouTube was here will only increase the excitement for more people to discover Salida.

After that? Salida-based artist Mike Buckley has been commissioned by Rivian to create a massive mural on the west wall of the Safeway, perhaps with an appropriate, celestial motif. Stay tuned.

Rivian’s communications materials say that it exists “to create products and services that help our planet transition to carbon-neutral energy and transportation.” It designs, develops, and manufactures category-defining electric vehicles and accessories and sells them directly to customers in the consumer and commercial markets. But it doesn’t stop there, Rivian “complements its vehicles with a full suite of proprietary, value-added services that address the entire lifecycle of the vehicle and deepen its customer relationships.”

Featured image: After much remote work, Rivian Team Members are pumped about meeting in person, posing for their official team portrait, and mingling with locals at the Salida Adventure Network world debut. Merrell Bergin photo