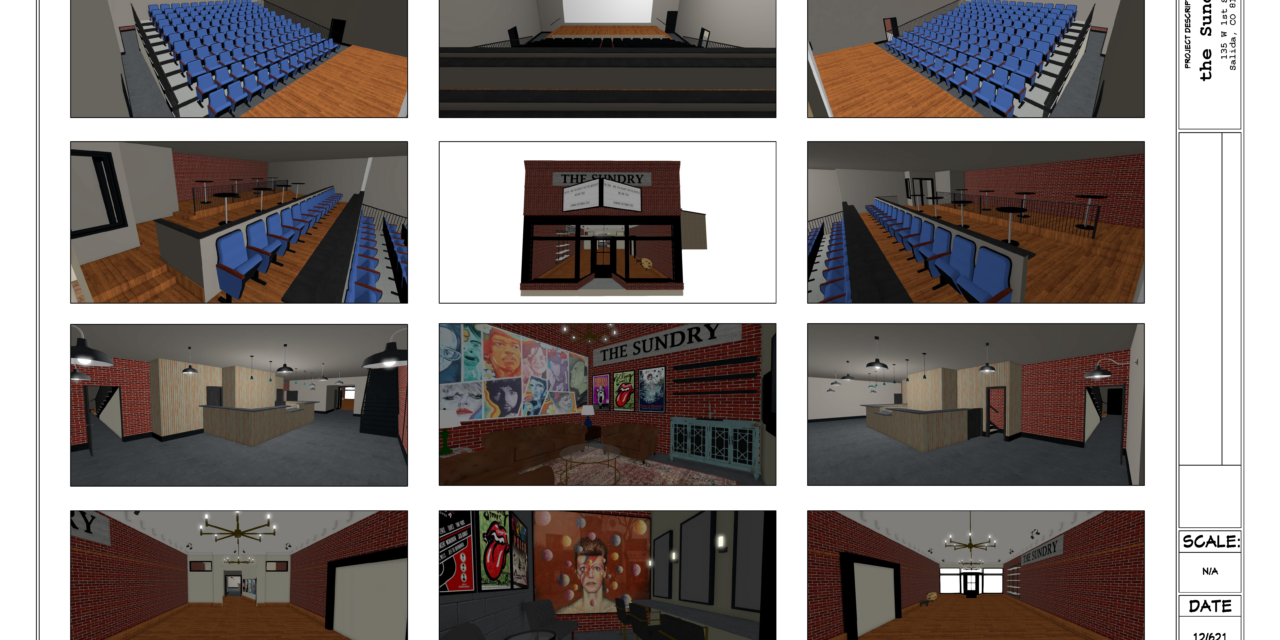 The City of Salida could see a local treasure returned to life next year, with the announcement that the Storyville Cinema, at 135 W. First St. has new owners and may have a new lease on life.

With a new name – now known as both The Sundry and The Sundry Theater – plans for the 6,700 sq. ft. space include a 200-seat theater (with new balcony) and stage space, a green room, retractable seating, and improved audio-visual design and equipment, space for events, some sort of a prep/catering kitchen, and possibly a rooftop gathering space. The new balcony and rooftop space could stretch its space to 10,000 sq. ft. The plans are all contingent upon the availability of grant assistance from the Colorado Community Revitalization Grant Program.

“We want it to be a multi-use community center that could include movies, live music, and performances that could use a stage,” explained Young. He adds that while there are two small theater spaces inside now, they aren’t sure yet if they’ll keep both of them, or turn one of the old theaters into a larger space.

“We called it ‘The Sundry’ a word that defines something made up of miscellaneous items that may not fit perfectly into any one category,” said Nathan Young speaking to Ark Valley Voice this week. “That kind of describes our project. It won’t just be one thing.  It will have multiple offerings. In fact, the theaters are just a little part of it – there are two theaters, even existing, and we are going to expand it. We want to expand that theater space to include a balcony and add a roof-top deck on top – so it could be rented for multiple reasons. That’s the big picture.”

At the moment, the plans are aspirational. The theater space that may look quaint from the street just now has been woefully neglected and the roof has fallen in. “The roof area over the two theaters has failed — not just shingles, the structure of the roof has failed and has to be replaced,’ explains Young. “We can’t work on the inside until we get a roof on.” 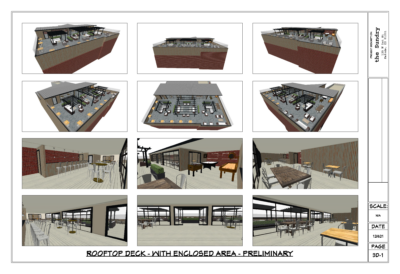 Conceptual plan for The Rooftop deck of The Sundry

Young admits it’s a big undertaking. The project hinges on their application to the State of Colorado Community Revitalization Grant Committee.  Their application passed the initial Pre-Application stage and they have been invited to submit a Full Application in the coming weeks. Assuming the grant comes through, the timing is dependent upon contractors but he says they are hopeful to open in spring, 2023.

“We’ve spoken with both an architect and a contractor and we have a preliminary design,” he says, although most likely construction won’t start until fall, 2022, given grant decisions … we’d like to make clear to the public, that we are very excited to bring back something fun to the community that has been missing for quite a while now. We thought this would be an appropriate and effective way to give back to the City of Salida and Chaffee County in numerous ways.”

The five new owners know they aren’t starting with a pristine space. The original building was built around 1900 as Salida’s first and only movie theater, next to what was then the Salida Opera House.  The previous owner closed the theater around 2014,  at the time planning renovation work. She tore out the theater seats and began to disassemble the two theater areas, then apparently changed her mind and the renovations stopped. “That’s when she decided to sell, I think,” said Young.

While relatively new as permanent residents, the Youngs and Buchans, who all come from Oklahoma, are familiar with the valley. Their extended families have been coming here for years in summer and winter, before the young couples picked up roots and moved to Salida. Jared and Kylie and their three young sons who attend Longfellow Elementary have been here five years, and the Youngs and their two Salida High School students (a son and a daughter) have lived here three years.

With backgrounds in education, health and fitness, interior design, finance and law, and construction, the five appear well-equipped to take on a project that could be seen as both a community asset and a cultural amenity.

He confirms that they have no plans to open any restaurant. “We want to do event rental business. We have the wedding business and private events in mind and the space can be rented as multiple spaces.” He added that if they decide to incorporate a food aspect it would likely be a catering prep kitchen to support their event business, and they do plan to apply for a liquor license.

Young says The Sundry is launching a Facebook page this weekend.

They have prepared a community support survey, which they hope Chaffee residents will complete, so they have real input from residents on what they want to see the space become.  “We are not asking for monetary support from the community, but simply written support through the online survey, and adding comments of support if possible,” said Young. “Of course, written letters of support are also highly valuable to us in this process,” he added.