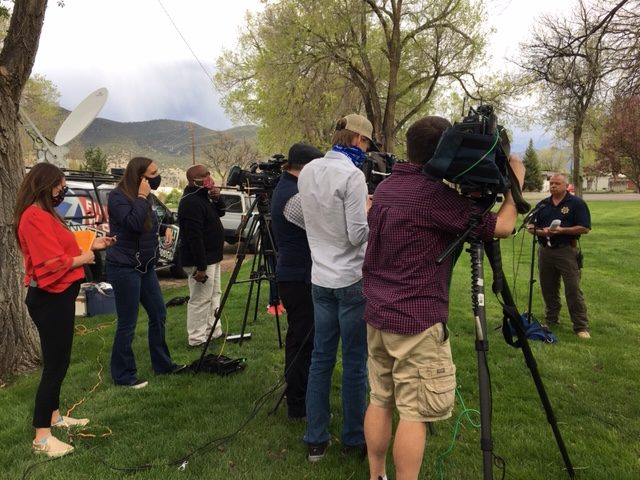 With a scrum of metro Denver news media present and live cameras rolling, Chaffee County Sheriff John Spezze gave a press briefing late Friday afternoon updating what is known about the disappearance of a Maysville woman, who went for a bike ride on Sunday, May 10, and never returned from the ride. The press briefing followed several days of searching and a hefty reward for information leading to locating Maysville resident, 49-year-old Suzanne Morphew.

The search shut down U.S. 50 between Poncha Springs and Monarch Pass for several hours on Friday, after a personal item of the missing woman had been found in the area. Multiple search crews including the Federal Bureau of Investigation (FBI) and the Colorado Bureau of Investigation (CBI) have joined in the search. On Friday, a total of 90 professional searchers executed the tight search grid over around 2.5 miles of terrain. 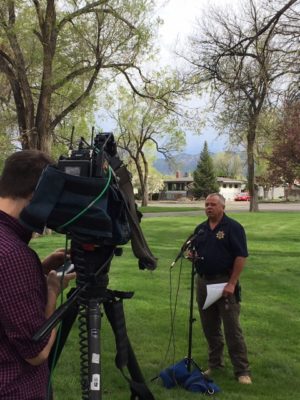 The sheriff declined to say whether any additional personal items had been found as a result of the search. He ruled out any attack by an animal, saying there was no indication that an animal might have attacked Morphew.

Over the past five days, more than 100 search personnel from Chaffee County Search and Rescue, Department of Corrections, and the Chaffee County Combined Tactical Team have scoured the area. The search has deployed numerous drones and eight different tracking and scent dogs from the Department of Corrections and the Search and Rescue Dogs of Colorado.

Members from Colorado Parks and Wildlife and the South Ark Swiftwater Rescue Teams have searched area watersheds and Reach Air Ambulance has been called in to fly search missions as well. Within the past few days, the FBI and CBI have joined the search.

According to the sheriff, Morphew was an active biker. Her husband is cooperating in the search, which remains a missing person investigation. When asked if suicide might be a possibility, he responded saying that in an investigation nothing is ruled. out. But right now, what he and the searchers must do is “just keep going.”

The sheriff said that the tip line established for people to report tips (719-312-7530) has received more than 100 tips. He asked for the community’s help, encouraging anyone who might have been driving on U.S. 50 or CR 225  on Sunday to contact the tip line if they saw anything. He added that the second set of eyes, someone who might have seen something and not realize what they saw, is always helpful.

“This is a small community and this is having a big impact on this community,” said Spezze. “There has been an outpouring of concern.”

Asked whether he thought Morphew was alive, Spezze responded saying, “I certainly hope so. I believe she’s still alive.”