Our junior United States Senator, Cory Gardner (R), remains quiet about his position on the impeachment trial of Donald J. Trump now directly before the Senate. The Denver Post reported  on Jan. 14 that Gardner is not responding to their questions. It’s not really that surprising. He’s up for reelection in 2020, and in an increasingly purple Colorado, he needs the support of moderates to defeat his Democratic opponent.

But, Gardner also needs the support of the Republican base who seem determined to prove Trump’s assertion that he could shoot someone on the streets of Manhattan without losing a single voter. As the Colorado Sun recently noted, “In many ways, [Sen. Gardner is] damned if he does and damned if he doesn’t: Democrats will attack him over his ties to the president regardless and he risks losing Republican votes by splitting from Trump.” 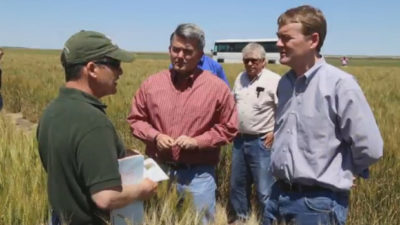 Colorado Senators Cory Gardner and Michael Bennet have worked together on issues such as cybersecurity infrastructure bills, but it appears they may part ways on the impeachment trial that begins today in the U.S. Senate. Photo credit: CBS.

Perhaps they’re correct that Sen. Gardner is stuck between a rock and a hard place. But another angle is that (baring Trump’s removal from office) the Republican base is going to turn out in 2020 to support their charismatic charlatan, and they’re not going to vote for John Hickenlooper or Andrew Romanoff.

Essentially, Sen. Gardner has a “free play” to use a football analogy. He can do the right thing by voting to allow witness testimony and document production in the impeachment trial without sacrificing the base. By taking that approach he could show moderates that he values the Constitution and the rule of law.

This is a “Profiles in Courage” moment for those Senators who haven’t yet telegraphed their willingness to skew the process in favor of the President. There are a few (Sen. Romney, Sen. Collins, Sen. Murkowski, and potentially Sen. Gardner) who can make it into the legislative ‘Hall of Political Courage’ (not a real thing) by voting for a real trial without sacrificing any electoral advantage.

When the authors of Article 1 of the Constitution gave the solemn duty of presidential impeachment trials to the Senate, they weren’t envisioning a show trial engineered to protect an impeached president. They required a real trial where evidence is produced, presided over by the most respected judicial figure in the nation – the Chief Justice of the Supreme Court – decided by an impartial jury of what should be some our best and brightest Americans. Anything less would be a stain on the American system of government, and Sen. Gardner has the opportunity to do something truly great by doing the right thing at a time when so many others can’t be bothered.

I called Sen. Gardner’s office last week and left a polite message encouraging the Senator to support a fair and substantive impeachment trial. Senators and members of Congress listen to those calls. I interned for Sen. Richard Durbin of Illinois (D) in the summer of 2001. One of my jobs each day was to tally calls and provide a summary to more senior staff. They added the numbers to the Senator’s daily briefings and those numbers undoubtedly affected the Senator’s decision-making.

Our voices do still matter, and this is a “Profiles in Courage” moment for us too. How will we respond?

Casey is a lawyer in Chaffee County.