Colorado United States Sen. Cory Gardner visited Chaffee County on Thursday, Aug. 15. Stopping by the Lariat in Buena Vista to talk with community and business leaders before a stroll down East Main Street meeting businesses. His visit highlighted what he said is an emphasis on economic development in this county, as part of the greater effort to support rural Colorado.

“We really look to see what has worked for economic success,” said Gardner who met The Lariat owner Court Johnson, who with his wife Robbie renovated their historic building. “I hear that the music scene here is really growing and to renovate a gorgeous old building downtown is an investment in the local economy.” 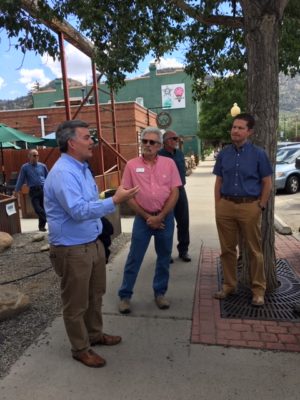 Buena Vista Town Administrator Phillip Puckett reinforced the view that for broadband installation to improve, funds need to get to the private sector, not just into local government.

Mayor Duff Lacy raised the need for government involvement to ensure critical infrastructure such as water right acquisition to compete with Front Range municipalities attempting to buy mountain water rights. He also pointed out that the area is struggling to fill workforce jobs, which in turn is affecting public safety areas such as volunteer firefighters.

“The problem,” said the mayor, “is that people can’t afford to live [in the county] and can’t find housing.”

“We are focusing on a rural economic package – you hear this all over – all areas are struggling with affordable housing for different reasons,” said Gardner. “We are working on increasing opportunity zones in rural areas. The incentives of such zones can drive down the [housing] costs by as much as 30 percent.”

“Where we’ve passed an opportunity zone bill, businesses within the zone have seen eight percent wage growth on average. We know we need more of them in rural areas, so we’re working on more for rural areas, for our public lands – driving infrastructure.

Gardner added that another area of concern for the rural areas he serves is related to healthcare and attracting physicians to serve rural areas. “We just got a rule out of the HHS [House Human Services] committee to get more rural physicians into our rural communities – there is a bias – the biggest indicator of where you are going to practice medicine is where you do your residency. Right now, we have an east and west coast bias, and this bill addresses changing that requirements to get them into rural communities.”

The stroll down Main Street past the shuttered Buena Vista movie theater, causing Gardner to mention that not only had the Senate worked on grant funds for rural theaters to help with the switch to digital equipment, he had had a conversation with the CEO of Disney. “I asked them to drop the three-week run per movie requirement for rural areas. After two weeks, the entire town has seen it,” said Gardner, “It’s a burden on rural theaters that don’t need to be there.”

He was asked about gun legislation and whether, if Majority Leader Mitch McConnell allowed any gun legislation such as universal background checks, a ban on assault weapons or Red Flag laws to come to a vote, would he sign any measures. Gardner sidestepped the question, not answering what if any gun control measures he would support.

“We have to know what [a potential bill] is, see it, read it … we have to protect people in communities and protect people’s rights as well to prevent these tragedies again,” said Gardner. “There are a number of bills we’ve worked on – strengthening school safety, mental health issues, use of artificial intelligence to ID potential attacks/attackers.”

Gardner’s closing message was one of bi-partisanship. “We can all learn from the successes and failures of the past,” said Gardner, who stressed that he is one of about five U.S. Senators that works in a bipartisan manner on the hill. “Housing affordability, broadband, infrastructure – these are all concerns that can lead to bipartisan legislation that’s why I’m so glad to be here to talk about these things.”