In the past week, there have been two instances in which verified service dogs were refused entry to Heart of the Rockies Regional Medical Center surgery prep area. The refusal by a medical staffer to allow the working dogs into what the hospital clients consider to be a public area, has upset two hospital patrons; one of whom was there for treatment, the other accompanying her husband who was having treatment. At issue – the proper implementation of the American’s with Disability Act, (ADA) versus what was presented as hospital policy. 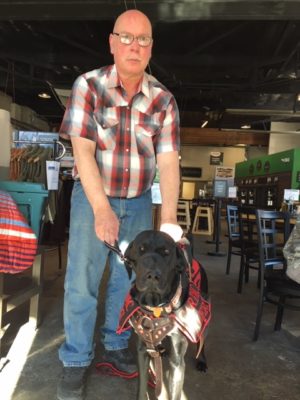 Steve Brandon with his service dog Salut, who is trained as an alert dog for cardiac irregularities, balance and mobility and for epileptic seizures. Photo by Jan Wondra.

“This is not permissible,” said Steve Brandon, who was at HRRMC on Tuesday, Feb. 11 for a pain injection in his back; a procedure he says he has had every three months for the past several months at the same facility. “You can ID the fake service dogs, but you can’t fake real handlers of real service dogs. The most important thing for a service dog team is we are never entitled to anything when we walk in – we are always seeking equality and fair treatment. That’s all.”

Certificates with service animals read “I am a service animal and my right to accompany my handler is protected by federal law.” The ADA is a division of the US Dept. of Justice Civil Rights Division.

Brandon’s dog Salut, is a two-year-old European German short-hair pointer trained in Ontario, Canada. He has accompanied his owner at least three other times in the past year without incident, into the area from which he was ordered be removed last Tuesday. As the confrontation escalated, Brandon and his service dog were allowed to remain. The owner of the other dog ended up taking her service dog home and returning, but this left her without the federally-protected services provided by her service dog.

In response, HRRMC spokesperson Juanita Ward says that the hospital is not ignoring the situation. “We take these allegations very seriously. We have opened an internal investigation and we will follow up with the gentlemen who has issued the formal complaint regarding hospital policy.”

According to the ADA, verified service animals are recognized under Title II and Title III, and are allowed to accompany their human handlers into any area that is accessible to public accommodations – in other words, anywhere the public is allowed to go, with no exceptions. Service animals can’t be in the restricted environment of sterile operating rooms.

The two disputes this past week occurred in the surgery center area where patients and those accompanying them wait prior to surgery and after surgery. It is not a sterile surgery area and those accompanying patients are not required to remove shoes, leave coats behind, or robe in sterile gear. They can can carry in books and briefcases, phones and coffee mugs to occupy themselves while they wait. 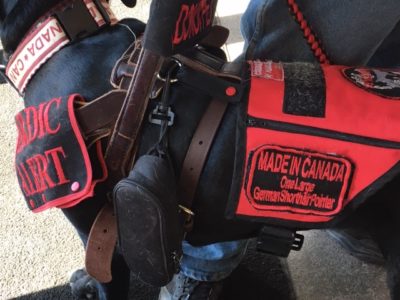 Salut is trained ADA working dog. His daily gear identifies his training as a cardiac alert dog and he is also trained for early alert for epileptic seizures as well as a mobility and balance. Photo by Jan Wondra

Brandon, who has had cardiac surgery, and suffered a stroke while on the operating table in 2018, has had a slow comeback. He depends upon his service dog as the alert for cardiac irregularities, and epileptic seizures that have followed his stroke. He says that the entire incident caught him by surprise.

“Salut was just back there with me three months ago,” said Brandon as he recounted the incident. “Yes of course the surgery rooms are sterile areas, but the waiting area is not. So when someone named Chris came up to me and said ‘No service dogs allowed back here.’ I stood up, and I said ‘yes they are and he’s been here before.”

“Salut is my third service dog so I know what I’m talking about,” said Brandon. “His response was to invite me to the conference room just off the entrance door, and he disappeared.”

Brandon described a lengthy wait process. “When he came back 20 minutes later, he had the hospital policy in his hand and he told me that service dogs aren’t allowed in surgery areas. But according to the ADA, service animals are permitted in exam rooms, and patient prep rooms. The prep area is not a sterile area. Salut has been with me into MRI and CT scan rooms at HRRMC too.”

“He decided he wanted to argue with me, saying state and hospital policy is what matters, instead of state ADA laws. He said that behind those locked doors is not public. I said yes it is — service dogs are allowed any place that is publicly funded that is not a sterile environment. Then he left to talk with someone.”

Brandon says he waited another 20 minutes, “After 20 minutes, I looked down the hall to unit #6, and there was a female nurse sitting there. I said ‘Excuse me Ma’am, could you find the gentleman I was talking with?’ She said yes – then I waited another 20 minutes and he didn’t come back. So I poked my head out again, I asked this other fellow – a nurse – if he could find the fellow and he answered me ‘whatever’. Then he added that they had called a board meeting to discuss this.

“So I closed the door, and waited another 15 minutes,” said Brandon. “Then Chris came back and he said – ‘I made a decision as the OR (operating room) manager to permit Salut in, if your father comes back and sits down with Salut.’ I said this is not acceptable – I also said that per HIPAA rules (federal medical privacy guidelines) he had no right to discuss my case with my father without asking me. I’m in my 50s, my father is in his 80s and he doesn’t live with me. He drove me because my medical conditions prevent me from driving.”

“I asked him if he made this decision and not the hospital and he said he had,” added Brandon. “I said well you’re in hospital gear, so they are responsible for any decision made on behalf of the hospital. I quoted the ADA law regarding service dogs. Salut is highly trained, he’s been to the surgery center prep area three times with me in the past year, and he doesn’t need someone with him. If I tell him to stay, he doesn’t move. No one else is his handler.”

Brandon did say that the hospital representative did point out that HRRMC has to protect the interests of other patrons who come back into the surgery prep area. He added that he understood the hospital’s responsibility, but that his service dog Salut is always with him, has come into the emergency room and into ambulance transports with him, which ADA laws permit.

“We’ll be reviewing our policies and updating them accordingly,” said Ward. “I know they finally allowed the service dog to stay and it’s clear we need some internal education. We’ve never had to deal with this before. I know that the ADA encourages both education and mediation to move past disputes. He says he wants to sit down with us and educate us and I look forward to that.” 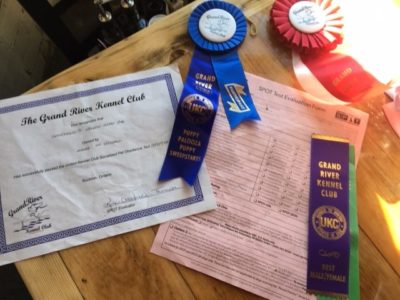 The ADA definition of service animals:

Service animals are defined as dogs that are individually trained to do work or perform tasks for people with disabilities.

Service animals are working animals, not pets. Per definition, they are not comfort or emotional support animals — they perform tasks related to verified disabilities.

Over the past forty years, the implementation of ADA laws have resulted in more accessibility for all people with disabilities. These include wheelchair access doorways and bathrooms, sidewalks without curbs that can accommodate wheelchair movement across roads, homes with ramps, and signage for the blind and deaf. As physical limitations have been removed, the training of highly-intelligent service animals has advanced, relying upon animal senses far beyond human ability to allow those with disabilities access to previously inaccessible-activitites.

By federal law, staff may ask only two questions regarding a service animal. They are: is the dog a service animal required because of a disability, and what work or task has the dog been trained to perform. Staff may not ask about the person’s disability, require medical documentation for the dog, or ask the dog to perform the task.

Federal law specifies that a person with a disability cannot be asked to remove his service animal from the premises unless the dog is out of control and the handler doesn’t have control of it, or the dog is not housebroken. Neither of those circumstances were exhibited in the two incidents last week.

“You give a command to the dog and the dog obeys,” said Brandon. “Only you are responsible for your dog, there is no other handler.”

Both people involved in the incidents at HRRMC have conditions that are sometimes referred to as ‘invisible disabilities’, not always obvious and visible to the outside world, but disabilities nonetheless.