The Greater Arkansas River Nature Association (GARNA) and Antero Outdoors are partnering for the seventh annual virtual Wild and Scenic Film Festival at 7:00 p.m. on December 2.

The Wild and Scenic Film Festival is an internationally renowned tour of the latest, cutting-edge environmental and adventure films from around the world. The two-hour event benefits GARNA’s environmental education, on-the-ground stewardship, and sustainability programming throughout the year in the Upper Arkansas River Valley.

Tickets provide access to the live, virtual event and access to films through December 8. There will be a live community chat during the opening night on December 2. Each ticket purchased will enter attendees into a drawing for awesome prizes including two canvas prints  featuring the Collegiate Peaks of the Sawatch Mountain Range painted by James Niehues, a Peak Designs sling bag, and other gifts. 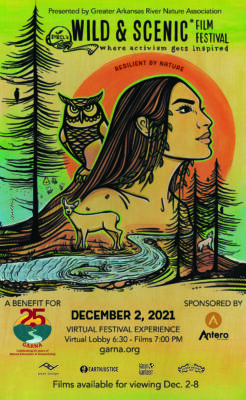 The Wild and Scenic Film Festival leaves audiences feeling inspired for adventure and motivated to go out and make a difference in their communities and the world. In line with GARNA’s work to expand wildlife education in the face of declining local wildlife populations, the film festival presents an incredible lineup of films highlighting work being done to conserve the landscapes and critters that make our planet special, including a feature film titled, The Nature Makers.

In a world increasingly dominated by humans, three teams of determined conservationists go to extraordinary lengths to save three threatened species in the American heartland. Stunningly photographed in the Grand Canyon and on the American prairie, The Nature Makers follows biologists who’ve deployed helicopters, giant bulldozers, and a host of human tools to defend nature. More on each film can be found here.

Online tickets are available at garna.org. Ticket prices start at a deeply discounted rate of $10 for GARNA members as a “Thank You” for the support this year or $20 for non-members. Those who join GARNA prior to purchasing tickets can still get a discounted ticket. Buy tickets here.