Show You Care: No Sticker bombing on Salida Structures 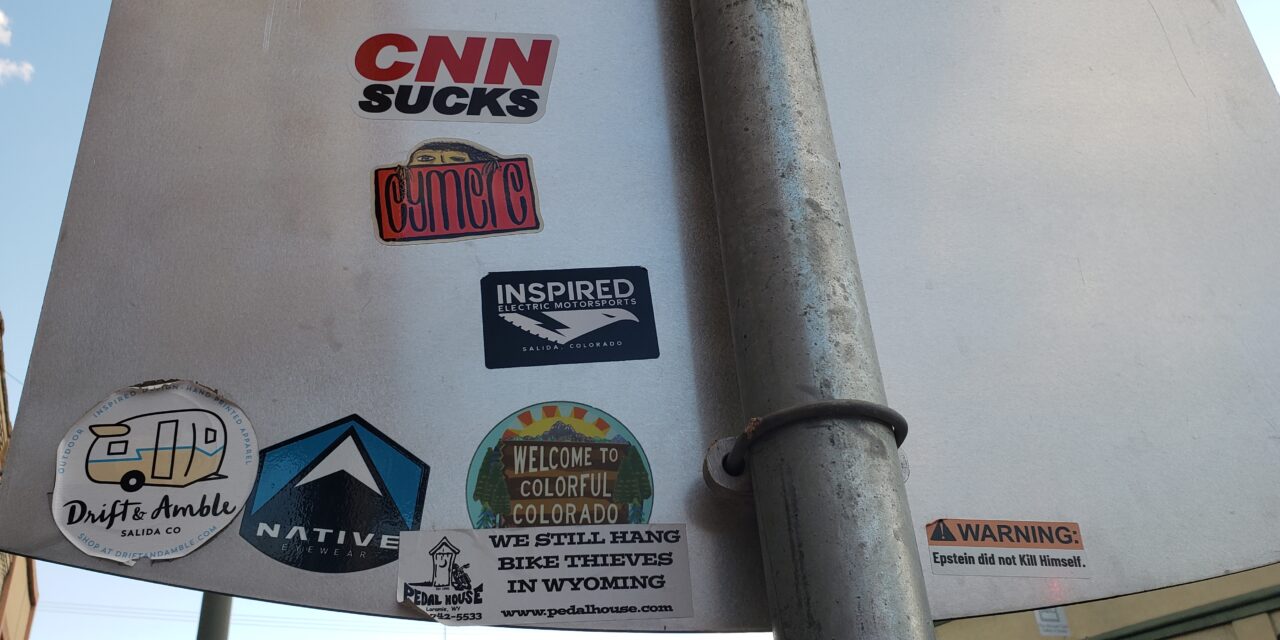 In earlier days, carving initials on a tree in the forest meant: “I was here“.

These days, marking one’s presence has morphed into a simpler custom – placing adhesive-backed advertising stickers on every square inch of city or utility-owned property in downtown Salida. It’s almost as permanent and as much of an eyesore. 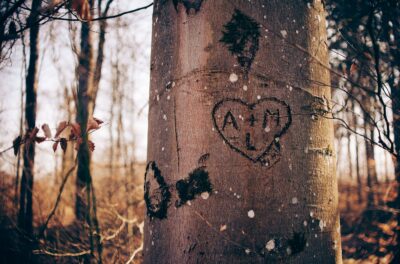 Some might think that advertising stickers or political slogans first say: “Pay attention to me – I was here in Salida” (or “I was at ‘Florence Brewing'” on my last outing).

While some call stickers “art”, it’s also known as “sticker bombing”, “sticker slapping”, “slap tagging”, and “sticker tagging”, a subset of graffiti that officially dates back to 1989 in the U.S.

Salida seems to be experiencing a real spike in the number of advertising stickers multiplying on traffic/parking signs, waste bins, traffic lights, and utility poles. Some are way above normal heights, up to 8-10′ off the ground, with more now than ever before.

Some months ago, one new business owner was seen stickering every pole in sight (he is no longer in business).  It would seem sensible that when businesses hand them out to their customers, that they encourage them to do the right thing, “sticker responsibly” on their own private property or on others where permission has been given. After all, a business’s reputation is also tarnished alongside the person who is affixing the stickers.

Stickers on the back side of the Salida wayfaring sign on lower F Street. Also seen on a Stop sign in the background. AVV staff photo

In general, putting up stickers in public places is illegal and breaks the law. In Salida, Municipal Code Section 10-3-60 addresses defacing “street signs”.

They responded that it is unfortunately typical in mountain towns. According to the SPD, they frankly, have more important things to do than watch for stickering, but they might make a contact if they see someone actively stickering.

Regardless, those who would sticker-bomb should be aware there are security cameras around city buildings and possibly in the area of 1st and F Streets. The Chaffee County Visitors Bureau also has some on the Salida Riverwalk, operating as live webcams.

So the next time someone hands you a sticker, consider sticking it on your own coffee mug, iPad, reusable water bottle, bike, or other personal property. Consider politely telling your friends and visitors when you see them getting ready to sticker a traffic sign, city waste bin, traffic light, or utility poles, not to do so. 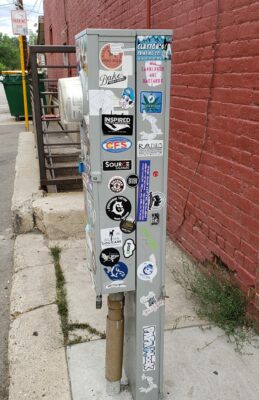 Stickers are Hard to Remove

After a few days, the heavy-duty adhesive on most stickers makes it very hard to peel them off, without using sharp objects that further damage property that you, as a taxpayer are paying for.  Remember, “Smile, you may be on a candid camera…”

We’re proud of our historic district and City of Salida employees work hard, year-round, keeping it clean, litter-free and eye-appealing.

Someday, maybe the Salida Arts and Culture Department or Public Art Commission will find a place to establish a public “art wall” where people can draw and sticker all they want.

In the meantime, show you care as much about city property as you care for your own.