“Something” Happened on July 4 in Buena Vista. What Was It? 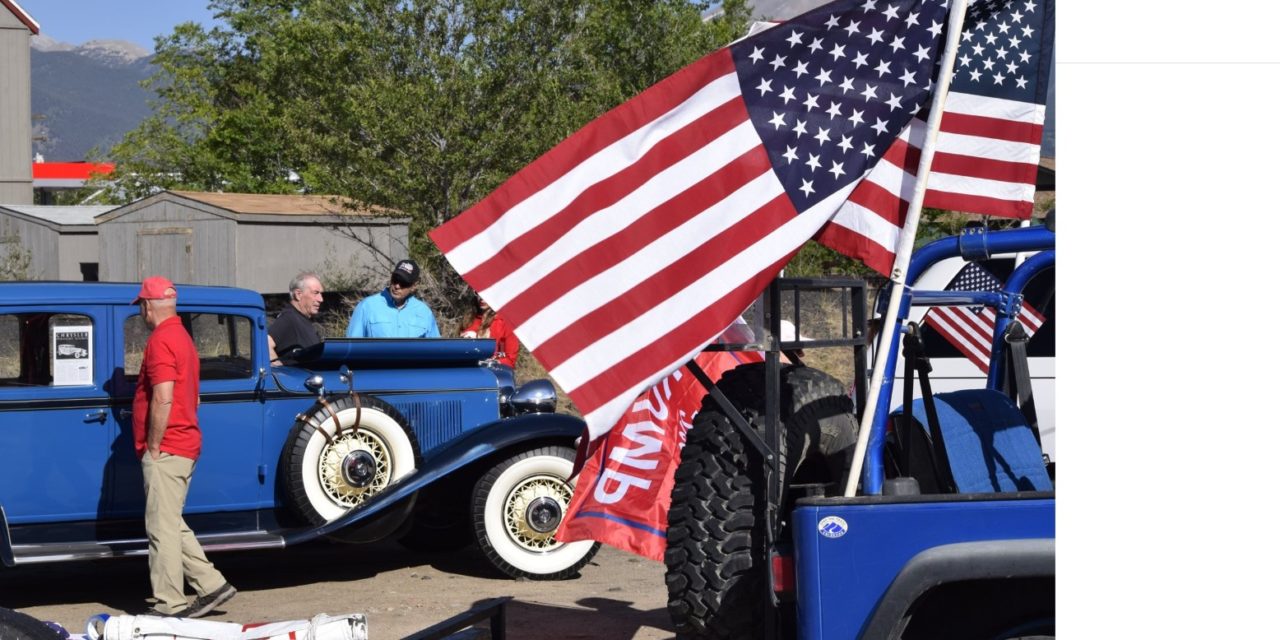 The question of what exactly occurred in Buena Vista this past July 4 is still open to interpretation, one month on. The answer to that question appears to lie with the beholder. Who you are and what you believe appear to have determined what you thought and how you felt about the events that transpired.

While some celebrated, others felt threatened (and some say they received death threats). Some referred to it as an innocent expression of personal beliefs. Others objected to the intrusion into their quiet neighborhoods. Some pointed out that with no permit and no approval from public health, in their view the “something” should never have been allowed to happen. Several objected to the politicization of what in their view should be purely a national holiday. 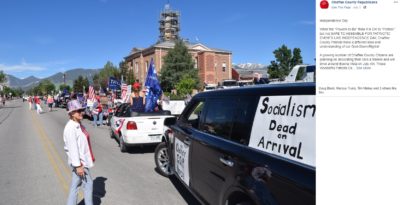 The Chaffee GOP Facebook page featured this photo of parade lineup on July 5, but the photo is clearly from the town’s 2019 4th of July event: note the renovation in progress on the historic cupola of the Buena Vista Heritage Museum courthouse building, which was restored last summer. 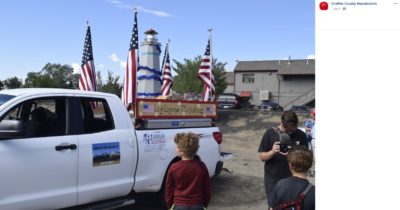 Following the “something,” the candidates riding those “floats” gathered at the BV Event Center (BVEC) stage behind the Roastery for “another thing” – a candidate forum, sans the facemasks required by the county’s public health order. At least two candidates were packing guns and ammunition.

The “something” and the “other thing” elicited reactions ranging from pride and enthusiasm by “something” organizers and enthusiasts, to incredulity, confusion, fear, and anger from independent onlookers. Some who commented about the “something” on social media say they were threatened – one with a death threat — and only agreed to talk to Ark Valley Voice on condition of anonymity.

“How come this is a secret Republican Trump rally?” wrote another on the social media site. He added that it “looked like they conned the town into letting them have a Trump rally. We were excluded. Then they threatened me and my wife and then the site administrator shut it down.”

Homeowners such as Nancy and Scott Anderson said “something” descended on their quiet street as “some kind of unannounced parade” … adding that it “was immediately evident that a political rally poorly disguised as a parade was injecting itself into our quiet morning.”

The Andersons observed not just a raucous caravan – but the “something” was joined at the end by official public safety vehicles; a Chaffee County Sheriff’s squad car and two Buena Vista police cars – all with full lights flashing and sirens blaring “which appeared to be part of the parade” – giving rise to an impression that the event was both county and town-sanctioned.

BV says the “something” wasn’t town-sanctioned 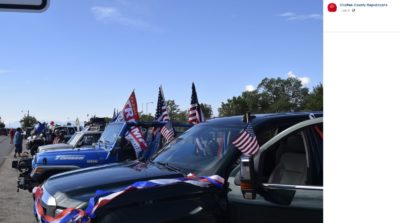 Asked what this “something” was – the Town of Buena Vista issued the following statement:

The traditional July 4th celebration has been organized in the years past by the BV Chamber of Commerce. In June all events and activities traditionally sponsored by the Chamber for the 4th of July were canceled.

In response to the cancellation, a citizen [Kathi Perry] spoke during public comment at the June 8 Board of Trustees meeting requesting the Town of Buena Vista’s “blessing” for a number of citizens to have their own ‘parade’.

Since the ‘event’ did not meet the criteria of a Buena Vista special event permit, there was no permit issued. Additionally, there were no street closures, no barricades, no liquor on Town property, no amplified noise, no vendors, and was forecast at less than 200 participants and was not organized by the BV Chamber. The only recommendation to the organizer was to stay in good communication with the BVPD with regards to their times, potential routes, and the overall pulse of the activity.

BVPD was present only with regards to their normal activities and did, in fact, use their lights during a normal traffic stop. As long as the participants were observing traffic laws there was no reason to intervene.

This gathering was not ‘blessed’ by Town nor was it organized or regulated by Town. None of the signs, flags, or opinions were sanctioned by Town. It was simply a group of citizens wishing to exercise their right to free speech and as such were not prevented from that expression.

Asked whether “something” organizers had consulted Chaffee County Public Health at what was clearly an event involving a significant number of people, Chaffee County Director of Public Health Andrea Carlstrom said “I was not consulted with that set of events and most of those requests are going through me. If someone called and spoke with my team, I’d know.”

“We had both outdoor and indoor aspects of the ‘Safer at Home’ rules in place,” she added. “I’d say it’s sneaky if they decided to go through us rather than their board, but we’re not screening them. We review and give them guidance, but we wouldn’t endorse or overstep what our role is.”

Another pointed out that on the same day, Turner Farm, a property of the Buena Vista Heritage Museum, was used for a Republican political rally. Earlier this year due to the pandemic and public health event size guidelines, the Board of the Heritage Museum voted to cancel all events for the rest of the year in all its historic properties, including already contracted weddings. So the use appears to go against stated policy.

Other people attending the BVEC candidate forum commented they felt unsafe among so many candidates not wearing facemasks. Some were further incensed by candidates making political statements with weapons and ammunition on the stage.

Clearly, “something” was – and is – a big deal. As to what to call it, the Chaffee County Republican Party social media site officially referred to the “something” as a parade, which would seem to require some official oversight.

The national election is less than 90 days away.

Editor’s note: it was incorrectly reported in this story, based on two sources, that the event at the Turner Farm was a  Republican political event.

Buena Vista Heritage President Vic Kuklin provided a clarifying statement: “The BVH board voted at the time of the shut down to cancel all planned events. That was not a cancellation for the next 100 years. It was a vote to comply with the rules. Once the County Health Department loosened the rules, our events committee met to decide how to move forward. That complied with our bylaws. No board vote was needed. We reopened our properties with strict COVID rules compliance. RailFest was done via Zoom with a small outdoor tour. A small, outdoor wedding was scheduled. The July 4th concert was scheduled as a small fundraiser. We have now scheduled 8 more. I am at the Turner Farm concert right now and you are welcome to come join us to see masks and social distancing. If anyone is wearing a political badge, I will ask them to remove it or leave.”