Just In: The Planning Commission and Health Department are holding a special joint meeting and special hearing April 1, in which they plan to hear a proposal for a bar and grill on U.S. Highway 285. “It’s likely to be unpleasant as all get-out,” a staffer said, grimacing.

The applicant, who goes by Bob Smith, told the AVV he’s been trying to negotiate with the groups on the proposal for several years, and that “I’ve almost gotten to my breaking point. I can’t even get someone to call me back.” When asked why he thought that might be so, he admitted that “it’s not always easy to get me on the phone if I’m not, um, here.” 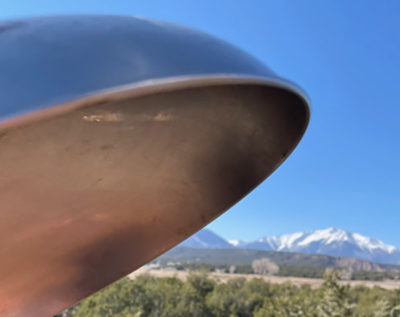 Bob Smith plans to address the Planning Commission and Health Department April 1. Part of his bar and grill proposal is a parking space for his large metallic vehicle, which is seen here looming in front of the Sawatch Range.

Smith then confided to the AVV that he spends at least part of his winters about a light-year past the Helix Nebula, and he suspects that’s the problem. “But honestly, we use wormholes and all that anti-gravitational tech stuff to get here in a jiffy – in less time than it takes for the average governmental Zoom meeting,” he said. “So it’s not like we can’t get here and sit down and talk. And finally, that’s what we’re going to do.” Smith said the groups were planning to meet in person and that he has been advised to mask up all five of his heads.

The staffer who had grimaced previously in the story said that Smith has one idea why he may not be well received, but actually, the situation has more to do with the fare proposed for the bar and grill.

“Look, staff has gone over this thing with the Health Department a zillion times,” he said, “and Smith isn’t hearing us. He wants to serve up some kind of primordial ooze and charge a boatload for it. And that would be okay if they had something like locally crafted cocktails or a decent IPA and maybe a panini menu with local goat cheese or something, but no, it’s just this… this… I don’t know what it is. Chaffee County has changed a lot recently, but I can’t think of anyone – old-timers or new arrivals – who’s gonna wanna have anything to do with that. I don’t even know if it’s digestible.”

There’s also the matter of Smith promising to return five county residents and several tourists from Oconomowoc, Wisconsin, who were last seen getting sucked up into the mother ship that he occasionally uses. “If they aren’t returned in good condition April 1, the deal’s completely off,” the staffer said.

The proposal calls for a bar/dining area that seats 150 and features a tasting room and a modified parking space for Smith’s smaller craft, which has been described by the increasingly agitated staffer as looking “like a stupid old wok lid.”

Note to Readers: Keep in mind, it is April 1.