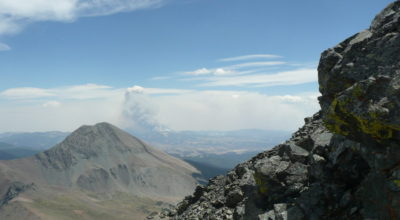 Smoke from the Spring Creek Fire rises beyond 14,042-foot Mount Lindsey as seen Saturday, June 30, from near the top of 14,345-foot Blanca Peak. The fire is now the third largest in Colorado history (photo by Joe Jordan).

The Spring Creek fire burning in Costilla and Huerfano counties in south-central Colorado, 17 miles north of Walsenburg, is just one of six large fires burning in Colorado. As of 4:10 p.m. Tuesday, July 3, it had grown to 94,125 acres, and authorities reported flames reaching as high as 300 feet, prompting evacuations and highway closures. Since Tuesday, the fire has devoured another 30,000 acres. It is considered 5 percent contained.

About 715 firefighters are battling the blaze near Fort Garland and La Veta, according to an update from Rocky Mountain Incident Management Team Black. Some 104 homes have already been destroyed.

The fire danger is extreme. Much of the state of Colorado is under Stage 2 fire restrictions that preclude fireworks, open burning, and even carrying or using firearms on public land.

At this point, the Spring Creek fire has become the third-largest wildfire in recorded Colorado history. The two largest fires were the Hayman fire (138,114 acres) in 2002 and the combined West Fork, Windy Pass and Papoose fires (109,632 acres) in 2013.

Weather updates for the south-central mountains continue to report extremely low humidity and gusty winds out of the west.

In South Park, the Weston Pass fire, which authorities believe was started by lightening, has grown to 10,727 acres, and firefighting has focused on protecting the Campground of the Rockies, a private recreational vehicle campground off U.S. Highway 285 south of Fairplay. More than 400 firefighters are fighting the fire, which is also 5 percent contained.