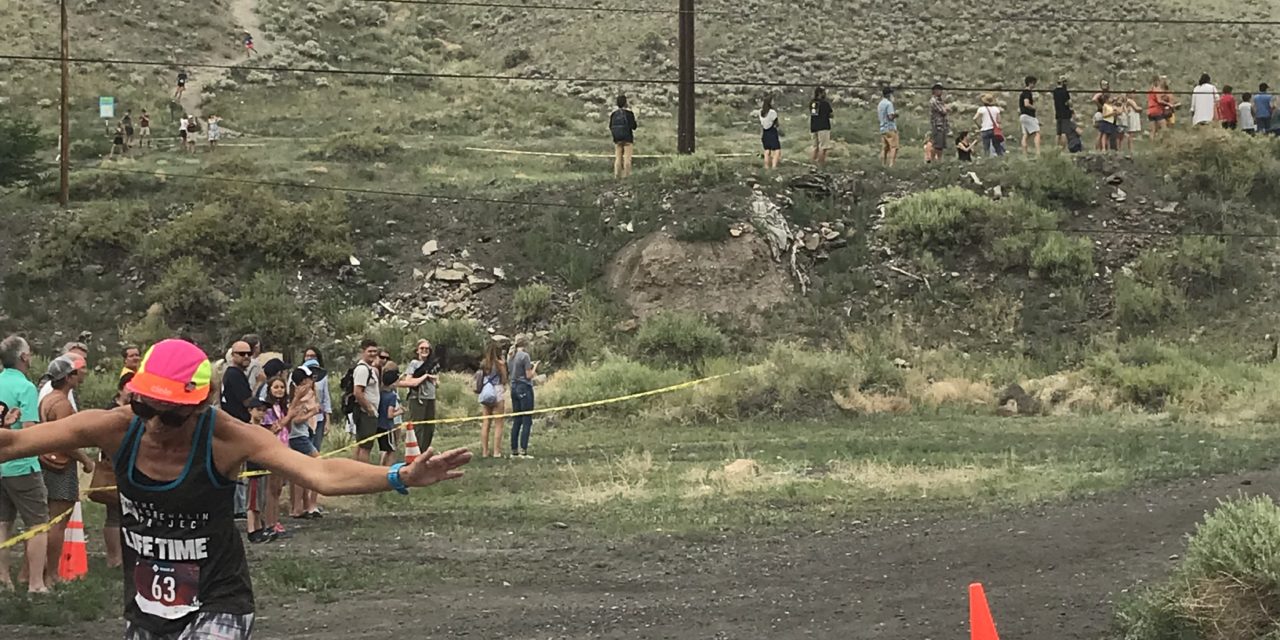 The Tenderfoot Hill Climb, a traditional part of the annual FIBArk festival, had a new starting and finishing point this year due to construction near the base of the hill, and the closure of a two-block portion of F Street with concrete barriers making it pedestrian-only to create more open-air shopping and dining space.

The overall feel of the race remained largely unchanged. The race course is simple – get to the top of Tenderfoot Hill and back down as fast as possible, by any route necessary.  From the bottom, all routes resemble a 45 degree staircase consisting of sharp objects – rocks, grasses, cactuses, etc. Many competitors climbed the dry gulches that braid up toward the “S”. The gulches are so steep they would appear more like a waterfall than a stream when filled with water. The climb was nearly 500 feet in elevation this year and the first person to climb all 500 feet made it in 5 minutes and 58 seconds.

Judging by the amount of leopard print, jean shorts, pink tutus, onesies, giggling, cowbells, and shouting, none of the 133 finishers seemed very daunted by the challenge.

The competitors took a variety of routes. Most of them plodding and scrambling up the Loyal Duke trail, before finding the ridge that led to the top. The overall winner, Garrett Lundberg, took a different tack. Lundberg sprinted West on Frontside trail, went right up the middle of the drainage that parallels F Street all the way to the S and the top. Second place finisher, Morgan Elliott, took a different route and nearly caught Lundberg on the way down – finishing 1 second behind him. Echoing the overall feel of the race – their faces were more masks of joy than intensity or pain as they crossed the finish. This is Lundberg’s third win, putting him five wins behind FIBArk Hall of Famer and eight-time champion, Roy “King of the Hill” Hicks. 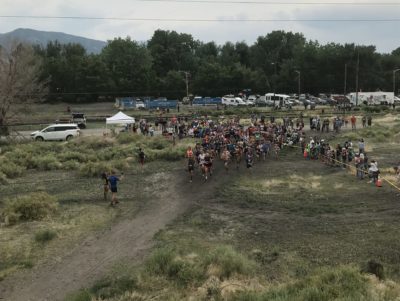 The crowd was raucous, energetic, and loud. They watched intently as the racers first painstakingly climbed to the top then as tiny clouds of dust were raised while they galloped down.

Female overall winner and third Jay, Becca said, “We all had to figure out the course ahead of time. I kept looking for the tower and the house. That was my guidepost. And just not stopping. Going up, I said, ‘Don’t stop. Don’t stop’. Going down I just kind of slid. I skied down.” She skied down and then did a cartwheel over the finish line.

The Tenderfoot Hill Climb and Raft Rodeo were the first events in the 73rd annual FIBArk. The Salida Whitewater Park will host river events beginning at 9:00 AM on Friday, June 18.

See the complete results from the Tenderfoot Hill Climb.