The Center of Excellence for Advanced Technology Aerial Firefighting (CoE) has won the “Best of What’s New” award from Popular Science for its use of the Team Awareness Kit (TAK) in disaster response during this year’s Grizzly Creek Fire.

TAK is a geospatial mapping engine, originally developed for the Android operating system, that facilitates tactical situational awareness, navigation, and data sharing. TAK is under continuous development by the TAK Product Center, a coalition of U.S. Department of Defense programs and other federal agencies. 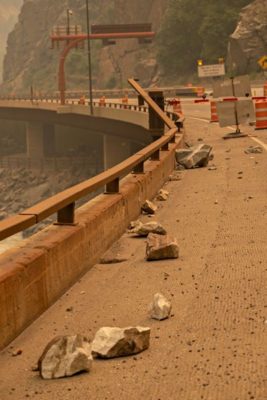 The CoE deployed the TAK app with 28 fire crews on the Grizzly Creek Fire for 13 continuous days as part of its pilot implementation. “Somebody always has to be first, right?” says Director of the Center of Excellence Ben Miller. “Nobody says, ‘Yes I want that for my team,’ unless somebody else has tried it or there’s somebody that says ‘I’ll try that first.’ So that’s really our mission, is to try things first in the Center of Excellence, being the research and development section of the state fire agency.”

Earlier this year, the U.S. Forest Service awarded a grant to the CoE to develop the kit’s capability for wildland fires and to conduct a pilot deployment of the technology on wildland fires. Firefighters used the app to navigate to new fire starts, coordinate fireline digging, and maintain the safety of firefighters during night operations. The CoE first fielded TAK with Colorado firefighters in 2018 and with Search and Rescue teams in 2019.

According to the CoE project report, 154,304 location reports were logged by participating firefighters during the TAK’s 13-day deployment on the Grizzly Creek Fire, and firefighters’ positions were updated every 129 seconds on average. Participating wildland firefighters also received regular updates of incident maps and information on their phones through the TAK app, including fire perimeters and infrared video clips of the fire.

Miller, referenced Chief Mike Morgan, saying that he feels systems like TAK are a new sort of PPE (personal protective equipment). “Having the ability to know where their folks are and communicate spatially significant information with them is a safety thing,” Miller explained. “I think that’s the future of this and I think that’s the future of, you know, resource tracking not just across wildland fire but across public safety.”

For Miller, being recognized alongside projects like the SpaceX Dragon in what he calls the “Academy Award for nerds” is also about a sense of accomplishment.

“As a leader, love to see these recognition opportunities happen for my team,” he explains. “I tell them all the time, ‘You guys are doing great work. Keep at it.’ But it’s awesome for other folks to say, ‘Wow, that’s cool.’”

Going forward, Miller is hopeful about TAK’s potential as an everyday public safety tool. “We always think about, when we think of public safety, new technologies, and that’s appropriate because they really only find their usefulness on big events like hurricanes,” he says. “But I think it’ll help every single time somebody calls 911. I think it’s a day-to-day, everyday staple of better public safety.”