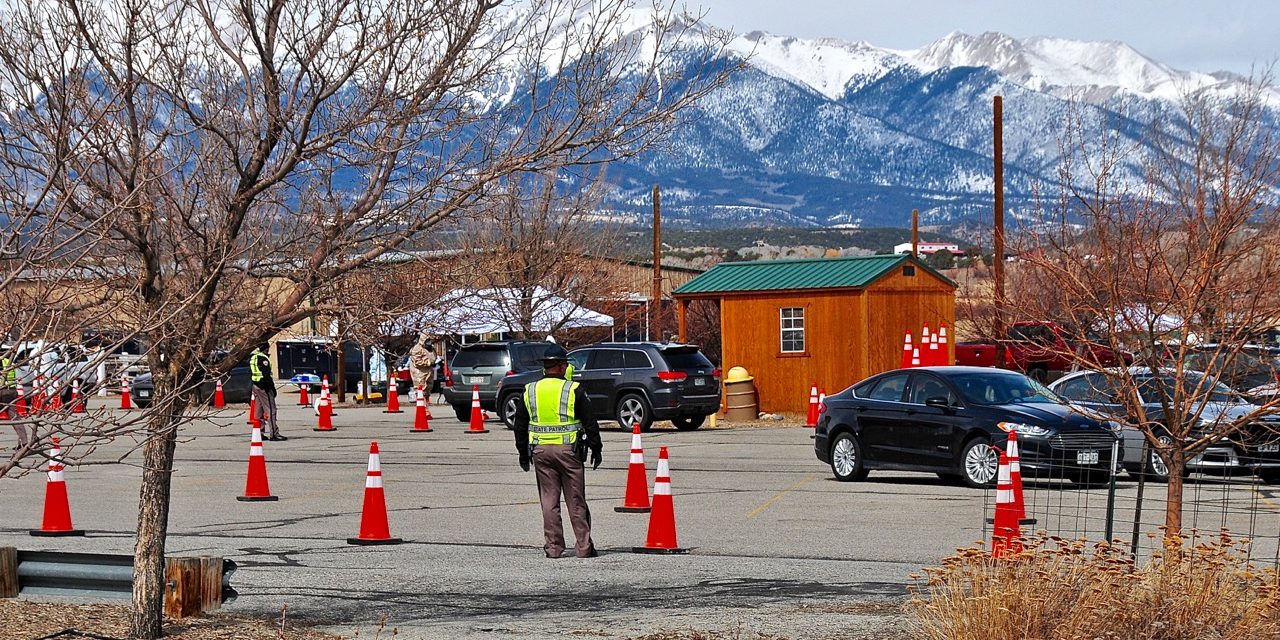 The first large-scale testing of residents for the COVID-19 virus was conducted Saturday March 21 at the Chaffee County Fairgrounds. The drive-through tests, organized by the Colorado Department of Public Health and Environment, with the assistance of the National Guard and State Patrol, ended early when only about 20 cars showed up possessing a doctor’s written orders for testing.

“I guess that’s a good sign, if you interpret it as only that many people could get a doctor’s order for a test,” said Chaffee County Commissioner Keith Baker.

The testing locally came in the wake of the first three confirmed cases of COVID-19 among residents, including one resident of Columbine Manor in Salida. 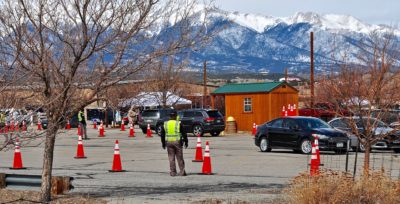 As reported earlier, the three people in the county who had already tested positive for the virus included a 46-year-old man who had traveled out of state; a 69-year-old man and an 84-year-old man, both of whom were listed as ‘under investigation,’ presumably meaning their travels and people with whom they have had recent contact.

In addition, a physician at Heart of the Rockies Regional Medical Center (HRRMC) in Salida who had traveled outside the country was tested for the virus. Officials said the test came back negative.

The Saturday tests were to be limited to 100 people driving into a secured area and remaining in their vehicle while National Guard and health personnel conducted the tests.

Chaffee County Emergency Manager Richard Atkins was on hand for the start of the testing, and was complimentary on how it was conducted.

Perhaps because of the relatively short notice of the testing operation and the requirement to have a doctor’s letter, not all of the 100 tests kits, supplied by the state health department were used. Residents who were tested were required to have a doctor’s order for the test, be symptomatic and fit other criteria. Residents were told to expect long wait times and urged to bring water and that no bathrooms would be available during the test time.

At the start of the process, which was to run from noon until 4 p.m., about 15 to 20 cars were lined up in coned traffic lanes watched over by State Patrol members while health workers in hazmat-style suits worked with vehicle passengers for the testing, presumably involving swabbing facial cavities and blood draws.

Officials on scene told Ark Valley Voice that ‘no media’ were to be allowed on the site while the testing was being conducted. Photos of the operation were taken from outside the perimeter fence.

Local officials have been tight-lipped about concerns including the number of virus tests available locally, the number of respirators available in the county and protective equipment supplies for health care workers.

The issue has come to the forefront nationally and internationally, as health workers face uncertain supply lines and the virus spread grows rapidly.

There was no immediate report from state health officials on their assessment of how the testing procedures went, or how long it might take before the test results were announced, but Atkins said he anticipated it would be no longer than the usual two to three working days.