As the current session of the Colorado General Assembly rushes toward a conclusion, manners are wearing thin, causing many to ask ‘Whatever happened to civil behavior?’ This is a civil society, and our democracy is based on debate, not gunfights at the OK Corral.  There is debate, then we vote, and the majority wins. At least, that’s the way it is supposed to happen.

But the brew-hahas that have erupted during the current general session, might not be acceptable in our children’s classrooms. This year the rancorous tone, or lack of generally civil behavior, is growing. While it appears to be occurring on both sides of the aisle, the state’s Republicans, who are in the minority in both houses, appear to be edging things closer to actual fistfights. 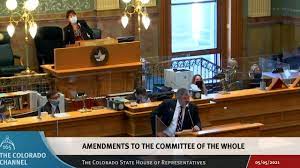 Earlier this year District 60 Representative Ron Hanks caused a ruckus on the floor of the General Assembly even before he was sworn in. Several Republicans have been castigated for insensitive remarks, including racially inappropriate remarks, throughout the 2021 session.

“It was a term of endearment,” said Holtorf, a claim the Democrats on the other side of the chamber call preposterous.

Holtorf’s remark led Rep. Leslie Herod, a Denver Democrat, to tell Holtorf to calm down, but he used profanity in making the request. Then Rep. Tom Sullivan, a Centennial Democrat who lost his son in the Aurora theater shootings, jumped to his feet and began to yell at Holtorf — aggressively, according to Holtorf.

So last Thursday, given the atmosphere, Garnett got up and spoke at length about the lack of decorum and respect. He pleaded with members to honor the institution in which they work. How much good it did isn’t immediately clear.

Holtorf says that members of the majority party heckle him when he’s speaking at the podium. Some Republicans say that Democrats, who hold the majority, cut them off from asking questions in committee meetings. Democrats claim that Republicans bring up things not based on facts.

Holtorf offered a tepid apology last Wednesday, after talking with Garnett and others, saying  “I apologize to anyone I’ve offended — anybody in any way.”

Then on Thursday, he repeated it adding that the stature of the Colorado House “demands the highest decorum … . We can all do better in understanding one anothers’ perspectives.”

Whether perspective and tolerance will win out during the remainder of the General Assembly session remains to be seen. Democrats hold majorities in both the Colorado House and Senate and bills are moving along at a rapid pace, after the loss of much of the 2020 session due to COVID-19.

It is a fact that the mix of Colorado representatives and state senators is the most diverse in state history. Nationally tensions are high, as a majority of Republicans are holding onto the “Big Lie’ that Trump somehow won the 2020 election, and statehouse after statehouse are passing more restrictive voting rights acts. (a restrictive voting act introduced by Republicans here in Colorado died in committee.)

“We are public servants. For a few short years, we’ve been given the sacred trust of our voters,” aid Garnett. “Using the privileges of our office to act recklessly or aggressively, shout out of turn, yell at one another or at another member inside the chamber, or speak in a way that is anything but respectful, mindful and precise, is a violation of that sacred trust.”