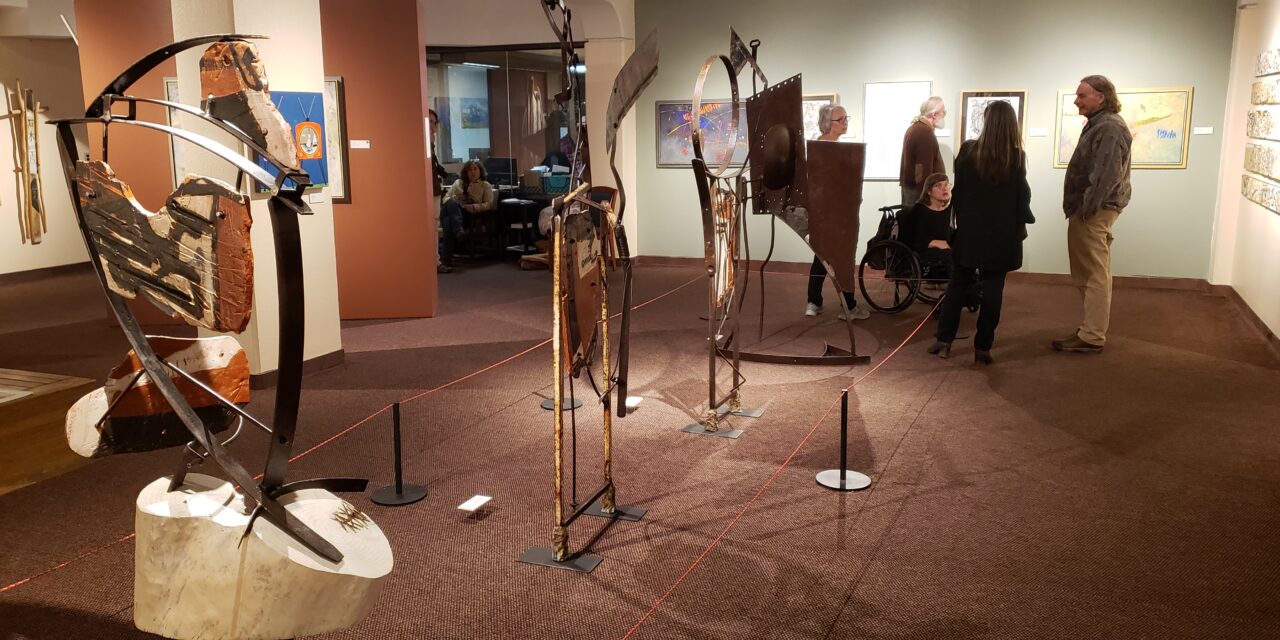 Three generations of the Salida-based, Strawn family of fine artists, their friends and visitors gathered on Dec. 2 for a group show opening at the Sangre de Cristo Arts Center in Pueblo. The opening reception was also family reunion, with members of the extended family arriving from Salida, Colorado Springs and Lyons, Colorado and as far away as Michigan. 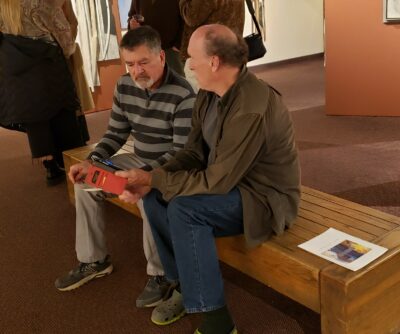 Former Salida resident, Michael Boyd, well-known fine art jewelry maker and teacher (now based in Pueblo) was also on hand to visit with his long time friends, the Strawn’s.

The second-floor Frances King Gallery at the Sangre de Cristo Arts Center is full of a wide array of Strawn family works. The exhibition is in the White Galleries Building and open from 10:00 a.m. to 4:00 p.m. Tuesday through Saturday, now through March 4, 2023. The Center is located at 210 N. Santa Fe Ave. in Pueblo, just off I-25 at City Center Drive.

What is striking about the thoughtfully curated show is how warm and inviting it is; an atmosphere where it is hard to pick a single favorite piece. While each of the family members uses different media and techniques, there is a definite connection between them, uniquely personal, yet complementary.

While Salida locals have been fortunate to see some Strawn works in occasional shows and on public display (SteamPlant Sculpture Garden and Grounds, Heart of the Rockies Regional Medical Center, and now on F Street), much of it is dispersed in private collections. An invitation to visit one of the Strawn studio workshops also reveals a vast body of decades of work.

Melvin Strawn’s lengthy academic career spanned five institutions, with a capstone there as Art Director Emeritus at the University of Denver. 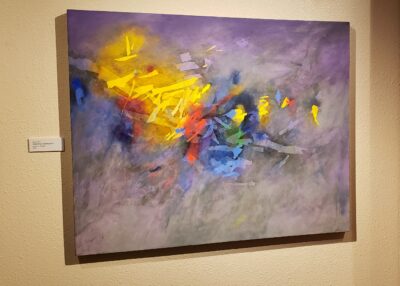 According to his website, Mel Strawn was a leader in the evolution of modern art from post-war abstract expressionism to twenty-first century digital work. One of his contributions was blending images and themes across media – from drawings and prints to large pattern paintings, including some of the earliest explorations of digital fine art, inkjet printing, and solar etchings.

His work uniquely combines layering of color, shape, form, calligraphy, and other images that creates depth and evokes thought and emotion. 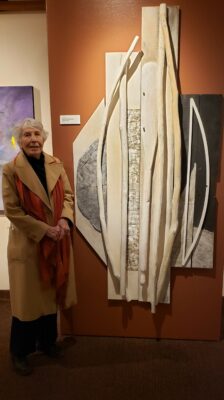 Bernice Strawn and her “Black and White Group”, made of wood and antique metal from a mine in Granite, CO. Merrell Bergin photo

Bernice Strawn’s lengthy professional career includes time spent teaching art and the production of art education videos for public schools in Colorado and more than half a century as a fine artist. While she says her background is in contemporary painting, she is primarily well-known for sculptural constructions.

According to Strawn, she frequently recycles metal and old wood, “which shows the scars of its history, simplicity of shape, individual gestures and refined colors.” “The process involves spending quite a lot of time applying and removing acrylic until it seems to be part of the wood.” Strawn is known throughout Salida for her many contributions to public art. 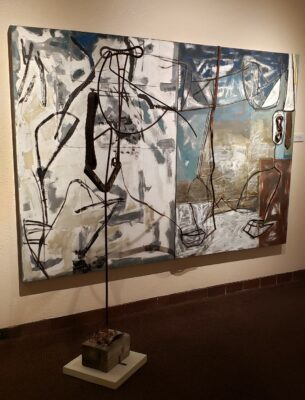 Ben Strawn works in multiple forms and lately, largely in sculpture.  He has also created art furniture in wood, stone, metal, and glass as well as large-scale paintings.

This show features a sample of his Asian series works, incorporating carved wood, metal  and ceramics as well as the combined installation of painting and sculpture, “Off The Wall Conversation”.

The artistic journey of Daniel Strawn has taken many turns. After earning a fine arts degree, he spent more than two decades restoring antiques and designing and building furniture, including purpose-built, art pieces.

A major health crisis in 2019 forced Strawn to rethink his work, restore his health and pull back from this life-changing experience.

Shifting to drawing, he now does what he calls “cartoons”, as well as detailed, more serious print works (both of which are seen in this show), that have visual connections with his prior woodwork career.

Just under two hours from Salida, along the Arkansas River, Royal Gorge, and beyond Cañon City is Pueblo, Colorado, a gem that many overlook, despite an extensive Arkansas Riverwalk and lively arts scene.

Pueblo’s Union Avenue Historic Commercial District is on the National Historic Register, less than a mile from the Sangre de Cristo Art Center. Described as “a century-old business district, it is comprised of sixty-nine contributing properties in a total area of 27 acres including the 1889-1890 Union Depot, Vail Hotel and Quaker Flour Mill.” Antiquities, unique shops, restaurants, and earthy coffee shops and bars abound.

The Sangre de Cristo Arts Center is well worth a day’s excursion for lunch and visit. The Historic Commercial District is a great way to cap off the trip and still be home before dark. Carpool with friends or for a shorter visit, those without a car may take the CDOT Bustang “Outrider” bus for a scenic and hassle-free ride.

The bus from Salida leaves the rider nearly four, mid-day hours in Pueblo, timed just right for the Arts Center and lunch, including some healthy walking between the Pueblo Transit Center and the other, named points of interest. The Bustang schedule is here.