Stuck on Ute Trail, family spends night in their car

A family of four from southeastern Aurora and their two dogs, spent Friday night, March 22-23 in their vehicle, stuck in the snow on Ute Trail (C.R. 2 in Fremont County), not far from where Hans Pope got stuck a little over a week ago. There’s a pattern related to public safety on the full length of Ute Trail. This is yet another incident that highlighting the discrepancy between Chaffee County, which plows C.R. 175 to the county line, and Fremont County, which has steadfastly refused to take responsibility for plowing the road where it becomes Fremont C.R. 2. 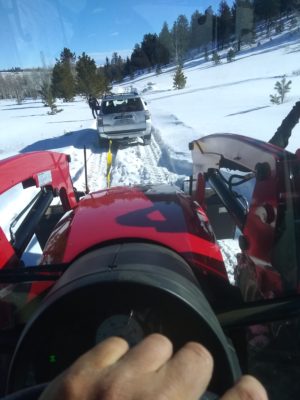 Those who’ve gotten stuck say the fact that the county doesn’t do winter plowing isn’t well-marked. Others using digital technology point out that Fremont County hasn’t bothered to notify Google Maps that the road is not maintained in the winter. This runs at odds with roads such as Chaffee C.R. 306 over Cottonwood Pass, clearly identified on Google Maps as a winter-closed road.

“Our four-wheel-drive got stuck around 7:30 or 8 p.m. and we spent an hour trying to shovel out, without success,” said Derrick Lashway. “My wife had Googled the route and it said it was open. We love driving county roads, and thought this will be a beautiful drive. We didn’t see any closure sign saying the road wasn’t open until we got pulled out the next morning. Nothing.”

The road was fairly clear for the first few miles into Fremont County said Lashway, although he had no way of knowing that it is the local neighbors, not Fremont County, that have banded together to keep that section open. Lashway said more than a quarter mile past Charlie Bearden’s house they hit a huge drift and “that was it.”

“His SUV was the 22nd car I’ve pulled out of the drifts this winter,’ said Bearden who lives a little more than two miles past the county line on C.R. 2. “This is getting pretty old. I’d like Fremont County to take some responsibility. This is a public safety issue.”

In the dark and with temperatures dropping below 20 degrees, Lashway’s family of four, and their dogs huddled in the car all night in the cold. They sought help when it was light, knocking on Bearden’s door.

“It’s not something we’d do again by choice,” said Lashway about the night in the snow, in the woods. “Here’s our question: nothing was really marked and it’s pretty bad when the neighbors have to clear the road. After he pulled us out and back to the county line, we eventually found the sign. It’s only an 8-by-11-inch sign. When it’s dusk how is anybody supposed to see something like that?”

Lashway said that right up to the point where the family got stuck they were doing fine, and he credits Bearden for a good ending to what could have gone very badly. He does have two questions for Fremont County.

“First, this is a public safety thing – how could a county not at least do a better job at signs letting people know? And second, that little sign said it was not a ‘winter maintained road.’ Well last I checked, it’s been spring for a week and that road is supposed to be cleared. So when are they going to plow it?”

Ark Valley Voice posed those questions to Fremont County Commissioner Dwayne McFall Tuesday afternoon. He said he wasn’t aware of the incident, and seemed surprised to hear that Google Maps showed it as an open road. “Well technically, it’s open, but it’s not.  We’ll get it open as soon as we can. There’s no set date. Spring is a date on the calendar, not the weather conditions. We’re supposed to get more snow this weekend and with the wind blowing, even if we plow it will blow shut again.”