After a two-and-a-half-year construction project that’s part of a long-term goal working toward an eight-year vision, the Surf Hotel in Buena Vista opened its doors at the end of May. This 42-room boutique hotel is situated along the Arkansas River in the South Main area, providing a focal point of New Orleans-style charm in the heart of South Main.

The project is an extension of the already successful Surf Chateau. Owner and brainchild of the project Jed Selby anticipates it will bring 25,000 to 30,000 hotel guests a year to the area, in addition to its restaurant and multi-purpose special event venue. He anticipates that it will generate not only more tax revenue for the town, but also benefit other businesses too. 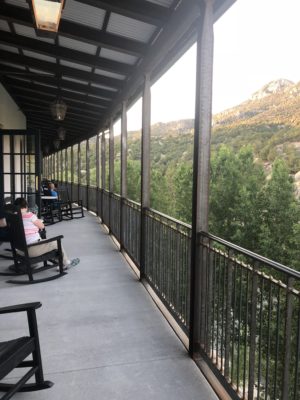 The new Surf Hotel in the South Main area of Buena Vista has wrap-around balconies with scenic views of the Arkansas River. Photo by Melody Buschur.

Selby said that although the community continues to grow, Buena Vista seemed to be lacking in hotels and lodging, especially during the busy months. He included the plans for his hotel in his vision because he understood its value in relation to the expansion of tourism and he wants to maintain a vibrant downtown commercial area.

“Lodging is something that we noticed is in very short supply for much of the year. BV doesn’t have a ton of hotels. If you were to compare it to Salida, it has a fraction as many hotels, so this project has been circling around on our radar since about 2010 when we first designed the Surf Hotel,” said Selby. “We have been playing around with the numbers and the timing, so to kind of dip our toes in the water we first built the Surf Chateau just to see how it would do. After seeing its success, it kind of gave us the confidence to move forward and leap into the larger hotel.”

The hotel staff currently stands at around 90 employees, offering a variety of employment opportunities to Ark Valley residents. Selby said they have begun a strong recruitment program to bring new workers to town to fill the positions because there were not enough people locally to maintain every position.

While the picturesque location of the hotel and its restaurant speak for themselves as magnets to attract business, the Ivy Ballroom is Surf Hotel’s premier event center. It is opening multiple off-season “windows of opportunity” to create a year-around tourism outlet. Selby describes the multi-purpose venue as a design to fit any need, from meetings and weddings to yoga retreats, company dinners and concerts. The state-of-the-art ballroom has soundproof walls and space for 400 concertgoers, or up to 150 for a sit-down meal. It also opens up to a private outdoor space, creating multiple outlets for private or public special-event requirements.

“The idea from a business perspective is that it is easy to sell hotel rooms in July in BV, but it’s harder to sell hotel rooms in February or November,” said Selby. “So this really becomes a tool that allows us to do stuff indoors in the off-season. Our hope is that this will help bring a lot of business not only to the hotel but also to the entire town by hosting those off-season events.”

As a company, South Main is continuing to look toward the future, planning to grow with the infrastructure that town requires. After completing this project and a large growth spurt, Selby says the business is taking a step back to regroup but would like to continue with housing construction, as development is one of South Main’s primary enterprises.

“I think right now, after going through a large growth spurt, there is an element of needing to adjust a lot of different aspects of our business to the new scale,” said Selby. “Shifting back to one of our main businesses, which is construction, will be nice to kind of help build the housing stock of both long-term rentals that have really been a great source of employee housing and also looking at getting more housing in general – which is certainly something that is in short supply in our town, so I think that will be helpful.

“It’s not as impactful as a big hotel, but every house has on average two-and-a-half people and each person on average supports about 20 square feet of retail, so as you build 10 houses you get 25 people, so that’s 500 square feet of retail that can be supported. Those incremental changes really do add up as we have seen over the last decade or so in BV.”