On Friday, July 5, “A Grand Night for Singing” presents songs and stories from grand opera and musical theatre. Highlights Include ‘Tosca’, ‘La Traviata’, and Leadville’s own, ‘The Ballad of Baby Doe’. The show begins at 7:30 p.m., and features opera stars Jill and Jake Gardner accompanied by pianist Andrew Bisantz.

“I am so excited to bring this talent to Leadville,” said curator Scott Carroll of the “High Notes: Music and Theatre in the Mountains” series. “Not only are these individuals captivating and brilliant performers, they are dear friends and colleagues whom I hold so close. This concert is a dream come true.” 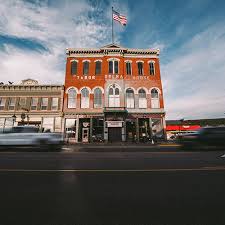 The Tabor Opera House is now the site of high mountain musical performances, including the “High Notes: Music and Theatre in the Mountains” series. Courtesy photo.

At 8 p.m. critically acclaimed American soprano Jill Gardner, has portrayed many leading ladies of the verismo repertoire as well as contemporary heroines. With more than 50 performances of her signature role of ‘Tosca’, she has appeared in acclaimed opera companies across the United States.

Bass-baritone Jake Gardner remains one of the opera world’s most sought-after singing actors. Having sung a decade as principal baritone with Oper der Stadt Köln under the baton of James Conlon, Gardner has a long and distinguished career performing with major opera companies and orchestras worldwide.

The accompanying pianist, Andrew Bisantz, is an exciting American conductor acknowledged for his passionate and commanding leadership from the podium. He is building an impressive roster of credits at leading national orchestras and opera companies throughout the country.

At 8 p.m. Saturday, July 6, Aaron Lee Tasjan takes the stage at the Tabor Opera House. Tickets for his performance are $20 in advance, and $25 the day of the show.

Tasjan, known as one of the wittiest, most offbeat, brilliant Americana troubadours writing and singing songs today, performs at 8 pm. Saturday, July 6, 2019.

According to Tabor House, the audience can expect glammy, jingle-jangle, power-pop- and- psych-tinged sounds from Tasjan’s younger days playing lead guitar for a late-period incarnation of The New York Dolls.

“I believe this band is destined for large audiences and big stages in their future,” said curator Rob Miller of Pickin’ Productions, who created this season’s Pickin’s Picks series.

“He came out in a top hat, colorful clothing, and almost an eerie confidence about him,” said Miller, recounting the first Tasjan show he attended. “The minute he launched into the first song, you knew one thing—rock and roll is alive and well in this band. One song will remind you of Tom Petty, another David Bowie, and yet another, the Beatles. They’re original, funny, and powerful. But given these clear influences, they’re approachable and familiar at the same time.”

Tickets for both shows are available online at TaborOperaHouse.net and at the Box Office, 308 Harrison Ave., Leadville.