The Colorado School Board Waters are not Calm: Part II – Stealth and Transparency

A school board’s role is as a policy-making body whose primary functions are to establish policies for the district, provide for the district’s general operation and personnel, and oversee the property, facilities, and financial affairs of the school district. Political parties are not declared, but observation can reveal what isn’t written.

This year, in concert with the major disruptions being perpetrated upon other Colorado school boards and school administrations by agitated parents — protesting facemask-wearing, mandatory vaccines, demanding everything from curriculum control to classroom cameras — there has been a surge in candidates who are clearly conservative and being promoted by some, but by no means all, county GOPs. School administrations and those who track school board elections say it appears to be part of a national drive to replace incumbent school board members with right-wing ideologues who oppose public safety measures, or schools teaching students about racism.

A candidate filing to run for an elected school board position must file basic campaign finance information with the state of Colorado and report finances on a quarterly basis. This includes receipt of any contribution or any expenditure on behalf of the candidacy. Candidates may not accept any contributions prior to registering a candidate committee.

At first glance, the spending on Democratic school board candidates for 2021 in the state of Colorado appears much higher than Republicans, although much less than the expenditures on lobbying and issues. But that is deceiving. A category titled “other” that at $7,142,868 is the largest contribution category. This is where financial contributions from PACs and PAC campaigns are growing.

Those contribution sources aren’t listed, but the money is flowing in to school board races across the nation, and much of it is in support of Republican candidates. In fact, as reported this week by Popular Journalism, the “grassroots” group targeting school boards is run by a Koch brothers-linked operative. Since its formation earlier this year, the Virginia-based Parents Defending Education (PDE) has emerged as a leading group targeting school boards.

Local School Board Races a Mixed Bag of Stealth and Transparency

Looking at just three counties and four very different school districts in Chaffee, Lake, and Summit counties, there is at least one apparent stealth campaign underway. In some districts, candidates are not responding to media questions (including questions about why they are running and what their focus would be should they become a school board member) and declining to appear at public forums with other candidates so the general public knows where they stand on issues. Instead, they appear to be speaking on social media only to their followers, or their party of choice.

Perhaps a litmus test for a county that leans well onto the blue side, the activity in Summit County’s school board race is seeing a slate of nine candidates competing for four seats. Four of those candidates represent the 4 For The Kids campaign; as of the Oct. 5 filing with the Secretary of State, the foursome had close to $23,000 in donations (an unheard-of level of contribution in Summit County), compared to $3,000 gathered by the four candidates (three incumbents) supported by the Summit Democrats and the Summit County Education Association, which represents more than 85 percent of educators in the county.

Patti McLaughlin, chair of the Summit Democrats, said 4 For The Kids “just flooded the county with a mail campaign to all registered voters and a texting campaign to everyone… We are in a real fight in a very blue county.”

According to literature in the group’s website and interviews in the Summit Daily News, the 4 For The Kids candidates say they are focused, among other things, on reversing a downward trend in academic performance that was present well before the COVID-19 pandemic. But McLaughlin characterized the group as carrying an underlying far-right agenda and being “anti equity.” The school board approved an equity policy earlier this year, targeting historical inequities in public schools and tying achievement gaps with gaps in opportunity, including language barriers.

The Summit County Democratic party has been urgently emailing its members for support, and encouraged attendance at an Oct. 18 candidates night at Summit High School — and all candidates showed up for the event.

Like candidates in many locales who are responding to some, but not all invitations to forums and news interviews, the 4 For The Kids candidates participated in a recent Q & A with the Summit Daily News, but declined an interview with the local education association. 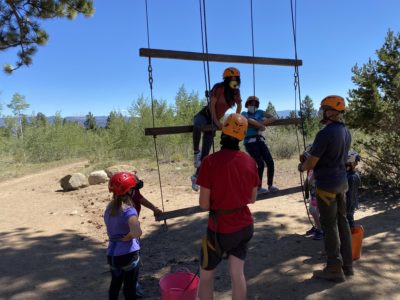 Lake County has not had the COVID-19 caseloads of other mountain counties. In fact, last year, it created a unique and collaborative indoor-outdoor learning environment including student tutoring, that supported its diverse student body. The spending behind candidates there is low or non-existent; the concerns more typical of a rural district focused on core curriculum and student welfare.

Chaffee County, which lately has leaned purple, but has distinctly “red-north – blue-south” leanings, shows a different pattern. In Buena Vista School District, those candidates viewed as more conservative (all of whom list themselves as non-partisan rather than by party) all five participated in the League of Women Voters invitation to their candidate forum. Five candidates are running for three open seats.

Along with those running for re-election, four of the five BV School Board Candidates did attend a Chaffee GOP-sponsored forum at the local Lighthouse Ministries, where the questions began with critical race theory and the 1619 Jamestown project, then moved on to face masks, vaccines, and whether classroom cameras are necessary. There was little disagreement and the audience was genial, appearing to confirm Buena Vista as conservative-leaning. Tracer’s financial filings are a requirement of candidacy, and candidate  spending across the board is low or non-existent in this race.

The school district can proudly point to the fact that its students’ test scores remained high during the COVID-19 year of in-person and online learning. It has eight candidates running for four of the five district seats (the fifth seat is empty).

Candidate records show three of the candidates running for election (all listed in a recent Chaffee GOP meeting minutes as GOP) are running as non-partisan candidates who have turned down opportunities to participate in the League of Women Voter’s forum (Catherine Rich, Abby Jefferson, and Jennifer Adamson). While none of the three answered the first round of candidate questions posed by Ark Valley Voice by the publishing deadline, at least one of them has responded to the second round of candidate questions, along with all the other school board candidates (Carrie Coscarella-Mattix, Jodi Breckenridge Petit, Mandy Paschall, Joe Smith, and Jeannie Peters).

Update as of Oct. 20: The group calling itself Honesty in Chaffee County under Protest, run by Jerry Raski, has revealed an $804 expenditure with The Mountain Mail for ads supporting Abby Jefferson, Catherine Rich and Jennifer Adamson. 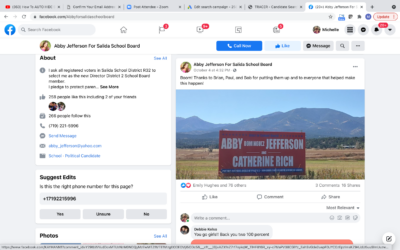 The final financial reports to Tracer are not completed until after the election, so AVV will be doing a final report.

The second round of AVV Salida School board candidate questions begins as a series Wednesday afternoon.