I’d imagine that most Salida/Chaffee County residents would agree that there is a severe shortage of affordable or attainable housing for our local workforce. The high prices you see in newspapers, on real estate sites, etc. are largely due to forces beyond local control—elevated land, materials, labor, and transportation costs, etc.—all of which have driven up the cost to build homes over the last several years. 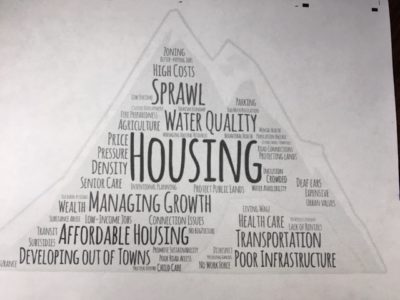 During the development of the Chaffee County Comprehensive Plan, residents participated in word cloud development highlighting the issues most important to them. Housing was the top issue.

Perhaps more significant, though, is the fact that this valley has been discovered by a nationwide pool of prospective residents, vacation-home owners, and investors who also monitor the real estate listings and generally have more buying power than those who already live and work here. (Full disclosure: my family and I moved here from the Front Range several years ago, ourselves.)

If permanently affordable housing (PAH) was easy to build, we probably wouldn’t talk so much about it. Unfortunately, PAH doesn’t just fall out of the sky with land magically connected to water, sewer, and city streets. As one of those closest to the issue here in Salida,

I feel obligated to provide all the information I can about PAH, so I am going to share with you some “dirty little secrets” about affordable housing that everyone should know.

First, let’s define PAH as: housing that is permanently affordable to owners and renters at no more than 30 percent of that household’s gross income (the typical standard for “affordability”).

Given that current market prices for homes are beyond what the vast majority of Chaffee County households can afford, PAH can benefit a wide variety of people—from the lowest income-earners to those making really good money yet not enough to afford what’s out there.

Now, here are those dirty little secrets (including a few, very specific to Salida):

1. “Affordable” housing doesn’t mean it’s cheap to build. Locally, even the most basic units now cost around $300-$400 per square foot to build—especially when you factor in the price of land, infrastructure, materials, labor, and “soft” costs like interest on a building loan.

2. Affordable housing units only remain affordable when something requires them to be. A housing unit is not permanently affordable if someone can buy it cheaply today but sells it for 25-50 percent more a year or two later. Deed-restrictions and housing/land trust models are the best tools communities have to keep units affordable over time.

3. Developers have little-to-no incentive to create PAH on their own. When building a home costs several hundreds of thousands of dollars, and you have to borrow millions to build several of them or more, why would anyone build anything if they knew they’d likely lose money on the whole venture by selling them for less than the cost to build? Most private developers only provide PAH when there’s either a carrot or a stick (or both) involved.

4. Housing authorities and local governments require significant (and reliable) revenue sources in order to build PAH. Just like private developers, housing authorities and others frequently need to borrow money to build their projects. And lenders need to see proof of reliable “income” (e.g. taxes and other consistent revenues) before they will lend that money—even to government agencies.  Grants can occasionally help, but they are unreliable and often come with lots of strings attached. Currently, the City of Salida only has about $160,000 in its affordable housing coffers (not nearly enough to take to the bank for a sizable project), and the Chaffee Housing Authority has even less.

5. Not a single housing unit will be built in the South Arkansas River Sub-Area (aka “SARSA” or the city-owned Vandaveer property) until a master plan is created and infrastructure is installed. There are no water lines, wastewater lines, or streets within the 100-acre city-owned parcel. These will likely cost millions to install. A master planning process will begin this winter, but considerable amounts of money (and time) will be needed in order to build PAH and other elements that people would like to see there.

6. The City has very little “other” land where it can currently build PAH. Other than SARSA/Vandaveer, most city-owned lands are in the form of parks or open space. I’m not exactly sure that turning our parks into large housing developments would be a very popular decision, and all other locations have restrictions that prevent housing from being built there. The half-acre property at the corner of D and  First Streets is an exception, and the city is working on plans for affordable workforce housing there—but again, it takes a lot of money.

7. Despite the lack of dedicated funding, the City of Salida has still taken a number of steps towards increasing the PAH supply, especially over the last year or so.

The types of projects that will increase the supply of permanently affordable housing the most, however, will require community funding—and there are, legally, only a few means by which that type of money can be raised.

Editor note: the writer reports that “The information presented here was written without the use of any public funds.”