The good news? Community Wildfire Protection Plan is on target and in some places, ahead of schedule

Among other things, last year was a time for hell-like fires across Colorado and elsewhere in the West. But after the Decker Fire in 2019, Chaffee County was spared from large infernos in 2020, and meanwhile, local efforts for wildfire protection got a strong foothold as the Envision Forest Health Council saw several aspects of the local wildfire protection plan come into play.

A progress report on the first year of the updated Chaffee County Community Wildfire Protection Plan shows significant movement toward the 10-year goal of treating 30,000 acres by 2030, which is estimated to reduce community wildfire risks by half. As of February, there were 1,684 acres of completed forest treatments and another 14,000 acres in the planning pipeline. 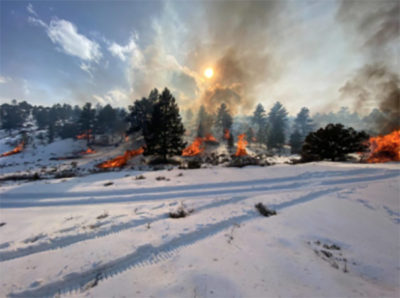 Among the fire-protection treatments accomplished in 2020, the Bureau of Land Management burned 2,600 piles of slash in several locations. Envision photo

The Envision Forest Health Council, which formed to carry out the plan and which has grown to 35 members and 19 organizations. It has seen $2.6 million raised to carry out treatments and develop new programs to support healthy forests, and $1.4 million raised from outside sources by leveraging public funds. It has gained new participation from Lake County, regional power providers, and state and national conservation groups.

Some of the Council’s key players docked in with the Chaffee County Board of Commissioners March 16, showcasing the past year’s success stories as well as what is in store for the near future. They noted that while fire risk reduction is taking place in larger forest spaces, local individuals and neighborhood communities are also coming onboard. 346 private landowners improved their defensible spaces over the past year and four neighborhoods took the preventative steps for Firewise USA certification.

Among the year’s larger efforts are two major fuel-break projects. The Methodist Front project, which began in February 2021, is a 10-mile stretch of fuel reduction on public and private lands in the foothills of Methodist Mountain and extending to Poncha Pass. The endeavor protects 7,000 residents in the Salida and Poncha Springs communities and enhances wildlife habitat in the 8,200-acre project area.

As well, the Coyote Valley Road project is designed to create a fuel break west of Hecla Junction leading to Collegiate Peaks Wilderness. The project makes it safer for firefighters to access the forest in the event of a wildfire, as well as protect structures and provide better egress for residents and visitors. The break primarily runs through Mesa Antero Estates and ties into 6,000 acres of forest to the west, where the U.S. Forest Service has either completed or is planning mitigation work.

Additional treatments in 2020 included the Bureau of Land Management’s project to burn 2,600 piles of slash.

On the community-action front, 200 landowners in four locations took advantage of the Chaffee Chips program, which produced 500 piles of slash. The Chaffee Treats program engaged 161 landowners to pursue treatments on more than 2,500 acres of private land, and the American Forest Foundation recently contributed toward the work.

The slash from Chaffee Chips events is chipped by the large tub grinder at the county landfill, and trees that are thinned for large fire mitigation projects are sometimes piled by hand and burned when conditions are right. Other times they are “masticated,” or ground up on site and left on the ground to help regenerate the forest.

Cindy Williams, co-lead for the Envision Chaffee County process, cited the wide collaboration among groups for the program’s success so far and noted that forest treatments and the engagement of private landowners are actually ahead of schedule.

Commissioner Greg Felt lauded the group for its planning and on-the-ground accomplishments. He said the county-wide 1A ballot measure that was passed in 2018 has been a springboard for much of the action, providing sales tax funds for water and forest health, working lands and the effects of growth in recreation. “The fact is that we made this move as a community…” he said, “and it is really, really paying dividends.”