The Growing Unity of NATO, as Russia Continues to Menace Ukraine

As Russia continues its invasion of Ukraine, what could be said to be the most striking aspect of this crisis is the growing unity of NATO. The nations of the North Atlantic Treaty Organization (NATO) have exhibited striking cohesiveness as the European continent faces the most dangerous threat to peace since World War II.

Yesterday many of the NATO nations began applying the first stage of financial sanction against Russia. Germany announced that it would halt the certification of the new Nord Stream 2 energy pipeline between Russia and Germany. Japan and Australia joined the list of democracies placing sanctions on Russia. 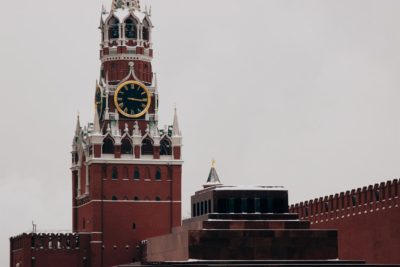 The clock town at the Kremlin, with Lenin’s Tomb in the foreground. on Red Square in Moscow, Russia. Image courtesy of Unsplash

NATO allies are sending weapons and equipment to Ukraine, and positioning NATO troops and equipment in NATO counties bordering Russia, and its satellite state, Belarus.

This morning, the U.S. sent another 800 troops to the Baltic countries of Latvia, Lithuania, and Estonia; not large, but a political signal to Putin that if he attempts to involve those countries, Russian troops will be fighting U.S. troops.

Condemnation has been nearly universal across NATO, and the crisis is now prompting two formerly reluctant nations Sweden and Finland, to seriously consider joining NATO. The United Nations Security Council, of which Russia and the U.S. are permanent members, has been rendered unable to issue more than vocal criticisms due to Russia’s veto power.

Ukrainian President Volodymyr Zelensky has issued a reserve call-up for all between the ages of 18 and 60, and today declared a state of emergency. Even Ukrainian grandparents are training with weapons, and a recent poll showed that more than 50 percent of Ukrainians say they will stand and fight — they will not give up their nation to Russia without a fight. One of the largest humanitarian crises in Europe since World War II is looming.

That this is an invasion is not in question. In fact yesterday the Russian Duma (that is their window-dressing of a congress) unanimously approved a step Russian President Vladimir Putin had already taken – approving Russian troop movement onto the soil of another sovereign nation with the intent to invade and take control of the territory.

While Ark Valley Voice has received a few reader comments asking why we aren’t explaining the “Russian side of things,” the plain fact is this: there isn’t one. Russia is breaking international law. It is undermining Ukraine’s sovereignty. Russia is an authoritarian dictatorship and Ukraine is a democratically-elected democracy. This is a David and Goliath saga and Ukraine is David.

No matter what Fox News talking head Tucker Carlson would like us to believe, Russia is not protecting its borders, and it has no right to Ukraine. Putin is bullying his neighbor and taunting the world with his actions — daring anyone to stop him.

“There is no middle ground here. Calling for both sides to deescalate only gives Russia a pass. Russia is the aggressor here,” said U.S. Ambassador to the United Nations Linda Thomas-Greenfield, addressing the United Nations General Assembly this morning. “Russia’s actions have only confirmed what the U.S. and allies have been warning about. This is 2022, we are not going back to an era of empires and colonies. He will use force to make a farce of the United Nations.”

This morning here (late afternoon Wednesday in Ukraine) Russia began a cyberattack against the Ukrainian government. By 12:00 noon MST, the U.S. Department of State, strengthened its sanctions against Russia, with spokesperson Ned Price saying “New sanctions are just the beginning of our response.” He added, “One of the most important tools in our toolbox is trans-Atlantic unity. We are acting in unity to take these steps.”

By 1:00 p.m. Wednesday, U.S. intelligence had warned of an “imminent full-scale invasion of Ukraine by Russia.”

Putin can illogically and angrily declare that in his view there never was a Ukraine, that it has always been part of Russia, but as they say in Wisconsin ‘it ain’t so, Joe.’ Through the centuries Ukrainians have repeatedly struck out from under those empires that have sought to control them. In the case of Russia, they enslaved millions of Ukrainians in serfdom, and during the Stalin era, Russia manufactured a famine in that country (previously considered the breadbox of the Soviet Union), that killed millions.

If another country had done that to your family, do you think you’d welcome them in?

As democratic America watches Russia’s authoritarian invasion of a democratic country, it could be tempting to dismiss this with a ‘what has this to do with us?’ That would be unwise.

Russia’s actions have fueled a world crisis and authoritarian China is watching, with an eye on its claims on democratic Taiwan. Not only are troops on the move to fulfill our NATO treaty obligations, but energy prices will no doubt be impacted for at least weeks and perhaps months to come. We will feel this at the gas pump. Russia has already threatened cyberattacks beyond its immediate target of Ukraine. They could hit U.S. businesses, government, and banking institutions, as well as the energy, telecommunications, and transportation sectors. We wait on what could happen half a world away, as well as at our fingertips.