Longtime Colorado favorite The Hazel Miller Band will return to the Tabor Opera House Labor Day weekend for a special evening concert. The band will bring its eclectic blend of blues, jazz, R&B, pop and original music to the historic stage in Leadville, at 7:30 p.m. Saturday, Aug. 31, 2019.

Miller formed The Hazel Miller Band more than two decades ago when she was already a known performer. The present members are a tight-knit family of talented musicians and singers performing music designed to make the audience dance and sing along.

Concert tickets are $20. They are available online at www.TaborOperaHouse.net, and at the box office, 308 Harrison Ave., Leadville. 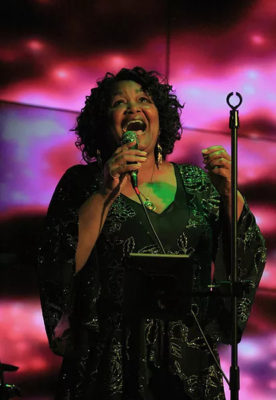 Miller has performed in many prominent venues, including a 2016 National Anthem rendition on ESPN for a Denver Broncos’ game, seen by more than 30 million viewers. She was tapped to sing the national anthem at the inauguration of Colorado Gov. John Hickenlooper and was one of the featured performers that evening at the Governor’s Inaugural Concert.

Her staff estimates that Miller’s unique blend of blues, jazz, R&B and pop as a single performance was seen by some 180 million viewers worldwide during the FIS Alpine Ski Championships in Beaver Creek.

That same resonant voice has welcomed visitors arriving by train to the main terminal at Denver International Airport and been heard in concerts around the world during tours.