If the seventh session of the Jan. 6 Congressional Committee investigating the assault on the United States Capitol building – and in fact our democracy — showed us anything, it is that there was nothing “spontaneous” about the events of that day. They were planned. They were choreographed, and yes — they were purposely violent.

Violence was the final card that Trump and his faithful had to play. They had pursued the court solution, and all 67 cases alleging voter fraud were dismissed for lack of evidence. 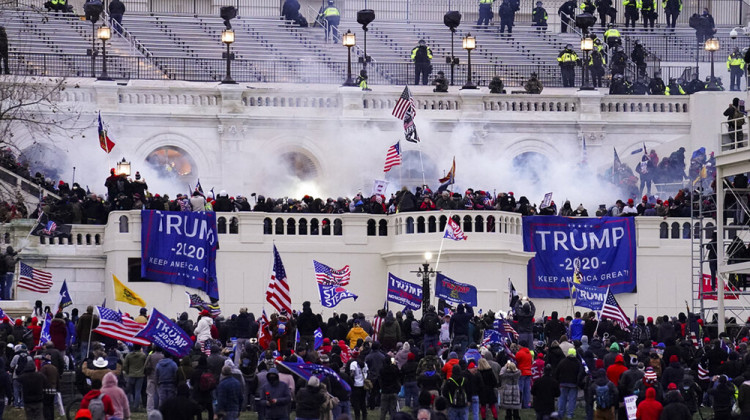 Violent protesters, loyal to President Donald Trump, storm the Capitol, Wednesday, Jan. 6, 2021, in Washington. It’s been a stunning day as a number of lawmakers and then the mob of protesters tried to overturn America’s presidential election, undercut the nation’s democracy and keep Democrat Joe Biden from replacing Trump in the White House.
AP Photo/John Minchillo

They had pursued the idea of creating false slates of state electors and attempted to influence state votes — and failed.

Trump and his loyalists had attempted to convince Vice President Mike Pence to do the dirty deed; to refuse to accept the electoral vote count, thus sending it into the then-Republican-controlled House of Representatives. But Pence had finally found his democratic “big boy underpants” and refused. That left violence and force which, we now know, was not an accident – it was the plan.

During Tuesday’s hearing, the committee showed the world that days before Jan. 6, Trump was in touch with private, armed militant groups to come out in force for him. The date was purposeful — it was the day, per our Constitution, Congress assembles to certify the election results. Trump planned to incite the mob to march on the U.S. Capitol.

He scheduled a rally at the Ellipse in front of the White House and told rally organizers that he intended to point the crowd toward the Capitol. He also intended to go there with them; whether to lead them or just accompany them, we don’t know. “POTUS is going to have us march there/the Capitol,” said rally organizer Kylie Jane Kremer in a January 4, 2021, text message shown by the committee.

We learned that in the build-up to the Jan. 6 assault, there was a bizarre Dec. 18 meeting called by an increasingly unhinged Trump, flailing about to remain in power. It was a witches brew of conspiracy theorists discussing seizing voting machines and declaring marshal law. It included the White House legal team, attorney Sidney Powell, Rudy Giuliani, and former national security adviser Michael Flynn. Trump is reported to be determined to name Powell a White House Special Counsel to go out and grab equipment and somehow “prove” that the election was fraudulent.

Trump’s former White House lawyer, Pat Cipollone, testified about fighting the increasingly bizarre ideas coming from the people who were whispering to Trump in his final days in the White House. That night, the entire White House legal team threatened to quit if voting machines were seized, and somehow won the day from Flynn and Powell.

But after that late-night meeting, Trump didn’t go to sleep. At 1:42 a.m. on December 19, he sent a tweet that urged his supporters to come to Washington. “Be there, will be wild.” The violent insurrection was underway.

His supporters took that as the summons as it was intended and arrived in Washington D.C. Not just ordinary people showed up. So did militant private armies — the Oath Keepers, the Proud Boys, and the Three Percenters — who proceeded to do what they had never been known to do before then; they collaborated. Their objective: an assault on our seat of government.

We saw and heard the Jan. 6 committee evidence that Trump incited the insurrection when all the other efforts failed to overturn the election. We heard witnesses say that he “summoned the crowd, he incited the crowd and he pointed it at the Capitol.” He knew it was armed and dangerous and for Trump — that appears to have been the point. 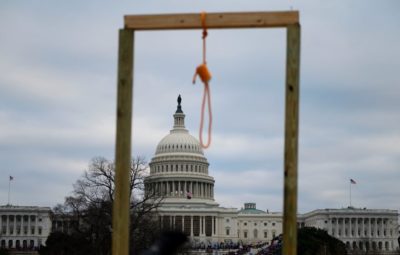 A noose is seen on makeshift gallows outside the Capitol on Jan. 6. Photograph: Andrew Caballero-Reynolds/AFP.

When the Secret Service told the president that the crowd that showed up for the rally was armed and wouldn’t surrender their weapons to enter the secured area, Trump was furious. He told the Service, “I’m the f—ing president and I say let them in. I don’t f—ing care if they have weapons, let them in … They aren’t here to hurt me, let them in. Let my people in.”

What Trump knew, and the rest of us did not — was that the private organized militant groups (we won’t call them militias because that would somehow give them a veneer of legitimacy, which they do not have) were already on their way to the Capitol.

It was those organized private armies in stack formation who led the way into the Capitol in multiple locations, breaking, entering, smashing, and inflaming an insurgent crowd ready to do what they had been told to do: to stop the electoral college vote.

The crowd picked up the chant “Hang Mike Pence” and “Hang Nancy Pelosi”. A crowd of Americans actually chanted death to the next two people in the line of succession for the presidency after the president. Think about that for a moment.  The danger, especially to the Vice President, was much greater than we knew at the time.

For hours what Capitol Police described as medieval combat went on — as Trump watched the violence from televisions in the West Wing and threw catsup and plates at the wall of the West Wing dining room. It was hours before Trump told them, finally and unwillingly — to go home.

Jan. 6 has become part of the darkest day in the history of our democracy, but the hearings are not over; another is scheduled for Thursday evening, July 21. What will ‘We the People’ learn next?