A much-questioned proposal to allow up to 12 large-scale events a year at the Meadows Farm in Buena Vista is back at the drawing board following the Tuesday, April 6 Chaffee County Planning Commission session.

The planning commission aired the proposal and feedback it received from key agencies, then voted unanimously to continue discussion to July 27. Because of the continuance, the board didn’t hear public comments. 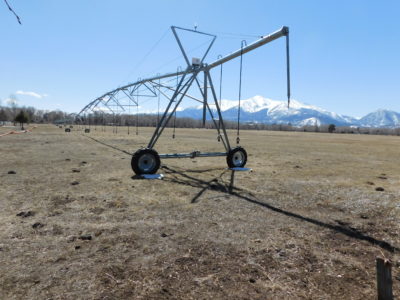 The Meadows parcel spends most of its time as an agricultural facility. Greg Wright photo.

About 90 people logged on to the Zoom call  – considered a large audience for Commission matters. Applicant Jed Selby announced early on that he wanted to continue the hearing to a later date to respond to the considerable feedback the plan has seen.

The plan drew critical written commentary from community members, who were generally upset about the potential impacts of traffic, noise, and the frequency of events. Staff and agency feedback brought up issues such as emergency response, diminished cell service, stress on road surfaces, the introduction of noxious weeds and school buses navigating congested roads.

In the application, the Meadows Farm was seeking approval to increase the use at the 277-acre grassy venue, best known as home of the Seven Peaks Music Festival, Campout For The Cause and the Battlemoor Renaissance Festival. The initial proposal called for up to 12 events per year with more than 1,000 attendees and unlimited smaller events, but Selby told the commission that in reality he envisioned far less.

“We see this as a process,” he added. “We want to be respectful and responsive.” Selby appeared on the call with Davis and Matt Farrar of Western Slope Consulting out of Carbondale.

They said the plan is to create “predictability” for the aforementioned events – none of which were held in 2020 due to the COVID-19 pandemic – and to add a mid-size event featuring bluegrass, Americana and folk music. There would also be the opportunity in the plan to bring in a touring band such as the Gentlemen of The Road show, but not make it a recurring, annual event.

Seven Peaks is by far the largest of the events at 25,000 attendees over Labor Day Weekend. The Campout for the Cause, typically held early in the summer, sees 5,000 participants while the potential bluegrass event is listed at 15,000 and taking place in the fall.

Citing the compatibility of temporary features with agricultural production, the plan doesn’t call for any permanent structures on the property.

Beyond that, the plan calls for the site to host community events that are not music oriented, as well as weddings, birthdays and family get-togethers.

Part of the request is to allow smaller events of up to 1,000 people. The county’s land-use code  already defines small events – which don’t require a special event permit – as 500 or fewer people, including staff.

Selby said that by hosting events, the residentially zoned property stands a better chance of continuing its long agricultural heritage as open land, rather than being developed. The site is on county land that abuts the western edge of Buena Vista and runs along Cottonwood Creek. It produces hay and provides winter space for cattle, as well as significant habitat for deer, elk, bald eagles and bear. Selby said his family bought the bank-owned property 10 years ago and over time nursed it back from a state of disrepair.

He said he fell in love with the space and its enormous views, and when he introduced it to people in the music production business, they saw huge potential.

So now the applicant is back at the plan, working with county staff to refine the numbers and magnitude of potential events, and to produce other details requested at the meeting. While there is certainly room to adjust the plan, there remains concern about neighborhood impacts and the carrying capacity of county agencies and the Town of Buena Vista.

As an example, Chaffee County Planning Manager Jon Roorda said staff was concerned about County Road 350, the main artery to the property, as already being over-traveled and under-maintained, and that there hasn’t been an engineering study to see if the pavement can handle additional vehicles, including RVs and large trucks entering the property.

“Our roads are just not built for the level of traffic being proposed for these uses,” he said.

Rich Atkins, Emergency Manager for Chaffee County, said that large events put a huge surge in cell phone use that can cripple service in the area and that there are safety issues relating to communications. “How do we get an emergency message out?” he asked.

He said there were considerations about emergency evacuation plans as well as a host of hazards: heavy rain, lightning, fires and active shooter situations.

“The biggie is,” he said, “do we have the capability to handle these large events?”

Chaffee County Planning Commission Vice-Chair Marjo Curgus said the situation pointed to imperfections in the county’s codes as well as one of the biggest concerns in Chaffee County: losing agricultural spaces to development.

“We know that we’re losing ranch land across the region at a rapid rate,” she said.

Featured image: The Main Stage at the Meadows during the Seven Peaks Music Festival. All stages at the Meadows are temporary structures to preserve the open, agricultural feel of the place. Ark Valley Voice file photo.