Somehow, an American businessman who makes chopped foam pillows thinks that qualifies him to determine that somehow China must have stolen the 2020 election. That absurd claim  was one of the more remarkable headlines of a remarkable newsday in a shocking final two weeks of the current president’s tenure, in which President Donald trump has attempted to cling to power. 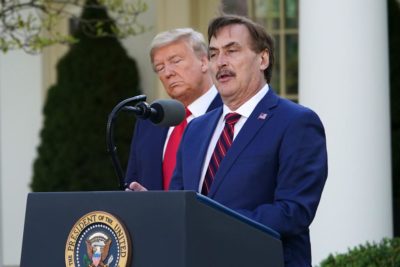 Mike Lindell, known as the My PIllow guy, vistied the White HOuse only a few days ago, suggesting to the presdient htat he could declare martial law to stay in power. Image by Getty Images.

The CEO of My Pillow Mike Lindell, told Axios this afternoon that “I want Dominion to put up their lawsuit because we have 100 percent evidence that China and other countries used their machines to steal the election. Dominion Voting Systems, for its part, on Monday sent a cease and desist letter to My Pillow CEO Mike Lindell over his spread of misinformation related to the 2020 election ” Dominion’s letter reads… “Despite knowing your implausible attacks against Dominion have no basis in reality, you have participated in the vast and concerted misinformation campaign to slander Dominion … Litigation regarding these issues is imminent.

No evidence has been produced of any election fraud, 60 courts have looked at and dismissed the idea that there is an evidence of election fraud, and all 50 states certified their elections.

Lindell, has visited the Oval Office in the White House in the past few days, where he floated the idea of an inciting incident that would then prompt Trump to be able to declare martial law. He has no experience in foreign policy, governance, or for that matter, election operations.

What he does have is a significant election donation investment in Trump and he was a fixture with Trump on the campaign trail. He also paid a significant portion of the $2 million bond for the high-profile figures who helped bail out Kyle Rittenhouse, the right-wing sympathizer who is charged with killing two protesters at a Wisconsin Black Lives Matter rally over the summer.

The claim, which does not appear to have any basis in fact, prompted Dominion to send a cease and desist letter to Lindell for spreading disinformation related to the 2020 election.

The situation is already fraught with disinformation, as Trump and his allies have intentionally spread false conspiracy theories about the results of the election, and Dominion Voting Systems.

For its part, Dominion’s cease and desist letter says … “Despite knowing your implausible attacks against Dominion have no basis in reality, you have participated in the vast and concerted misinformation campaign to slander Dominion … Litigation regarding these issues is imminent.”

Dominion is also suing pro-Trump lawyer Sidney Powell for defamation and $1.3 billion in damages, and a Dominion employee , Dr. Eric Coomer, has sued Trump himself, One America News Network (OANN) and Newsmax.

It should go without saying that this might not appear to instill confidence in chopped foam pillows made in Minnesota.