Their Voices: The Human Experience through Civil Disobedience 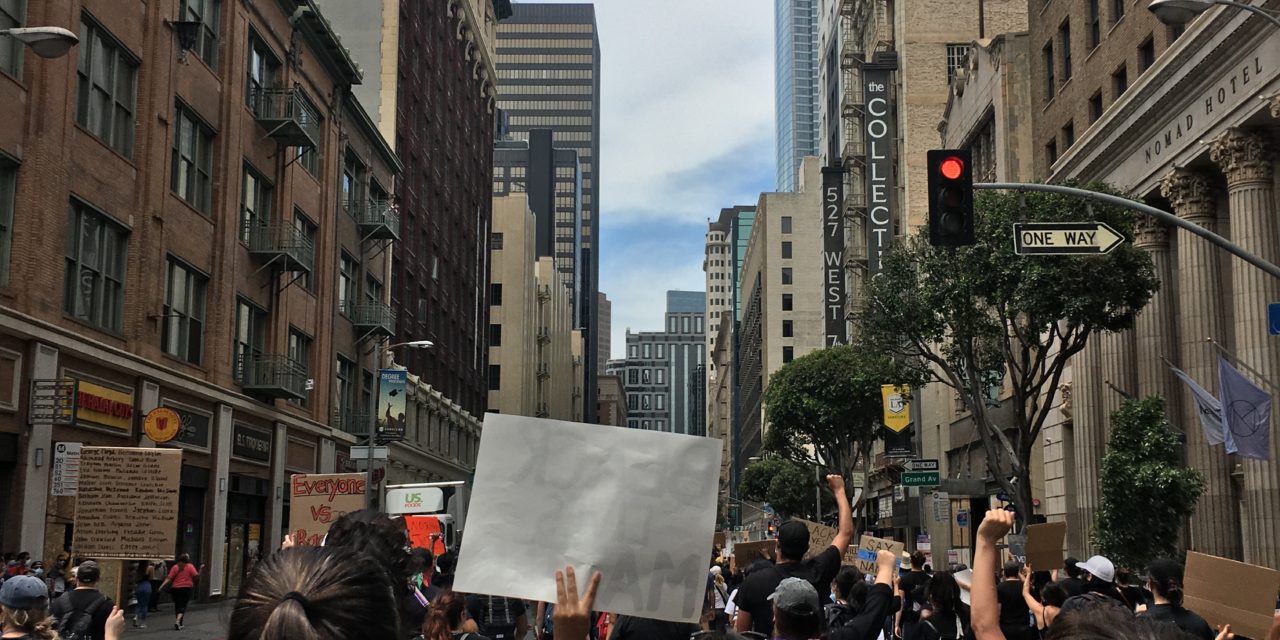 As the protests over the death of George Floyd at the hands of Minneapolis Police on May 25 have grown nationwide, the multi-racial, multi-generational protest activities appear to have become a movement. Not since 1968 has the nation seen such a united effort to overcome social injustices and systemic racism. Beginning on June 5 and continuing today,  Ark Valley Voice documents the protest experience of 2020, keeping identities concealed because of what they experienced.

He is a 26-year-old white male who is living in Los Angeles as an independent freelance contractor working in film; specifically lighting design. Due to his civil disobedience, he has asked to remain anonymous. Contrary to impressions being advanced by some, he describes an overwhelmingly peaceful protest.

He attended protests on June 1, 2, and 3 all of which he described as peaceful. Every day he protested, he arrived and left before the citywide curfews began.

When asked why he was protesting he explained “I feel like it is the right thing to do. The message, what we’re trying to do, and what is happening in our country right now, it is important to be out there.”

On Monday, June 1, he protested in downtown Los Angeles at City Hall.  He was there from 3 p.m. to 4:35 p.m. The curfew was originally set for 8 p.m. Around 4:30 p.m. he received a notification that it had changed to 6 p.m. leaving only a couple hours to return home. 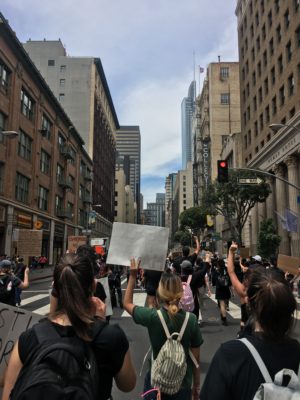 While protesting on Tuesday, June 2 in Hollywood, he received a notification stating the curfew would start at 6 p.m. Five minutes later he received a second notification that the curfew had been moved to 5 p.m., addressed to him saying “It was a mistake. There was a lot of miscommunication when it comes to the curfew.” On Tuesday he protested from 3 p.m. to 5 p.m. He later went on to say that, for him, this was the most impactful day of protesting.

On Wednesday he protested again in downtown Los Angeles from 3:30 p.m. to 7:30 p.m. While downtown the curfew changed to 9 p.m. “There was a lot of push back, so they changed it to 9 p.m. and only enforced it at 10 p.m. A good number of people got arrested which is unfortunate.” This confusion contributes to the chaos protestors face.

He went on to explain changes being made due to the protests. “In the last three days, one of the biggest pushes is[to] defund the police. LA announced that they’re cutting $150 million from the police budget. I think it’s the first step. Hopefully, it doesn’t silence people or stop people from getting out there.”

Out of the three protest days, he says Tuesday, June 2 was most impactful for him, both during and after the protests, but that protesting wasn’t easy to do.

“They’re shutting down the subways and places to park. Essentially, they’re making it really hard for people to get down here. We understood there was a protest going on, but we didn’t really know what exactly it was going to be. We parked and walked up to Hollywood on Hollywood Boulevard and immediately just found this massive group, maybe thousands. They were marching down the Boulevard and we got in and proceeded to walk for two and a half hours all over Hollywood. I think we ended up walking nine miles that day.”

Speaking to why the day was impactful for him he said, “the other days had really awesome speakers and people leading the charge but walking around Hollywood was insane. All of the businesses were boarded up with plywood and it seemed so unnecessary as we stood there for hours and hours with thousands of people chanting and marching alongside so many different races and people from different backgrounds.”

“The age demographics were on the lower side — the 20s to 30s. There was no angry mob or violence. Everyone was there for the cause and what really matters,” he said. “Walking around all of Hollywood just seeing all of it boarded up, it felt like the apocalypse was coming and we were just sitting there nicely and doing our thing. It was really surreal.”

He went on to describe the setting in detail, explaining it was “Quite opposite of violent … dozens of people with wagons loaded up with snacks and water. People walking around with trash bags picking up after everyone. The majority of people were in masks. Tuesday was a different perspective. I walked on extremely famous boulevards in Hollywood and never have I ever imagined sitting there with thousands of other people blocking traffic for the cause.”

When asked about the police presence and any potential violence he said, “we were moving around, police had a hard time containing us. They would more or less steer us in directions. We would meander around all of Hollywood. You would run into huge blockades of police. They didn’t want us to go into West Hollywood since it is a separate city from LA. There were huge blockades of sheriffs and the LAPD. Once we got around the Chinese Theater, there is a massive mall next to it. The entire mall was shoulder to shoulder with National Guard forces. They didn’t get in our way. There was no clash between protestors and police that I saw. Definitely some huge presence in certain areas.”

Over the course of these protests, violence has been used as a tool to frame many of the marches and gatherings. He explained “the last three days I haven’t witnessed any violence on both sides. I am super lucky to not witness any of that. Some protestors have goggles and are really ready for things to go down. Fortunately, we didn’t run into anything and it’s a sign that the news isn’t covering the majority of protests that are just doing their thing peacefully.”

Though the protests he attended were peaceful, he witnessed a more sinister side after the sun went down and curfew started. He told Ark Valley Voice “I was out grabbing something past curfew, so I was already a little nervous. I was in a more suburban area of Los Angeles, really away from any protests. I drove past a massive parking lot. What I witnessed was a huge detainment center where cops bus in the people they have arrested, fine them, and book them a court date then dump them off on the street right in the middle of nowhere. Seeing that was absolutely sickening. They had tents and chairs, kind of like a supercenter of getting booked for peacefully protesting. It made me sick and disgusted with the system that we have.”