Wednesday evening, Sept. 18, TheWashington Post reported details and context around the intelligence community whistleblower’s complaint that is currently at the forefront of U.S. political news. Specifically, The Washington Post reported the core of a complaint that an intelligence officer (or official), assigned through at least the summer of 2019 to the National Security Council’s (NSC) national security staff, had knowledge that the president made a promise to a foreign leader during a phone call with that foreign leader.

The intelligence officer found it so troubling, he or she felt the need to file a complaint with the Intelligence Community’s Inspector General (ICIG) under the provisions of the intelligence community Whistleblower Protection Act (ICWPA).

While the ICIG testified before the House Permanent Select Committee on Intelligence (HPCSI) in closed session Thursday, Sept. 19, he did not provide many more details about the complaint. Rather, he explained why the complaint had not been forwarded to the committee as required by the ICWPA.

New reporting by The New York Times Thursday afternoon, both confirms The Washington Post’s reporting from Thursday and expands upon it. According to this new reporting, the complaint involves both a promise or commitment the president made to a foreign leader and multiple other acts about which the intelligence official notified the inspector general. 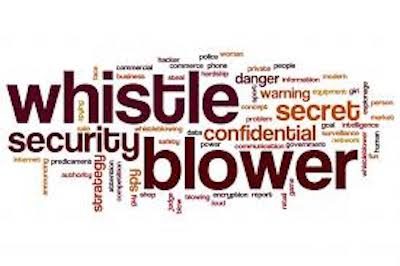 The New York Times confirms earlier reporting that the ICIG did not provide any significant details to the House intelligence committee during his appearance Thursday morning. As of now, we do not know anything about what the promise or commitment was. Unofficial sources are telling national news media that the conversation involved Ukraine. But again, that has not been confirmed. Nor what the multiple other acts were.

While many have begun to compile and compare timelines of known presidential interactions with foreign leaders during the summer of 2019 and speculate on what might have been promised, I want to focus on several other things in this week’s columns, specifically, why the intelligence officer filed their complaint this way, as well as the potential counterintelligence concerns that arise from what we know about the complaint.

This is going to be a somewhat technical post, and I apologize in advance for that. However, since we do not know many of the facts at this point, and because speculation is only going to infuriate partisans on all sides, I think it is better to clarify why things are being done the way they are and what the potential implications of the complaint are.

The reason that the intelligence official took his or her concerns as a complaint to the ICIG is that under the existing law, the ICWPA, he or she had no other lawful option. The law is unfortunately misnamed. When it was drafted as legislation, it did include protections for the intelligence community and national security personnel to bring complaints directly to the appropriate congressional committees for its oversight responsibilities.

As a result of concerns brought by the administration at the time the law was being considered, it was changed to its current form, which removed those protections and requires that complaints be brought to an appropriate Inspector General (IG) who will decide the complaint. That IG then either deems them urgent and credible and sends them on to Congress, or rejects them.

As a result, the law is misnamed; it does not provide any protections to intelligence or national security personnel if they try to blow the whistle to Congress. Ken McClanahan, a lawyer specializing in national security law, classification and clearance issues explained in Just Security:

The ICWPA holds the dubious distinction of being the only “Whistleblower Protection Act” that doesn’t actually include any whistleblower protections. To summarize the law’s extensive history: It originally was intended to protect national security whistleblowers who wanted to go to Congress. However, it was watered down in the final iteration due to separation of powers objections from the executive branch.

While keeping the original – and misleading – name, the final law only really established a mechanism for IC whistleblowers to forward a complaint to the congressional intelligence committees by way of an inspector general. It is a breakdown in this process that [House Intelligence Committee Chair Adam] Schiff is flagging.

What is the ICWPA process?

Simply speaking, if a whistleblower working for an IC agency wants to bring something to the attention of the congressional intelligence committees, they must write up a complaint and give it to either their agency’s inspector general or the ICIG, explicitly stating that it is an ICWPA complaint. The ICIG then has 14 days to decide if the complaint pertains to an “urgent concern” and if it is credible.

I highly recommend the rest of McClanahan’s explainer if you really want to understand what the current process dispute is. Specifically, it concerns the acting director’s refusal to submit the ICIG’s report, as a complaint finding both urgent and credible to Congress. It involves the HPSCI, the acting Director of National Intelligence (DNI), the Department of Justice, and the White House.

Right now, the acting DNI (based on an opinion from the Department of Justice’s Office of Legal Counsel and the White House — presumably the White House Counsel’s Office) is refusing to forward the ICIG’s report based on the Office of Legal Counsel. Its argument: that because it deals with the president, it isn’t urgent since the president is not part of the IC — and therefore not under the purview of the DNI.

This has left acting DNI, Joseph Maguire (who is the actual, Senate-confirmed director of the National Counter-Terrorism Center), in a bind. As the DNI, he is acting only, not Senate confirmed; basically, a caretaker administrator until a director is nominated by the president and confirmed by the Senate, to serve as the DNI.

However, Maguire, a retired vice admiral and Navy SEAL, is the Senate-confirmed Director of the National Counterterrorism Center. Like all Senate-confirmed political appointees, he serves at the pleasure of the president. He does not have Senate confirmation for his current acting assignment. While Maguire is considered to be a straight-shooting, senior military leader and senior appointee, he is caught between a rock and a hard place. The bind: his own IG’s interpretation of the law, and the Department of Justice’s and the White House’s contrary interpretation.

As the U.S. faces a potential counterintelligence problem — this is something that should be of concern to all Americans regardless of political affiliation.