Thinking Security: Holocaust Remembrance Day, Looking Back Is Not Enough

Thursday was Holocaust Remembrance Day. It is important to not just look back, but to also look around. Part of the call for justice after the end of World War II and the Holocaust that accompanied it was to both never forget what the NAZIs and their collaborators and fellow travelers had done and excused. 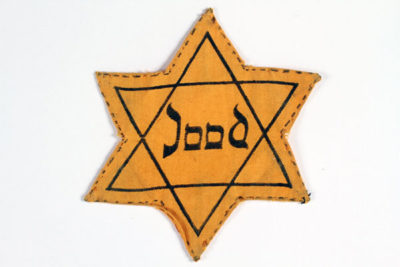 The featured image of a star was the badge that the Nazis of Germany required that all Jewish people wear, beginning in the 1930s, as their systemic persecution began to ramp. Image courtesy of the U.S. Holocaust Museum.

It included the attempted extermination of Jews, as well as the extermination of others deemed undesirable: the Romani, the physically and mentally disabled, those we call today the LGBTQ, and political opponents – but to also never allow it to happen again.

This became the phrase: ‘Never Forget and Never Again’.

Often the ‘never again’ part is interpreted as the need to retell the horrors of the Holocaust so it is never forgotten and can never happen again. Unfortunately, despite a world Holocaust memorial day every January and Holocaust Remembrance Day in April, it is happening again. And,  to quote Eric Bogle’s lyrics about World War I, “again and again and again and again!”

We should start by looking back. this year is also the 76th anniversary of the liberation of Auschwitz and the Auschwitz Memorial has put out an informative twitter thread. I highly recommend you click across to read all eleven tweets in the thread:

Before the 76th anniversary of the liberation of #Auschwitz we bring together the most important facts about the last stage of the operation of this German Nazi camp. See the rest of this [THREAD] below. 1/11 #Auschwitz76 pic.twitter.com/uM9lgmPloz

For those who are unable to get to Poland for a tour of the site and the memorial, the Auschwitz Memorial has a virtual tour at their site.

But for ‘Never Again’ to have any meaning we must also look around. As I type this, there are two ongoing genocides and several other campaigns of extermination or ethno-national (ethnocide) and/or religious (religiocide) cleansing underway.

As I type this the People’s Republic of China (PRC) is engaged in an ongoing genocide of the Uighurs in Xinjiang Province. I wrote about the Uighurs (who are both an ethnic and a religious minority in China) last July, but since then things have both gotten worse and far more detailed information has been reported. Last fall it was reported, thanks to a Uighur woman who escaped from China and then went on the record for a videotaped interview, exactly what the PRC was doing to the Uighurs in Xinjiang. Warning: the video embedded below contains graphic materials.

Around the same time as the video interview presenting first person, eyewitness testimony, a data leak provided a detailed look at how the PRC is indoctrinating and “reeducating” the Uighurs.

This past February, The New Yorker published an excellent long form report on what the PRC is doing to the Uighurs in Xinjiang. A detailed report on the PRC’s violations of the 1948 Genocide Convention can be found at this link. As a result, in January, the U.S. State Department determined that the People’s Republic of China is engaged in an ongoing genocide against the Uighurs, as well as other ethnic and religious minorities.

Unfortunately, China is not the only place where genocide is being undertaken. Myanmar, which has recently returned to the news in the U.S. as a result of the recent coup that overthrew the government and instituted military rule, has been engaging in an ongoing genocide against the Rohingya.

The Rohingya are both an ethnic and religious minority in Myanmar. The plight of the Rohingya has not gone unremarked, since 2013 the U.S. Holocaust Memorial Museum has been calling attention to what they are being subjected to and calling for the U.S. and the international community to intervene on their behalf.

There are also ongoing attempts to ethnically and religious cleanse Christians and other religious and ethnic minorities from parts of the Middle East, Africa, and Asia.

In 2017, the U.S. officially decried the attempted ethnic and religious cleansing of Yazidis, Chaldean (Iraqi) Christians, and Syriac (Syrian) Christians by the Islamic State.

More recently, in the United States, we have seen a sudden and often violent spike in attacks on Asian Americans, as well as Asians who are either permanent residents of the U.S. or visiting. Just yesterday a woman in New York entered a place of business, verbally assaulted and threatened the Asian American staff, then exited and did the same thing to an Asian American man standing outside the shop. That Asian American man was an undercover officer in the New York Police Department and the lady who decided to take her bigotry out for some fresh air and exercise is currently enjoying some quiet time as she waits to be arraigned courtesy of the good citizens of New York City.

This follows on a verbal assault of an Asian American olympic karate training in a public park in Los Angeles, assaults on a number of elderly Asian Americans, one of whom fought back and beat up her assailant, and, of course, the mass shooting/hate crime/domestic terrorist attack on three Asian American owned and operated spas and massage parlors.

In order for ‘never forget and never again’ to have any real meaning, it’s clear that while looking back and remembering is important, bringing the lessons of the past into the present is necessary. While there is little each of us can individually do for the Uighurs, the Rohingya, the Yazidis, the Chaldeans, or the Syriacs, we can refuse to look away. We can make sure that our elected officials hear from us on these issues in order to promote the development of appropriate policies and strategies to bring these genocides, ethnocides, and religiocides to an end.

At the individual level we can do something about the increases of anti-Asian American prejudice, discrimination, hatred and violence. We can work to not give in to the jingoism that somehow Asian Americans, an exceedingly diverse community that spans Americans descended from dozens and dozens of ethno-nationalities, are all responsible for COVID-19, just because it originated in China.

Yes, China is in Asia, and Asian Americans are descended from people from Asia. However, Asian Americans are no more responsible for what the PRC is doing right now – whether dealing with the Uighurs, its policies and actions towards Hong Kong and Taiwan, or its initial handling of COVID 19 – than Americans of Swedish descent are responsible for anything that is going on in Sweden. Just as we can work to not give in to the stereotypes and prejudices that are used to inflame hate and promote intolerance against a number of other ethnic and religious minorities in the U.S.

By recognizing our common humanity, regardless of our skin color or where our ancestors came from or what religion we adhere to or don’t adhere to, we can live up to the phrase never forget and never again. We have it within ourselves to be better. To treat each other better. To celebrate the vibrancy that America’s diversity brings to all of our lives. To live up to the original national motto: E Pluribus Unum. “From many, one”.

Editor’s Note: For more about the Holocaust, visit https://www.ushmm.org/collections/the-museums-collections/browse