Thinking Security: Memorial Day 2021 and Those Who Want Us To Destroy Ourselves For Their Own Profit and Amusement

Memorial Day has assumed a strange place within American civic culture. It has become the Federal holiday that signals the start of summer, while at the same time, because of the changes to how Americans respond and relate to the U.S. military, has become a de facto second Veteran’s Day. And, of course, for those that have served, or those related to them, or those who have known them as more than passing acquaintances, and those who have some civic self-awareness, the holiday retains the purpose it was given during World War I: to commemorate America’s war dead.

Three years after the Civil War ended, on May 5, 1868, the head of an organization of Union veterans — the Grand Army of the Republic (GAR) — established Decoration Day as a time for the nation to decorate the graves of the war dead with flowers. Maj. Gen. John A. Logan declared that Decoration Day should be observed on May 30. It is believed that date was chosen because flowers would be in bloom all over the country.

The first large observance was held that year at Arlington National Cemetery, across the Potomac River from Washington, D.C.

The ceremonies centered around the mourning-draped veranda of the Arlington mansion, once the home of Gen. Robert E. Lee. Various Washington officials, including Gen. and Mrs. Ulysses S. Grant, presided over the ceremonies. After speeches, children from the Soldiers’ and Sailors’ Orphan Home and members of the GAR made their way through the cemetery, strewing flowers on both Union and Confederate graves, reciting prayers and singing hymns.

Local Observances Claim To Be First

Local springtime tributes to the Civil War dead already had been held in various places. One of the first occurred in Columbus, Miss., April 25, 1866, when a group of women visited a cemetery to decorate the graves of Confederate soldiers who had fallen in battle at Shiloh. Nearby were the graves of Union soldiers, neglected because they were the enemy. Disturbed at the sight of the bare graves, the women placed some of their flowers on those graves, as well.

Today, cities in the North and the South claim to be the 1866 birthplace of Memorial Day. Both Macon and Columbus, Ga., claim the title, as well as Richmond, Va. The village of Boalsburg, Pa., claims it began there two years earlier. A stone in a Carbondale, Ill., cemetery carries the statement that the first Decoration Day ceremony took place there on April 29, 1866. Carbondale was the wartime home of Gen. Logan. Approximately 25 places have been named in connection with the origin of Memorial Day, many of them in the South where most of the war dead were buried.

In 1966, Congress and President Lyndon Johnson declared Waterloo, N.Y., the “birthplace” of Memorial Day. There, a ceremony on May 5, 1866, honored local veterans who had fought in the Civil War. Businesses closed and residents flew flags at half-staff. Supporters of Waterloo’s claim say earlier observances in other places were either informal, not community-wide, or one-time events.

By the end of the 19th century, Memorial Day ceremonies were being held on May 30 throughout the nation. State legislatures passed proclamations designating the day, and the Army and Navy adopted regulations for proper observance at their facilities.

It was not until after World War I, however, that the day was expanded to honor those who have died in all American wars. In 1971, Memorial Day was declared a national holiday by an act of Congress, though it is still often called Decoration Day. It was then also placed on the last Monday in May, as were some other federal holidays. 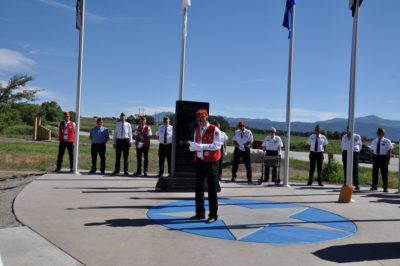 The dedication of the Chaffee County Veterans Memorial site in Poncha Springs, at the intersection of U.S. 50 and U.S. 285. Photo by Stephen Hall.

All of this together is a strange civic cultural mashup; especially because Americans think of ourselves as a peace-loving, only-going-to-war-as-last-resort, society. The truth, however, is that we have so many war dead to remember because the U.S. has been at war in 236 of its 245 years as a nation.

As Memorial Day 2021 comes around, there are those that seem to have missed the point entirely. Instead of focusing on those who gave their last full measure of devotion, they have instead decided to weaponize the commemoration and the holiday as part of their ongoing attempts to pit Americans against each other. Their goal; there is far too much profit – both financial and political – to be made by making Americans angry with each other.

The first comes from Fox News, whose own terms of use assert that it is not actually a news organization; that it “furnishes the Company Sites and the Company Services for your personal enjoyment and entertainment.”

Fox has also argued that its biggest star, Tucker Carlson, is not providing factual analysis and commentary and, as a result, no reasonable viewer can believe what he says during his Fox News show. These two tweets were sent less than half an hour apart. The first at 7:33 p.m. on May 29  and the second at 7:55 p.m. on the same day. 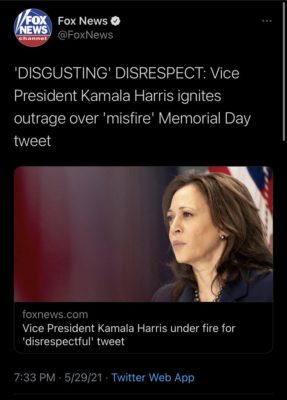 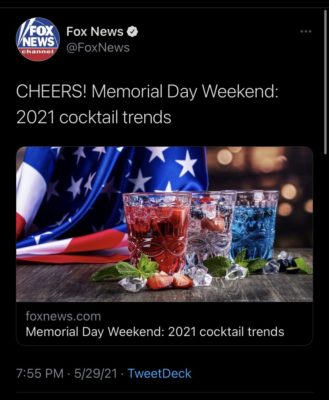 Here’s Vice President Harris’s actual tweet that Fox is referencing in their first tweet above, 20 minutes or so before they tweeted out the much more respectful of the fallen cocktail recipe recommendations for Memorial Day.

Hypocrisy, as they say, is the tribute that vice pays to virtue, but what Fox wanted to happen was to get people angry. By highlighting Vice President Harris’s May 29 tweet (which is not the actual Memorial Day tweet that her public affairs team will tweet on Memorial Day itself), they provide a way for others to also get people angry. Like for Ambassador Haley on May 30:

That would be the same Nikki Haley who worked for former President Trump who referred to America’s war dead as “losers and suckers” and could not be bothered to condemn him for doing so even after the reporting was confirmed by numerous sources including Gen. (ret.) Kelly who was the person that Trump said it to. The same General Kelly whose son was killed in action in Afghanistan.

In fact, here is former President Trump’s official Memorial Day 2021 statement. You’ll notice he’s made no mention of U.S. military personnel, veterans, or those killed or even wounded in action. He does wish everyone a great Memorial Day weekend though!

“With Memorial Day Weekend coming up, tomorrow people start driving in the biggest automobile days of the year. I’m sorry to say the gasoline prices that you will be confronted with are far higher than they were just a short number of months ago where we had gasoline under $2 a gallon. Remember as you’re watching the meter tick, and your dollars pile up, how great of a job Donald Trump did as President. Soon Russia and the Middle East will be making a fortune on oil, and you will be saying how good it was to have me as your President. Wasn’t it great to be energy independent, but we are energy independent no more. Shame, shame, shame. Other than that, have a great Memorial Day Weekend!”

Not to be outdone in the attempt to separate Americans from Americans in advance of Memorial Day, Congresswoman Lauren Boebert (R-CO) decided she wanted a piece of the action.

Joe Biden ignored the Rolling To Remember rally today. Not surprised. I guess if there’s no young girls to flirt with from the stage he’s no longer doing events. 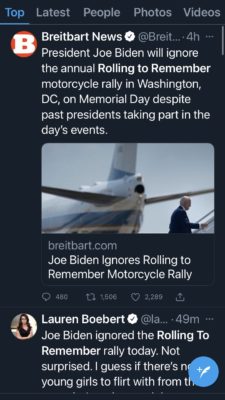 What Congresswoman Boebert, as well as Breitbart News, failed to inform anyone of is what President Biden actually did on Sunday. Just like he does every Sunday, President Biden attended Catholic Mass. And just as he does every Sunday that he is in Delaware he did it his parish church and immediately after the service ended he went and visited his son Beau’s grave. Today is the anniversary of his son’s death.

The Bidens visited Beau Biden's gravesite on the anniversary of his death this morning in Wilmington. The family laid flowers at his gravesite and President Biden shared an embrace with Beau's son Hunter.
🎥 via CNN's Adolfo Ibarra pic.twitter.com/zxtvnCwr5V

But he didn’t stop there, he actually went and gave a Memorial Day speech.

Commander in Chief Biden spent this Sunday 1) at church, 2) at his Army veteran son’s grave (it’s the anniversary of his death), 3) and then giving a Mem Day speech at Veterans Memorial Park near the Delaware Memorial Bridge. https://t.co/m4oNJxroKJ

Between Wednesday and yesterday, I sent “have a great weekend” in emails (right above my signature or in text messages) to five different general officers a couple of colonels, and a couple of lieutenant colonels. Some of these emails and texts were work-related. Some were regarding volunteer work I do with one of the lieutenant colonels. One was just a regular email. This is how normal people communicate.

Today, as is my normal routine for Memorial Day, I will get up, get my dogs out, fed, go back out, and then fly my American flag because it is a national holiday. Provided it is not raining. I’ll work out. Eat several meals. But I’ll also spend a great deal of time with the departed.

I don’t do picnics or parades or parties, but it is a free country, or, perhaps more accurately, a self-governing democratic-republic where we, as self-governing citizens, have the liberty to do as we will. So if parades, picnics, and/or parties are your thing, that’s great! And if they are not, that’s great too!

Memorial Day, as it was evolving out of Decoration (of the war dead’s graves) Day, was a way to begin to, as President Lincoln said, bind the nation’s wounds. One day to focus on those who gave everything for the rest of us. Remembering that reality and acknowledging them is the real meaning of Memorial Day, not using it as misinformation and agitprop to set us at each other’s throats for profit.

We would all be a lot better off if we spent more time focusing on binding up each other’s wounds and less time trying to figure out ways to rip them further open. Or being manipulated by those whose only interest is doing so.

A happy, safe, and healthy Memorial Day to all of you however you decide to celebrate it.

Rest well Terry, Greg, Nicole, Paula, and Mike. We have the watch.