Editor’s note: This is Part II of this week’s Thinking Security column by Adam Silverman.

With the revelation Wednesday by The Washington Post, that the details and context around an Intelligence Community (IC) whistleblower’s complaint, the general public might not be aware of the intricacies of what is occurring in Washington, D.C. The complaint concerned the President of the United States and a promise or request made to a foreign leader during a phone call with that foreign leader, which might compromise our national security.

That senior intelligence officer was assigned, through at least the summer of 2019 to the National Security Council’s (NSC) national security staff to the White House. As reported, the official was so concerned by what had occurred, that a formal complaint was filed. Part I  of this column detailed the reasons why the intent of the Whistleblower Protection Act appears not to be working as envisioned.

Acting Director of National Intelligence (DNI) Jospeh Maguire will testify before the House Permanent Select Committee on Intelligence (HPSCI) next week. Maguire (he is the actual, Senate-confirmed Director of the National Counter-Terrorism Center, but only the acting Director of National Intelligence) is basically a caretaker administrator until the president nominates a director, who must be confirmed by the Senate to serve as DNI. This situation provides an example of why it is a bad idea for this, or any future administration, to heavily rely on acting, senior appointed officials. Even Senate-confirmed top political appointees, like cabinet secretaries and the DNI, serve at the pleasure of whichever president appoints them. Senate confirmation provides a layer of protection so that those appointees can act independently for the public good while still trying to fulfill the president’s agenda. 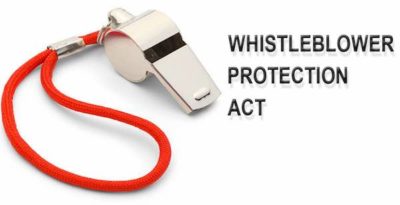 What we know of the intelligence officer’s complaint raises a major counterintelligence concern. There are several reasons for this. Despite what I’m sure will be attempts to make them partisan issues in our domestic political disputes, those concerns exist; regardless of what the president may have promised that foreign leader, whether the promise is a good idea or a bad one, or whether the promise is good for U.S. interests or bad for them.

In an attempt to cut down on information leaking by White House officials that has plagued every administration, the Trump administration stopped releasing summaries and read-outs of calls the president had with foreign leaders. The president also had limited note-taking for his phone calls and limited distributions of the transcripts of those calls to curb the leaks. He also recommended to foreign leaders that they call him on his unsecured cell phone instead of on the official White House system.

He has also limited note-takers and transcripts for other interactions with foreign leaders, including his one-on-one meetings with Vladimir Putin and Kim Jong Un. We also know that foreign intelligence services have been setting up mobile surveillance near the White House to intercept the president’s unsecured phonecalls. The Israelis have been specifically identified as one of the culprits doing the surveillance.

This is where the counterintelligence concerns arise. It goes without saying that the president is unconventional. He came to the office without any previous political or public service experience. His administrative or executive experience was in running his family business, the Trump Organization, and a second and long career in reality television. The president’s unconventional approach to communicating with foreign leaders, outside advisors, and others, however, creates a counterintelligence problem for him and the United States.

That counterintelligence problem exists regardless of what he may, or may not, have promised a foreign leader over the series of phone calls and interactions at the heart of the intelligence official’s complaint. It exists whether or not it is good for the U.S. and American interests.

By getting rid of note-takers, getting rid of readouts and summaries, either eliminating or extremely restricting transcripts of his phone calls and meetings, and by often using an unsecured cell phone, the president has made it all but impossible for officials in his administration to actually document and know what he is saying to, and hearing from, the foreign leaders he is interacting with.

This places the president, and by extension, the United States, at the mercy of these foreign leaders. Right now, we do not know with whom the president was speaking to in these phone calls. It would be a safe assumption that the foreign leader was making a recording of the call, as well as having a note-taker taking detailed notes.

This provides that foreign leader with leverage over the president, and the United States, should he or she choose to use it. While those governments can disclose as much or as little of the conversations (and spin them) however they want, the United States’ government has limited information about the communications. The U.S. is, therefore, operating at an asymmetric disadvantage.

The same problems exist for the president’s one-on-one meetings with Putin and Kim. We have no officially documented notes or transcripts representing the U.S. side of the meetings. If you think that Putin and Kim didn’t record those meetings, I have a bridge and some beachfront property to sell you.

We do not know which foreign leader the president spoke with, or what, if anything the president promised that foreign leader. We don’t know if the promise is good for the U.S.’s national interest, or bad for it. We do not even know how the intelligence official came to know this information.

That is the major counterintelligence problem for the United States at this moment — something that should be of concern to all Americans regardless of political affiliation.