Widespread Testing for COVID-19 is Necessary To Provide Decision Makers With Timely, Accurate Information To Create a Strategy to Reopen the Economy.

As of 8:16 PM Eastern Daylight Time Friday, 2,360,512 Americans across all 50 states, the District of Columbia, and the US territories have been tested for the coronanvirus known as COVID-19. This is based on the COVID Tracking Project’s daily cumulative totals. With a population of 330,570,917, this means that .714 percent of the U.S population has been tested for COVID-19.

Let me be clear about this: less than one percent of all Americans have so far been tested for COVID-19. Over the past two weeks the number of tests being administered per day in the U.S has increased from 100,000 to 135,000 per day. While that is a 35 percent increase in daily tests, during that same two week period there has been an almost 500 percent increase in number of COVID-19 infections in the US; an 82 percent  increase in the number of daily cases; and a six percent increase (from 17 to 23 percent) in the percentage of American testing positive. 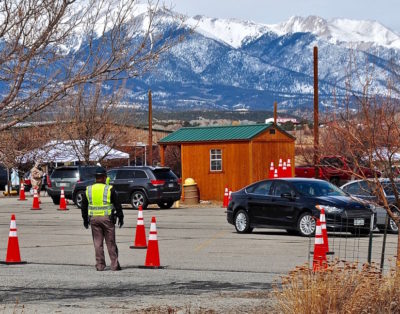 The bottom line is that we do not have timely, accurate information about the spread of the disease across the U.S. and within states, regardless of whether it is spreading in urban, suburban, semi-rural, or rural areas, because we are not testing enough.

NPR reported yesterday that the Trump administration was going to end the Federal funding for state and municipal testing sites on Friday April 10th. This would have been disastrous.

The United States is not a confederation; either in the sense of the Articles of Confederation or the Confederate constitution. It is a federal system that divides powers, authorities, and responsibilities among the U.S. government, the state governments, and municipal governments. Right now states and municipalities are financially strained because of the economic downturn resulting from the coronavirus (SARS-CoV)2 and COVID-19 pandemic. States do not have the financial reserves to pay for wide scale testing. Nor are they allowed to deficit-spend to do so. Only the federal government has the ability to backstop this effort.

The good news is that someone in the Trump administration reversed this decision today. The Department of Health and Human Services (HHS) has announced that states now have a choice: they can either take over and fund testing themselves or they can continue to rely on federal funding and oversight to continue testing. The reversal of this decision is good news.

The only way that it will be possible to re-open the U.S. and begin to get people back to work without risking a second wave of community spread based infections is to test widely. Testing widely means not only doing the slow RNA tests to determine if someone is currently infected, but also the faster antibody (serology) tests that are beginning to come online. These tests will indicate if someone is, or was, infected with COVID-19. It is these rapid antibody tests that will have to be administered repeatedly, until either a treatment, or a vaccine for COVID-19, is developed and determined to be both safe and effective to combat COVID-19 in humans.

The timely, accurate data derived from testing as many Americans as possible is what federal, state, and local decision makers need, in order to make the best decisions possible about how to respond to COVID-19. This includes how long Americans need to socially isolate and shelter in place.

As the federal government continues its efforts to respond to the pandemic by getting necessary supplies to states and municipalities — personal protective equipment (PPE), ventilators, and other necessary medical supplies — it needs to seriously increase the amount of testing for COVID-19. The only way to know where to direct the necessary supplies and to be able to make the best decisions possible in responding to the pandemic is to using timely, accurate information about its spread. The only way to have timely, accurate information about the spread throughout the U.S. is by widespread testing.